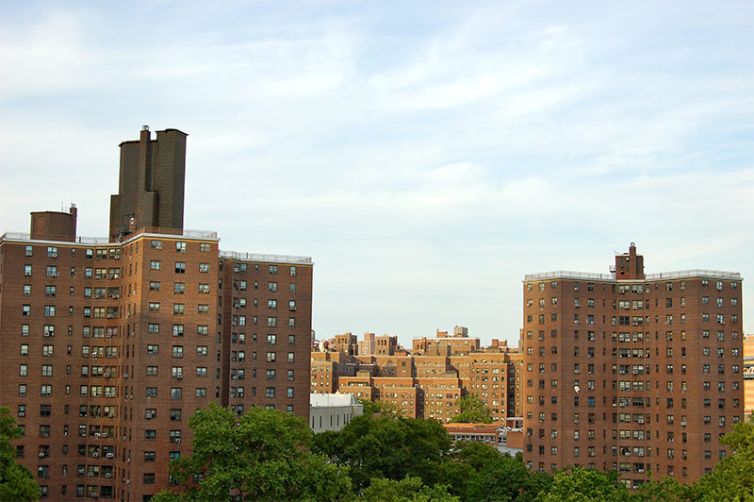 The cash-strapped New York City Housing Authority is taking a giant leap into the 21st century.

NYCHA and the Fund for Public Housing, a nonprofit created to fundraise for the agency and forge public-private partnerships, hosted an event Tuesday night where real estate tech startups pitched ways to improve the agency’s aging, poorly maintained buildings.

The tech event comes as the agency faces hard times, with the potential of losing millions in federal funding. As a result, NYCHA has been looking for ways to fix up its buildings and reduce energy costs without getting hit with a hefty tab.

The authority stands to lose $370 million in funding under President Donald Trump, thanks to a proposed $7.4 billion budget cut to the federal Department of Housing and Urban Development. NYCHA is the city’s largest landlord and the country’s largest public housing authority, housing 400,000 low-income New Yorkers.

“In a city where more than half of New Yorkers pay more than 50 percent of their income towards rent, let alone our residents that are struggling to pay their rent already, these cuts are devastating,” NYCHA Chairwoman Shola Olatoye told Commercial Observer.

Even in the face of a bleak financial future, Olatoye is trying to push forward with NYCHA’s controversial NextGen plan, which calls for upgrading the authority’s 2,500 existing buildings and developing new residential projects to generate extra revenue. The agency needs $17 billion to bring its buildings and infrastructure up to modern standards. One pillar of the plan involves using technology to “improve customer service and increase efficiency,” and another calls for developing a sustainability agenda and reducing the agency’s carbon footprint. The startup competition aims to address both those goals.

“To be in the center of innovation and problem solving, to actually connect with those thinkers is really important to help us work smarter, be more efficient with our resources and ultimately improve the quality of life for our residents,” Olatoye said. “In times of crises, you have to find a way to leverage resources for the long-term and this gives us a great platform to see what might be possible.”

Ten companies gave brief presentations on how their technology could aid NYCHA leadership, maintenance workers and tenants. At the end of June, public housing officials will choose three proposals to pilot in a handful of NYCHA buildings from July to October.

Several firms served up promising proposals. One company, hOM, provides on-demand amenities to roughly two dozen large apartment buildings in Manhattan and Brooklyn, and it wants to do the same for NYCHA. The service offers weekly group fitness classes (yoga, core work, meditation) in whatever space a landlord has available, whether it’s a conference room, basement, or courtyard, and it organizes a monthly social calendar with activities for tenants. The company also helps tenants organize their own events, like communal dinners or bike rides. Co-founder Ryan Freed proposed offering two classes at one NYCHA property to gauge residents’ interest in the service.

Two startups presented relatively simple solutions to improve the wasteful heating and cooling systems in many of the agency’s outdated buildings. Radiator Labs pitched a cover that shrouds radiators, trapping steam inside the pipes and preventing the steam from condensing till cool air can be added and then released to the room. The device has a fan that turns on and circulates hot air when the room drops below a set temperature. Then it shuts off once the room is warm enough. It helps landlords stabilize the temperature in apartments and save on fuel costs.

A second firm, ThinkEco, tackled the cooling side of things. Its seven-year-old invention, the Modlet, is essentially a Wi-Fi-connected power outlet that tenants can control with a smartphone app or a web portal. It allows residents to turn their air conditioners on and off remotely and schedule specific times for the A/C to run. ThinkEco also built a rewards platform that offers incentives for users to save energy.

A handful of startups floated money-saving solutions that involved installing sensors in NYCHA buildings to track energy usage. A company called Carbon Lighthouse claimed it could help landlords slash their energy use by up to 30 percent by collecting data on electricity, gas and steam heat from sensors and upgrading inefficient mechanical systems. Another one, PanSofik, proposed putting in sensors that detect temperature, humidity, light and human presence and beam that data back to secure servers.

“You could put a sensor in a hard-to-reach place under the roof, and if the roof started leaking, [the sensor system] would send a text or email to the building management team,” said Tony Bowden, a partner in PanSofik.

The final presenter, Connell McGill of Enertiv, said his company could offer not only sensors but custom-built meters that track HVAC and utilities and can predict when certain mechanical systems, like fan belts, will fail.

When asked how his pilot would work for NYCHA, he replied, “I noticed that only a sixth of your non-residential tenants are direct metered by the utility. You’re leaving about $20 million on the table every year. We could help you recover that immediately.”