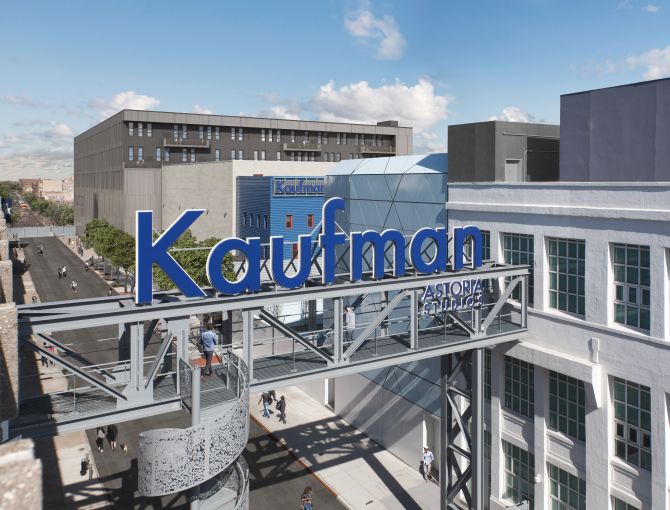 The new Gluck + Architecture building will have two new stages—one of 16,000 square feet and another of 9,000 square feet—on the ground floor, with 6,000 square feet for support space, according to a spokeswoman for JRT Realty Group, the project’s office leasing agent.

The woman-owned brokerage will lease the roughly 68,000 square feet of office space on three fours of the planned four-story building between 34th and 35th Streets. Kaufman Astoria broke ground on the project at the site of a former parking lot last month, with completion slated for spring 2019.

The building will be part of an existing 500,000-square-foot film studio campus, which currently has nine stages, support facilities for production companies and a restaurant called The Astor Room.

Crain’s New York Business broke the news last year about the new building, but the scope of the office section of the project has expanded since.

“This is a great opportunity for tenants in the creative and media industries to build their brand and take advantage of brand new office space in a convenient location,” said JRT Realty President Greg Smith, who will represent the landlord with colleagues Ellen Israel and Lauren Calandriello. We look forward to working on such a momentous project.”

Notable works that used production stages at Kaufman Astoria include Men in Black 3, Sesame Street and Orange Is the New Black.

The campus was built in 1920 as the original home for Paramount Pictures. Kaufman Astoria Chairman George Kaufman, who is also the chairman of Kaufman Organization, acquired the property in 1980.

“We’ve believed in and invested in this neighborhood for over 40 years, and we’re thrilled to continue to expand and grow here,” Hal Rosenbluth, the president and chief executive officer of Kaufman Astoria, said in a prepared statement.