Inside Edison Properties’ Plans for a Newark ‘Renaissance’ 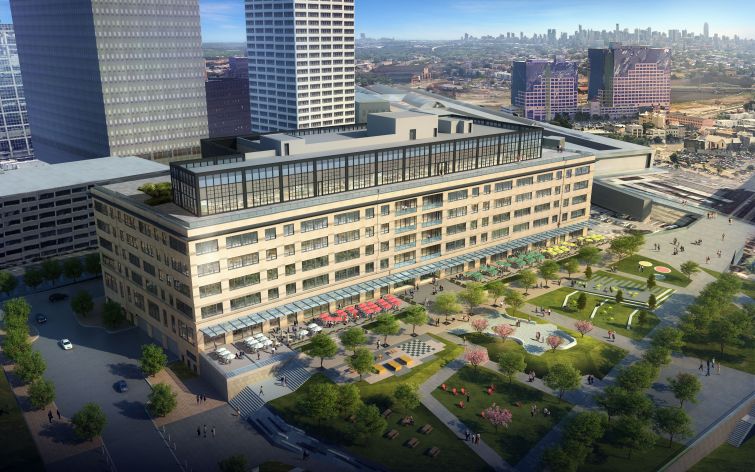 After decades of being shunned and written off, Newark, N.J., has seen something of a rise of late.

This makes now the perfect time for Newark-based Edison Properties, best known for its Edison ParkFast and Manhattan Mini Storage brands, to dive into that pool in its own hometown.

The firm, founded by the Gottesman family in 1956, is currently developing Ironside Newark, a seven-story, $80 million speculative office project located at the corner of Edison Place and McCarter Highway (Route 21) in Newark, astride a burgeoning park that will be known as Mulberry Commons. (The City of Newark is developing the park on the site of the former Triangle Park, along with a pedestrian bridge that will connect much of the area. Edison is making another $20 million investment in the construction of the bridge and various park-related infrastructure elements.)

Perkins Eastman is the designer for the renovation of the 456,000-square-foot building, which is expected to house two stories, or 100,000 square feet, of retail, and at least five floors of office space, totaling around 350,000 square feet—one of the retail floors may host some offices as well—and will start taking on tenants in fourth-quarter 2018.

Edison believes the project is a major step toward Newark’s emergence as the next hot and happening city.

“Newark is undergoing a renaissance as far as we’re concerned,” said Michael Sommer, the executive vice president of development at Edison Properties. “There’s a tremendous amount of activity and business coming out of the city today. There are residential buildings being constructed to a level of quality that otherwise wouldn’t have been justifiable not too long ago but have been found to be very successful. The [city’s current] administration, and especially Mayor [Ras] Baraka, have been great partners. They understand the importance of development and doing it intelligently and methodically.”

All this good news for Newark is long overdue. Since the city’s 1967 riots, where four days of mayhem left 26 people dead, Newark has often been thought of as a crime-ridden hellhole, even being named “The Most Dangerous City in the Nation” by Money Magazine as recently as 1996.

But the past few years have seen Newark on an upswing. Last December, city officials announced that the city’s crime rate was its lowest since the riots. And despite being named the worst American city in which to start a business in 2015 in a much-publicized study by WalletHub, the varied likes of Audible, Newark native Shaquille O’Neal, architect Richard Meier and the Wyndham Hotel chain all have projects or investments in the works there (see Newark sidebar).

“Edison has a sense of what Newark needs, and the direction we’re heading in,” said Aisha Glover, the president and chief executive officer of the Newark Community Economic Development Corp. “I don’t have to explain everything to them, or worry about them getting up to speed. It’s night and day when you work with a developer that gets it and is really committed to their city.”

The Ironside Newark project evolved out of an old land deal related to the development of the city’s Prudential Center arena, which opened in 2007. According to Sommer, before the arena site was locked down, a group of local stakeholders considered building it adjacent to or even atop Newark Penn Station, similar to how Madison Square Garden sits above Pennsylvania Station in Manhattan.

Edison Chairman Jerry Gottesman proposed that if the arena were placed several blocks away instead, the land in between would be ripe for development.

“After many conversations and [his] really selling the concept, the Prudential Center ended up in its current location as a result of his vision,” Sommer said.

Edison evaluated the potential for residential development on the site but ultimately rejected it as too expensive.

“The floor plates don’t really allow for a residential play—they’re just too expansive,” Sommer said. “You need to have a window line for each of the apartments. The only resolution for that would have been cutting out a significant light well in the center of the building, or maybe two light wells. It was cost prohibitive, to say the least.”

Edison decided on the site for its first Newark office development due to several factors.

“Given that the park and the bridge are really the centerpiece of this whole area, we decided that getting started directly adjacent to the park made a lot of sense,” Sommer said. “We want to bring life, a 24/7 atmosphere at some point, to the park and the whole downtown corridor. But in addition, and especially before the bridge is constructed, coming from Newark Penn Station, Ironside Newark is the entryway to Mulberry Commons. So to have a vacant warehouse sitting there, or even a demolished warehouse with a vacant site sitting there, is not really creating interest, and not contributing to the ultimate success of the area. That didn’t make any sense to us.”

The project is being adapted from the former Newark Warehouse—a roughly 400,000-square-foot, six-story building constructed in 1907 that was purchased by Edison in 2014 for $7 million.

“The original purpose of the building was to allow freight trains to enter to load and unload goods, then for some of those goods to be stored, but others to continue on in transit to other locations,” Sommer said. “More recently, the building was used simply for storage and has been vacant for a few years now.”

“We recognized early on the character inherent in this type of structure, the bones in this structure,” Sommer said. “It’s concrete and steel. [Built] at a time when people weren’t hyper-focused on the cost of commodities, because the numbers were very different back then, there’s a tremendous amount of character in the structure. There are significantly large beams with exposed rivets…this is the type of space today’s office users are seeking out. And it doesn’t exist on our side of the river.”

Edison kicked off construction in late April, adding a seventh-floor glass penthouse to the existing structure, readapting the upper floors for loft-style offices and adding terraces throughout. There will also be 300 openings cut into the building for windows, and existing horizontal openings will be extended vertically.

“Natural light is not necessarily an important feature in [a warehouse],” Sommer said. “In an office building, of course, the opposite is true.”

The building’s unique particulars will also make its retail a tad complicated. Given its role as a freight destination—train tracks ran through the building itself—the grade on the north and south sides are on different levels due to the presence of a train trestle.

To connect the pieces and make the new area feel like a real neighborhood, the city is developing a pedestrian bridge that will connect the Prudential Center, Mulberry Commons, Ironside Newark, the platforms in Newark Penn Station and the nearby Ironbound neighborhood.

“Theoretically, someone coming from the Ironbound or coming or going to [Newark] Penn Station will be able to come out directly into the park, and into Ironside Newark or any of the other future development sites—or the arena, for that matter—without having to come onto street level,” Sommer said.

Sommer said the company hopes construction will be completed, with tenants moving in, by the beginning of the fourth quarter of 2018.

Ironside Newark was initially expected to be a home for STEM—science, tech, engineering and math—clients. (“I think the generalization is that tech firms are the ones looking for this type of raw space,” Sommer explained.)

But Edison has picked up interest from different kinds of tenants.

“We have received proposals from firms in any industry you can imagine,” he said. “We’ve had interest from engineering firms, architecture firms, construction firms, food-related businesses and from tech firms. The generalization is that tech firms are the ones looking for this type of raw space, but we have found that it really appeals to a wide variety of businesses.”

The idea is for Mulberry Commons and Ironside Newark to be a resource for those currently living in Newark, as well as a marker of growth for possible new residents.

“This is certainly for the residents of Newark and the office tenants and students in Newark—there are 60,000 students and facility members in the schools in Newark, which is a staggering number,” Sommer said. “But in addition to that, we see this as a future opportunity for people who might be priced out of the boroughs, and even in some cases in Jersey City and Hoboken, because prices have really skyrocketed on the Gold Coast as well.”

The project is a departure for Edison, which has focused more on parking lots, storage and, as Sommer described, “land assemblage.” According to the company, Edison owns over 3 million square feet of property in Brooklyn and Manhattan alone, with several million more in other cities including Newark, and employs close to 600 people. While it doesn’t reveal details on how many lots its own, Edison ParkFast owns and operates lots throughout New York, New Jersey and Maryland.

The project brings Edison back to its origins, as the company’s first lot was purchased by Joseph Gottesman on Edison Place in Newark in 1956. Gottesman brought his sons, Harold and Jerry, into the business, and together they built it into a parking and storage behemoth. Harold served as the company’s president until his retirement in 1998 and passed away in 2001—Jerry still serves as the company’s chairman. Last June, the website NJBIZ named him one of New Jersey’s 50 richest people, with an estimated net worth of $650 million.

Ironside Newark came about in part because of Baraka, whose administration has seen the importance of this sort of development for the city.

“Ironside Newark marks a major milestone in the comeback of our downtown,” Baraka said in a statement to Commercial Observer via email. “With its loft-style offices and its ground-level retail and restaurants, Ironside Newark together with Mulberry Commons will be a catalyst for realizing our vision of an exciting 24-hour destination city. Its strategic location will spur the continuing development of the Penn Station area as New Jersey’s most important and creative transit village.”

While Ironside Newark and Mulberry Commons are a significant shift in the Newark landscape, Sommer, who noted that Edison owns more of the undeveloped land surrounding the park, hopes this is just the beginning of a vibrant new phase for the city.

“I’m hopeful that Ironside Newark is the first of several [developments for us], around Mulberry Commons and maybe throughout Newark in general,” he said.