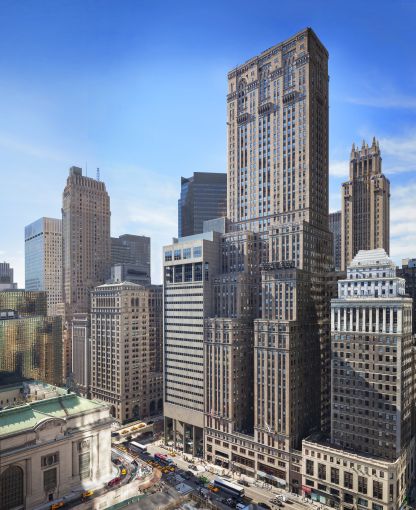 The public review process for the Midtown East rezoning is nearing the finish line. The City Planning Commission voted unanimously this morning to approve the upzoning, which is expected to pave the way for 6.8 million square feet of new office and retail.

Marisa Lago, who chairs the CPC and is the director of the Department of City Planning, gave a brief speech before casting her vote at Wednesday’s meeting.

“This is a momentous occasion,” she said, acknowledging that the other commissioners had been waiting for the rezoning far longer than she had, because she was only chosen to head the agency in March. She touted that the plan was “remarkably similar to the [Midtown East] steering committee’s recommendations—a testament to the power of inclusive planning.”

Lago also praised DCP, which oversees the city’s zoning, for incorporating suggestions during the planning process, noting that the proposal “now includes commitments from the administration to implement several above-grade pedestrian realm improvements.”

Next, the City Council will vote on the rezoning, wrapping up the seven-month-long Uniform Land Use Review Process. Councilman Dan Garodnick, who helped develop recommendations for Midtown East on a steering committee with Manhattan Borough President Gale Brewer, will have the deciding vote when the rezoning reaches the Council.

The proposal allows builders to take advantage of extra floor area by choosing one of three different options: tapping into a pool of 3.5 million unused air rights from landmarked buildings, funding public transit or streetscape improvements, or rebuilding an office development that is built larger than current zoning allows.

The city’s proposed price for the landmarked air rights—a minimum of $78.60 a square foot or 20 percent of the sale price, whichever is higher—assumes that the air rights would sell for at least $393 a square foot. The lofty estimate has irked owners of landmarked properties, such as the Archdiocese of New York, who argue that it assumes a much higher price than their air rights are likely to fetch on the open market.

“We think the floor price for the air rights is already unnecessary and unfair,” New York Landmarks Commission President Peg Breen told Commercial Observer in March. The Real Estate Board of New York has also lobbied against the city’s proposed air rights floor, claiming that it will push up development costs and prevent deals from being done.

Garodnick also rolled out a bill yesterday to audit air rights sales in the soon-to-be-created Midtown East special district, which could create a way to alter or eliminate the air rights floor price.

“We are exploring ways to protect the integrity of the air rights transfer process in East Midtown, and an audit could be one way to do that,” he said via a spokesman. “To ensure that it remains an option as we evaluate the proposal, we need to get the legislative process started now.”