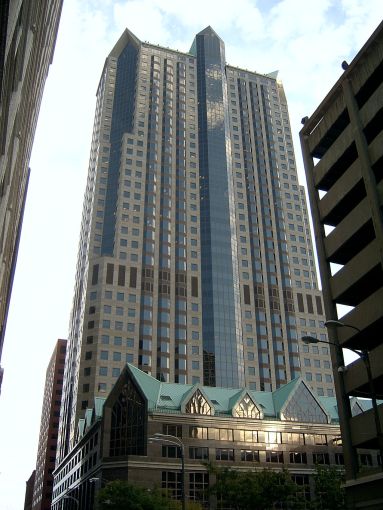 The $124 million loan backed by the Metropolitan Square office skyscraper in Saint Louis, Mo., has been sent to special servicing, according to an alert from Fitch Ratings. Soaring 593 feet into the sky, the 42-story tower is the tallest building in the city.

The loan, which was transferred to special servicer LNR Partners for imminent maturity default on Tuesday, comprises 39 percent of the remaining collateral in the Wachovia Bank-sponsored WBCMT 2005-C21 commercial mortgage-backed securities transaction.

The 937,800-square-foot property is owned by The 601W Companies and located at 211 North Broadway in downtown St. Louis. Its largest tenant is law firm Bryan Cave, which leases 233,286 square feet on a lease that expires in June 2022, according to data from Trepp.

According to Trepp, the loan was transferred to special servicing once before in August 2012 due to cash flow shortfalls. The loan was then modified—its rate changed to 4.25 percent from 5.32 percent and its maturity extended by two years to August of this year—and returned to servicer Wells Fargo. The 2012 modification allowed for three one-year extensions; the borrower has exercised its second loan extension to Aug. 11, and a remaining one-year option still exists “if a certain debt yield test is met,” according to servicing commentary.

Officials at The 601W Companies did not immediately return a request for comment.