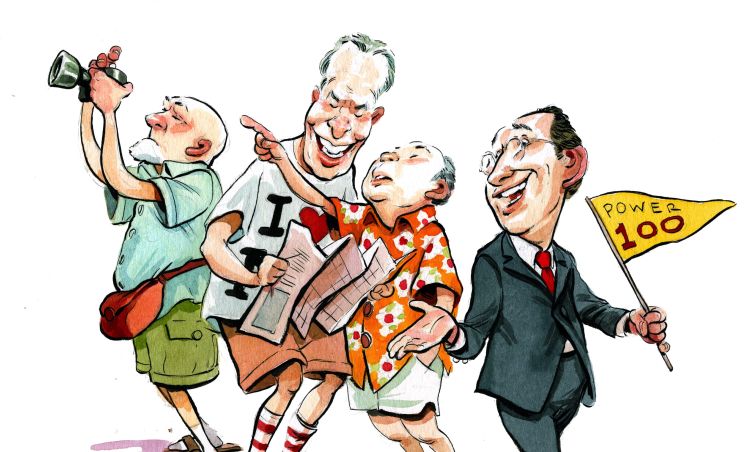 Location is critical. There’s no question about it. Manhattan is only so big—everybody says so.

This wisdom has drawn in a lot of players that traditionally have steered clear of our humble island. A Japanese telecom billionaire (Masayoshi Son) last year made a $3.3 billion purchase of Fortress Investment Group. We felt that was a bold enough move to warrant a place on our list. Sam Zell of Equity International has long been associated with Chicago, but the real estate magnate hasn’t exactly steered clear of Gotham. (The guy owns 10,632 apartments, for god’s sake!) So we made him No. 17. Donald Bren of the Irvine Company is a force of nature on the West Coast, with a net worth of $15.2 billion, according to last year’s Forbes list, but he also owns 97 percent of the MetLife Building. This fact alone makes him sine qua non a player in New York. Welcome to the list, Don.

The flip side of this is that more and more New Yorkers look at the national real estate scene as a whole when making their purchasing, lending and development decisions. This is why the “location” mantra feels a little hollow. (If the whole damn country is an exciting location, then no place is exciting.)

For this reason, we felt that a great real estate investment trust like Forest City Ratner Companies should be represented by MaryAnne Gilmartin (who runs operations in New York) and be joined for the first time by David LaRue who runs the outfit nationally.

Dan Gilbert, who made a fortune with Quicken Loans, has very little to do with New York, but his Bedrock development firm is rebuilding Detroit; what he’s doing has made Motor City a far more attractive place for national real estate players like HFZ Capital Group and Lightstone. We felt that warranted a place on the list.

Florida is a market almost as important to New Yorkers as Queens is—so why shouldn’t Jorge Pérez of Related Group be on the list? He is now.

Naturally, some of the new names are New Yorkers who keep their business strictly within the confines of the city. Ofer Cohen’s TerraCRG has been on a tear in Brooklyn; Cohen earned his place. Gary LaBarbera is the head of the building and construction trades council during a construction boom—naturally he should be on the list. The Port Authority of New York & New Jersey is undertaking billions of dollars worth of transportation and infrastructure projects; it would have been malpractice to leave Pat Foye and John Degnan off the list.

And, of course, we had to add one name out of San Francisco who has been turning things upside down for hoteliers in New York, California and everywhere else: Brian Chesky, the founder of Airbnb. You’re on the list, Brian, but we can’t be held responsible for anything that Barry Sternlicht does to you at Power 100’s gala this summer.