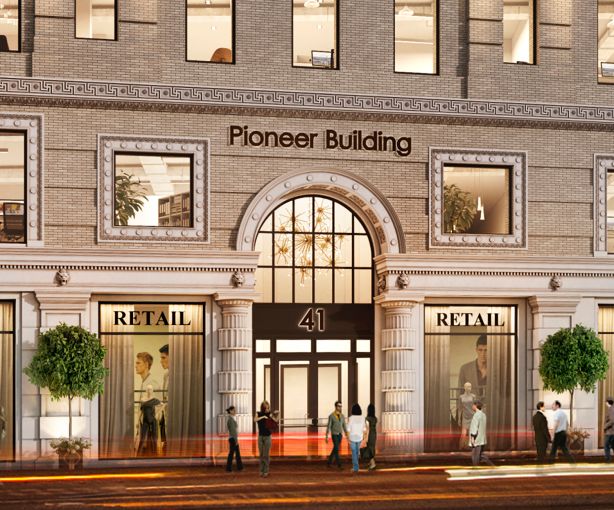 Quinlan Development Group has secured a $132.3 million refinancing of the Pioneer Building at 41 Flatbush Avenue in Downtown Brooklyn, where the developer is finishing an office and retail conversion of the historic former storage facility.

Private equity firm KKR provided the financing, which consists of a $66.3 million senior loan, a $40.5 million building loan and a $25.5 million project loan, according to city property records made public today. The deal closed March 30.

The debt consolidates and replaces previous mortgages on the property. Quinlan and its development partner on 41 Flatbush Avenue, Building and Land Technology, received $80 million in financing on the property from Annaly Capital Management in March 2015. That financing assisted the developers’ $90 million acquisition of the Pioneer Building from Prudential Financial’s PGIM Real Estate and Extra Space Storage that same month.

Quinlan and Building and Land Technology subsequently planned a 261,000-square-foot office and retail conversion of the 10-story property, located between Fulton Street and Lafayette Avenue near the Brooklyn Academy of Music.

The conversion was slated for completion last summer. Cushman & Wakefield, which is handling leasing at the Pioneer Building, did not immediately return a request for comment on the building’s status and availability.

Neither Quinlan nor KKR immediately returned requests for comment.