The Plan: Amenities and Prebuilt Spaces at 114 West 41st Street 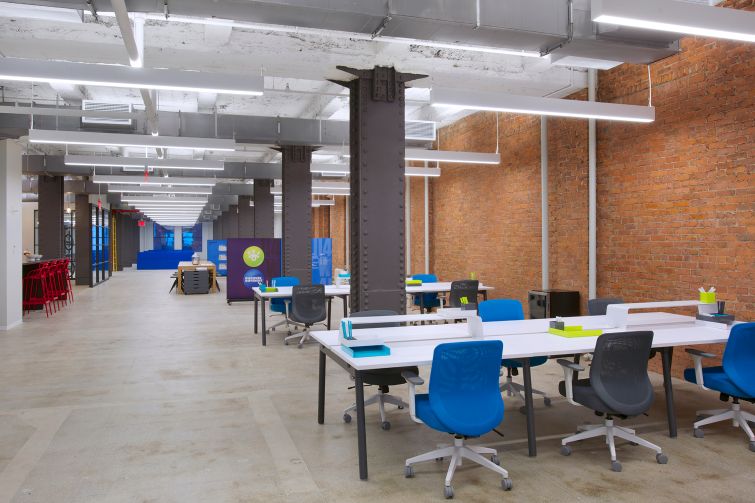 For the renovation of 114 West 41st Street near Bryant Park, landlord Equity Office made a pitch to lure in the creative companies.

What did that entail? Essentially, make lofty spaces that highlight the character of the 22-story, 1915 building between Broadway and Avenue of the Americas and allow for open-plan spaces.

So when Equity Office started constructing prebuilt offices last year, it ripped away the sheetrock to expose the original brick walls. It also polished concrete floors and stripped columns down to steel beams, on which it slapped fireproof paint. And in each unit Equity Office built large kitchens, glassed conference rooms and open areas for workstations using designs by architecture firms MKDA and Gensler.

“Out of the box, that’s what we like to be,” Scott Silverstein, a leasing manager at Equity Office, said about the prebuilts. “The people who wind up here don’t know they want to be here until they see it.”

But these offices weren’t the only ones who got touched by the renovation fairy godmother. During the last 12 months the landlord worked on prebuilts for the fourth, fifth, sixth, eighth, 10th and 11th floors. And the spaces have been popular: Leasing and asset  management platform VTS inked a deal for the whole 11th floor in February 2016; digital media player maker Roku signed a lease for the entire sixth in February 2017; and financial news site Investopedia completed a transaction for the full eighth in April this year. Asking rents for the spaces in the building range from the mid-$70s per square foot to $80s per square foot in spaces at the top of the building.

Since the building is in the middle of the block, many windows are blocked by the adjacent building. So Equity Office took out those windows and filled it in with more red brick.

“The brick gives it a much warmer feeling and a cool New York City edge,” said Wendy Nuñez-Formickella, a studio director at MKDA, who was the senior designer of the project. “The word we used a lot with this project was authentic. We wanted to enhance that. That’s why we left the existing brick wall and chose to match the new brick to it.”

Equity Office acquired the building in December 2014 for $165.7 million from L.H. Charney & Associates, as CO previously reported. Before the prebuilt campaign, the company also renovated both the West 40th and West 41st Street lobbies, which was designed by MdeAS Architects.

Past the lobbies, there is an amenity space that MKDA was responsible for designing. It features a

coffee bar with a barista by coffee providers Truebrew Outfitters, a pool table, bleacher-style seating, a London telephone booth (for private phone calls, of course) and four 65-inch TVs. And the walls are decorated by art sourced by Marshall Okin of Art Etc., a studio and supply store in Sparta, N.J. There are classic New York scenes such as, Marilyn Monroe overlooking Park Avenue, a shot of Will Smith’s in I Am Legend in Grand Central Terminal, or former New York Giants wide receiver David Tyree’s catch to win the Super Bowl in 2008.

“Residential and hotel [asset classes] are blending with office buildings,” Silverstein said. “And while amenities were existing in hotels forever, it’s become a buzzword. It’s not income producing, but there is value in it [in office buildings].”