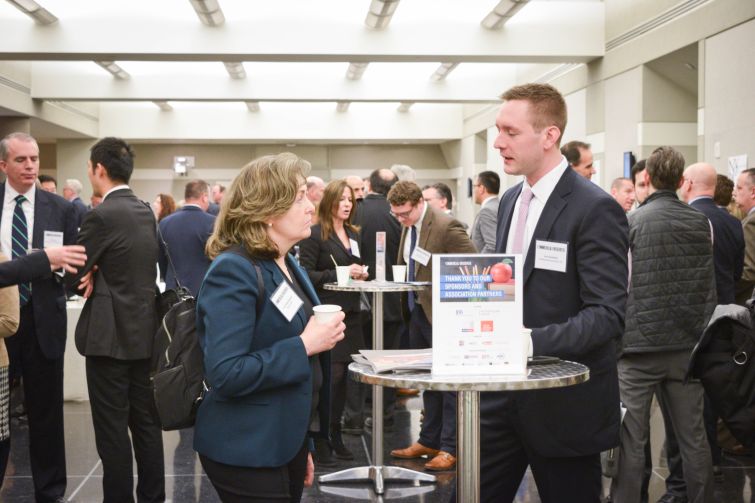 Collaborative workspaces are par for the course in offices in these days, but, apparently, it’s also the case at universities and colleges.

In fact, having more social centers and common space where students can interact is an aspect universities are focused on when designing new buildings or renovations, according to various participants at Commercial Observer’s Development University event on April 5 at the Graduate Center of the City University of New York (CUNY) in Midtown. The event featured speakers from top construction and engineering firms, as well as universities in the New York metropolitan region.

Patrick Burke, the assistant vice president of capital project management for Columbia University, set the tone early on talking about his school’s medical campus expansion in northern Manhattan in his keynote address, including the importance of creating space for students to collaborate.

The first phase of the plan echoes Burke’s call for more common areas for students. Pace is hoping to open more social spaces on the ground floor of the school’s buildings at One Pace Plaza and 41 Park Row.

“We have migrated from a commuter campus to a residential campus over the past 10 years and we don’t have the kind of collaborative modern spaces that our students need,” she said.

In the same panel, Whitney, a vice president and general manager of Turner Construction, talked about the challenges of undertaking Rockefeller University’s $500 million expansion over the FDR Drive. Turner Construction rented space in Keasbey, N.J. to build the steel structure and modular platforms for the building, then massive crane and barges went by way of the East River to deliver the structure. The company received approvals to shut down the FDR Drive for five hours on each of 19 nights during the summer to get the project assembled.

The prefabrication of the structure off-site helped the company achieve many goals, including saving Rockefeller University $20 million, he said.

“Because we built the steel structure in New Jersey, the structure was built at ground level and not in the air, so it was a much safer construction process,” Whitney said. “From a schedule standpoint, we saved over a year of time. If you think about it, while we were digging the foundation in New York, we were building a building in New Jersey.”

However, during the following panel, entitled “Innovations Driving Higher Education Construction: Modern Design and Upgraded Technology,” counterarguments were made for prefabricated structures in campus buildings.

Fordham University’s John Puglisi, an associate vice president of facilities management, disagreed with the construction method in his school’s projects, taking issue with design and layout of modular built rooms and mechanicals.

“The trick there is having talented people making it look like it’s not modular,” Puglisi said. “I remember going to Fordham one day when I first started and somebody said to me ‘This dormitory we design-built in 11 months.’ And I said, ‘It looks like it.’ ”

He added: “We just can’t drop in these cookie-cutter buildings.”

All members of the second panel—which including Puglisi also featured Kate Bicknell of Forest City Ratner Companies, Charles Avolio of Suffolk Construction, Aine Brazil of Thornton Tomasetti and was moderated by Scott Frank of Jaros Baum & Bolles—did agree, however, on the need for virtual design and construction, a process that allows every party in a project.

“If we are building buildings today or in the next five or 10 years the same way we built them 100 years ago or 50 years ago then we are not keeping up with technology and innovation at all,” Avolio said. “It has to focus completely on virtual design and construction. The modeling must start as early as possible with everyone on the team engaged in the model.”

Because universities tend to be long-term owners (and progressive hubs), buildings on campuses are usually the most advanced in terms of sustainability, Brazil said.

“We see there is more innovation with university clients than with some of the developer clients,” Brazil said. “It’s really about energy issues and real sustainability issues with materials [for schools]. I think if we didn’t have the institutions driving us, [sustainability] wouldn’t have made its way into culture.”

But, don’t ask universities to pay for accreditation of its buildings. Fordham’s Puglisi said he’d rather use the money for the US Green Building Council’s’ Leadership in Energy and Environmental Design (or LEED) certification on another project.

agreed with Puglisi and took it a step further during the final panel “Higher Education Development in the Public Sector” which was moderated by David Pfeffer of Tarter Krinsky & Drogin and also included Gerrard Bushell of the Dormitory Authority of the State of New York, Lachlan Squair of the State University of New York Construction Fund and Aaron Aska of New Jersey City University.

“All of our buildings are built to LEED Silver, but we don’t certify because we put that money back into the budget,” Wong said.

While skipping LEED certification is one way of saving money, another way is through public schools making partnership deals with private development companies, otherwise known as a public-private partnership (PPP).

New Jersey City University’s Aska, a vice president for administration and finance, made an argument for more policy changes to promote PPPs so that schools can get the benefits of using private companies expertise and money. He pointed to an example where under now-expired legislation in New Jersey a school made use of PPPs in two projects which ended up completing the development faster than one on campus that wasn’t utilizing a PPP structure.

“The moral of the story is that PPP actually worked in terms of providing capital, in terms of accelerating the project delivery time and bringing private sector innovation to the public sector,” Aska said.