Wells Fargo’s Alan Wiener on the Housing Crisis, Tax Reform and the New Players in Town 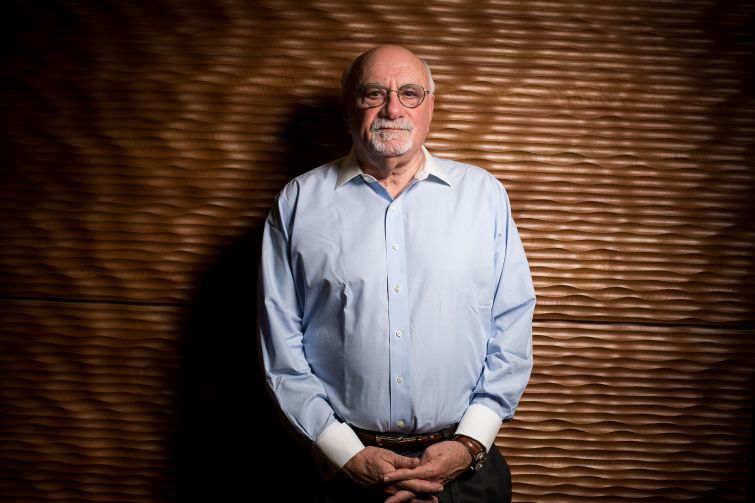 When I sat down with Alan Wiener, the group head of Wells Fargo Multifamily Capital, one of the first things he asked me that afternoon was how much I pay in rent.

The question doesn’t sound impolite, like some might think—not from as friendly a source as Wiener. He sounds like he genuinely wants to know. Probably because questions like rent and affordability are foremost in his mind.

High rent is a widespread problem for many in the Big Apple. According to StreetEasy, New Yorkers were expected to pay up to two-thirds of their income on rent in 2016. While Gov. Andrew Cuomo and Mayor Bill de Blasio have both acknowledged the city’s housing crisis, the 421a tax abatement—which rental developers say is necessary to build housing—has lapsed for more than a year now and is still awaiting revival by the state.

And Alan Wiener seems to actually be doing something about this.

Wiener’s team did a whopping $15 billion in financing nationwide of conventional, affordable and senior housing in 2016. And over the years, his group has lent on some of the biggest multifamily deals in the country—like the $2.7 billion Fannie Mae-secured loan it provided to Blackstone Group and Ivanhoe Cambridge for its purchase of Stuyvesant Town-Peter Cooper Village on Manhattan’s East Side in 2015, or the $531 million Freddie Mac mortgage it originated to refinance Starrett City in Brooklyn in 2009. Together, those two deals went toward the preservation of more than 10,000 affordable units across New York City. And over the last five years, Wells Fargo as a whole has invested $9 billion in low income housing tax credits and financed more than 180,000 affordable units across the country. Since 2014, the San Francisco-based banking giant has originated $9.6 billion for the construction, bridge and permanent financing of affordable multifamily properties.

Wiener—who preceded his banking experience as the New York director for the Department of Housing and Urban Development—talked that day about the current housing crisis in the city, what caused it and what might make it worse.

Commercial Observer: In the State of the City address last month, Mayor Bill de Blasio re-emphasized his commitment to create more affordable housing in and said the city would put $1.9 billion toward the cause. What do you make of that?

Wiener: I think that there’s an enormous need for what he’s doing, and the city has committed a lot of money. The problem is that the need is probably five times what they’re producing, although New York is one of the most active cities in the country in terms of affordable housing. I can’t criticize the mayor at all for that. It’s just that the need in New York and the need around the country is staggering because so many people are paying an enormous amount of their income.

How much is too much?

The standard guideline is you should pay about 30 percent of your gross income for housing. The problem is when you’re in high -cost areas like New York or other large cities, incomes aren’t going up, and you’re putting 50 percent of your income toward housing, you don’t have a lot of disposable income. Generally, you’re living in substandard housing and paying an enormous amount for it. That, in New York, is the same not only for low-income people and seniors but for moderate-income people. New York is a tough place for moderate-income people to find affordable housing.

What are some of the factors contributing to this shortage?

It’s the high cost of land, construction and real estate taxes. All those contribute to housing becoming very expensive.

Before it expired on Jan. 15, 2016, the real estate industry relied on the 421a tax abatement to make housing projects feasible. Do you think that’s the only way?

There are advocates who say that you don’t need 421a, that it’s a giveaway to the real estate industry.

Do you believe that?

No, I don’t at all. But I’ve only been doing this for 40 years, so I may not have as much knowledge as the advocates do. And since [Wells Fargo] finances billions of dollars in housing, I will tell you that New York real estate taxes on multifamily are probably double the next largest cities.

How much of those are real estate taxes?

On a fully stabilized building, probably more than 30 percent of [a property’s] gross income.

What do you think of the newly proposed 421a?

It’s not a huge change from what we negotiated two-and-a-half years ago with the city. The only real change in 421a is if you’re doing more than 300 units in certain geographical areas, like Manhattan and Brooklyn and Queens, you have to use prevailing wage. That was the price of admission, to get back into having a 421a. So I think we’re done with that. You’d have to talk to the governor and his people, but I think that the intent is to make it part of the budget submission.

What about the third-party monitor?

With the contractors, there’s a mechanism for monitoring it after the fact. From a lender’s perspective, like we are, we’re not going to lend if they can come and for instance, if you haven’t complied with [the prevailing wage requirement], remove the 421a. You won’t know until afterward, [and according to] what’s in the legislation, there will be enforcement of it. But the enforcement will not include removing the tax abatement. It’ll just be going after the people who didn’t pay the prevailing wages.

It’s been more than 13 months since 421a expired. Has that created a lag in buildings that need to be built?

Several things are happening. One thing that’s happening is with the condominium market. There’s virtually no new condos starting and sales at the upper end have fallen off. And there are no new rentals starting either, so it’s a perfect storm [for housing in New York City]. Now, the condos have nothing to do with the 421a. The condos just have to do with the condo cycle. And obviously you can’t do a new rental without 421a because the taxes are so expensive.

I think a lot of the [rental buildings] being built now are what was grandfathered under the old 421a. There’s nothing new. Nobody would buy land or take the steps to produce rental housing because you can’t without 421a. Hopefully land prices will go down. We’ll see. But I think there’ll be a big hiatus. We’re not going to see many rental housing starts in the last half of 2017 or in 2018.

How will that affect your lending business?

It affects the construction lending business for sure, so there’s almost nothing in the pipeline in terms of new rental housing or new condos. There will be enormous lag time. It’s almost counterproductive. If the point was to do 421a and get prevailing wage so you could help “union workers,” the 13 months has done the opposite. So go figure.

How much will that hurt people who need housing?

Depends who you’re talking about. In order to make a new 80/20 where the rents work on the unaffordable side, you can’t afford that. So you’re talking about double what you’re paying for a one-bedroom. So who does that really affect? That’s why millennials double up in those. The affordable housing in those is for people earning 50 percent area median income or below. So you have this enormous swath of people who are above 50 percent but below 150 percent or 200 percent who can’t find affordable housing in the city—and affordable meaning workforce housing and low- and middle-income housing. I like to talk about when they did 1,000 units at Hunters Point. They had 90,000 applications for apartments. What does that tell you? The mayor has done a really good job and is very committed to try to do as much affordable housing as possible. The problem is, if the city is committing $1.9 billion, which is very generous, the need is [much greater].

If Mayor Bill de Blasio isn’t re-elected in 2017, how important is it for a new mayor to focus on building more housing?

I thought that Ed Koch had a huge commitment to affordable housing. And David Dinkins did. To a lesser extent Giuliani did. To a much greater extent Bloomberg did, and now de Blasio does. I can’t see any mayor not being committed to it because it’s so desperately needed.

What do you make of Maria Torres-Springer, Vicki Been’s replacement, as the head of the Department of Housing and Preservation?

Vicki went back to teaching. Did her three-plus years. Maria is learning. She comes from New York City Economic Development Corporation. She’s very smart—she comes from government. There are [good] people around her, and she’s repeatedly a good manager, so I hope she’ll do well.

Is there anything that should be her top priority when it comes to preserving and creating affordable units?

It’s just about spending the money and being efficient about it. Part of why housing is so expensive here is that getting through the process can be very difficult. Whether it’s the Department of Transportation, or ConEd, or zoning, it takes way, way, way too long. Or the process at HPD. But they’re in control of that. They can change that. Time is money. The more it lags, the more costly housing is going to be. There’s a pretty robust pipeline for [fully] affordable housing, non-80/20s, that didn’t really stop. The only ones that stopped were the mixed-income, so hopefully 421a comes back.

What are some of the deals you’ve been working on?

We did all the buildings at Essex Crossing [on the Lower East Side] so far. We closed Greenpoint Landing in Brooklyn.

We closed [an $80.4 million construction loan and a $67 million investment in low income housing tax credits for] St. Barnabas in the Bronx, which is a really interesting deal. It has 314 affordable units [a medical care facility, a retail space, a parking garage and a day care center].

How much capital did your group commit in 2016?

And what types of loans does that comprise?

Permanent financing on conventional and affordable, and conventional includes seniors and manufactured housing and student housing.

How do you feel about Ben Carson, the nominee for U.S. Secretary of Housing and Urban Development?

How do you feel? I think clearly he’s an intelligent person, without any experience. I hope that he has the ability to hire experienced staff. That’s what I’m going to say about it.

What else worries you in the year ahead?

When the state is releasing the subsidy money. The governor had committed to provide subsidy for affordable housing almost a year and a half ago.

There’s a good chance that rates go up, so that’s going to hurt things. If rates go up, that has the same impact on affordable housing. If you have to pay more in debt service [at the same time tax credit equity is going down], both could have a negative impact on the number of units because you then need more subsidy for each unit.

It doesn’t sound too good out there.

It’s not. And we haven’t even talked about Russia.