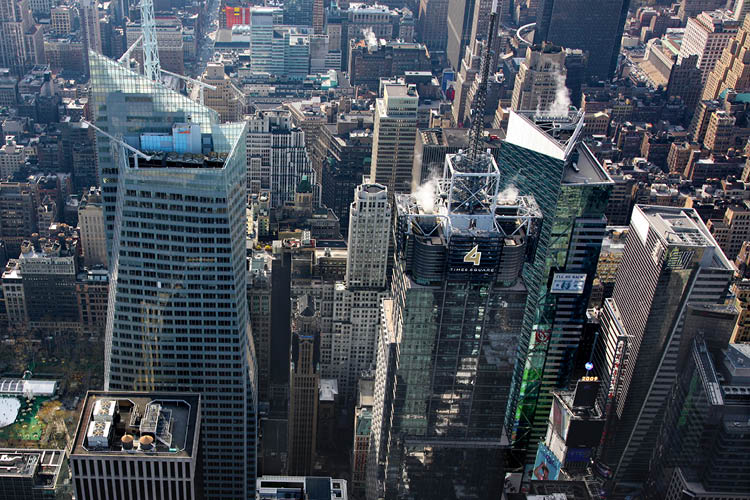 Office tenants seeking large blocks of space are abandoning Midtown for trendier neighborhoods and newer buildings, driving up vacancy rates at some of the city’s biggest office towers.

Law firms, which have had large offices, have been downsizing since the recession, while tech, advertising, media and information services (TAMI) firms are continuing to flee Midtown and Midtown South, accounting for nearly 50 percent of inbound tenants in the Meatpacking District, Greenwich Village and the new high-rises at Hudson Yards on the Far West Side of Manhattan, according to new research that JLL provided to Commercial Observer.

And the vacancy rates show it: In Midtown, office space for rent increased to 8.8 percent at the end of 2016 from 7 percent the year prior, JLL data indicate. Conversely, vacancy rates Downtown slid to 9.3 percent as of last month from 12 percent in 2015. As of this February, nearly 1 million square feet of big blocks of office space became available in Midtown in buildings such as 601 Lexington Avenue, 360 Madison Avenue and 1400 Broadway, according to CBRE data.

Some of the largest chunks of empty space in Midtown are a result of companies moving to the Far West Side. Ninety percent of new office tenants at Hudson Yards have relocated from Midtown, JLL’s report shows. Tenants including L’Oreal, Boston Consulting Group, Coach and VaynerMedia have already moved into the nine-month-old, 1.7-million-square-foot tower at 10 Hudson Yards. A handful of high-profile tenants with current Midtown digs have also preleased space at Brookfield Property Partners’ neighboring 1 Manhattan West, which is under construction. Major corporate law firm Skadden, Arps, Slate, Meagher & Flom will leave 16 floors in 4 Times Square for a 550,000-square-foot space in the 67-story, 2.1-million-square-foot tower. The National Hockey League has also signed on for 150,000 square feet across five floors of the building, which will be complete in 2019. It’ll move out of a 140,000-square-foot space at SL Green Realty Corp.’s 1185 Avenue of the Americas between West 46th and West 47th Streets.

Part of the draw comes down to numbers. Not only do the Downtown neighborhoods cater to a hipper crowd and offer shorter commutes for Brooklynites, but office space there is also cheaper. The average asking rent for Class A office space Downtown reached about $62 per square foot last month, $23 less than the $85 asking rent in Midtown, Cushman & Wakefield data indicate. The Far West Side asks a pretty penny, though: 10 Hudson Yards is looking for $95 per square foot and 450 West 33rd Street is seeking $89, according to the brokerage. However, the caliber of tenants tends toward financial services and more established companies.

The Downtown office market, which in JLL’s report stretches from Canal Street to the Financial District, has seen eight new office leases of more than 50,000 square feet signed in the first quarter of 2017, up from just one such lease in the same period last year, JLL data show. Meanwhile, nine large tenants have inked deals for similar amounts of space in Midtown during the first couple of months of the year, down from 11 leases in the first quarter of last year.

Though hedge funds have been closing at rates not seen since the recession, they’re not to blame for the slowdown of office leasing in the submarket. In fact, the shrinkage of major law firms has lessened demand, said Tristan Ashby, JLL’s director of New York research.

Legal services companies are some of the largest tenants in Midtown, with leases of 100,000 square feet or more in Class A office buildings. But big firms have been contracting since the recession, as Commercial Observer first reported in 2014.

“Legal services is really in a depression in terms of occupancy,” Ashby said. “They’re both hiring less people and taking less space.”

Hedge funds also simply lease much smaller spaces than law firms, typically 5,000 square feet or less. Traditionally, “a law firm will take like five floors in a building, and one floor could be like 10 hedge funds,” Ashby said.

Arthur Mirante, a principal and the tri-state president of Avison Young, told CO that as a result of tenant migration and downsizing, Midtown landlords are now paying the piper. “I do think the vacancies are going to increase in Midtown and move further in favor of tenants,” he said. “But there’s still a very healthy demand for space in Midtown Manhattan.”

Indeed, landlords have been upgrading their several-decade-old buildings and adding amenities (think roof decks and bike racks), as CO has previously reported, and offering concessions to new tenants, like tenant improvement dollars and free rent.

“Concessions are at historical highs,” noted Ashby, who also said the commercial brokerage has been tracking rent concessions for the past decade. “I think it’s a good thing for the market, for Midtown and Downtown landlords to compete with the newer product.”