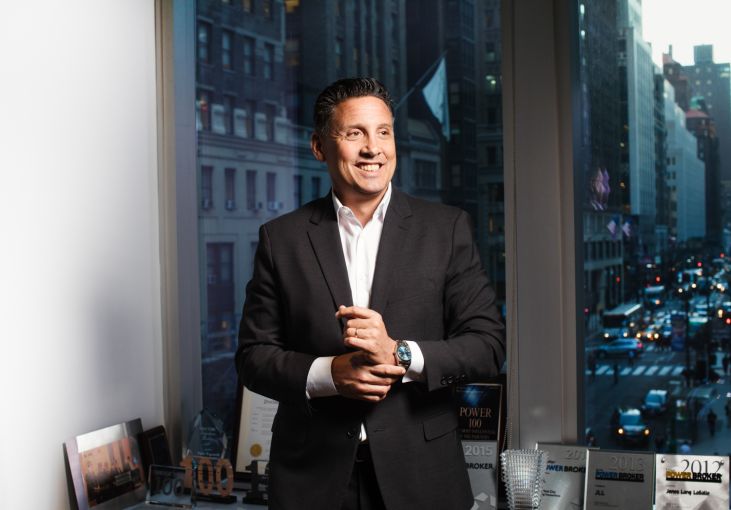 It’s not every day that Gov. Andrew Cuomo holds a press conference to announce a lease, but in the middle of February, New York’s top elected official did just that.

He ended months of speculation about whether music streaming service Spotify would be relocating to 1 World Trade Center or 4 World Trade Center. The decision: 378,00 square feet at Silverstein Properties’ 4 WTC. And the deal included an $11 million rent reduction over the 15-year term of the lease.

The deal marks the largest space Silverstein signed with a private corporation at the 72-story tower and underscores Lower Manhattan’s appeal to technology, advertising, media and information, or TAMI, tenants.

“This major commitment by a pioneer of the digital economy is further proof that Lower Manhattan has become the top destination for New York’s most innovative companies,” Silverstein Chairman Larry Silverstein said in prepared remarks after the announcement.

One of the many people who worked on the deal was Alexander Chudnoff of JLL, a vice chairman in the New York office who was extremely tight-lipped before the deal was announced—but when Commercial Observer met with him recently, the deal was sealed so he didn’t need to be so guarded. On this transaction Chudnoff, 46, didn’t work with his usual team of Mitchell Konsker, Paul Glickman and Matthew Astrachan. (On each assignment, JLL puts “the best team on the field every time,” Chudnoff said.)

Chudnoff and his team, along with A. Mitti Liebersohn (who went to Avison Young in April 2015) have been at JLL since departing Cushman & Wakefield in 2011.

CO met with Chudnoff, who grew up in New York City (in Manhattan he lived at 205 Third Avenue between East 18th and East 19th Streets) and Demarest, N.J., in one of the conference rooms at JLL. Before the interview, the Upper East Side married father of two mentioned that he once went on a date with Dylan Lauren, the daughter of fashion designer Ralph Lauren and owner of Dylan’s Candy Bar, who is one of his wife’s friends. They were in their 20s, and Lauren “felt like a sister.” Lauren’s mother’s assistant hooked the pair up when the date between the assistant and Chudnoff didn’t work out.

It wasn’t, however, through these connections that he met his wife. Her he met in 1997 walking across Park Avenue. “I saw a beautiful girl walking across the street,” Chudnoff said, “and I followed her into a restaurant [the now-shuttered Paper Moon Milano].”

It has been a lovely partnership—but the word “partnership” seems to come easily to Chudnoff.

Commercial Observer: For how long have you worked with your team?

Chudnoff: We have worked together at some level, in my case 20 years, in which 14 of those years were at Cushman & Wakefield. We are partners. We are brothers in arms. But we all do something different.

What are your specialties?

And what was Mitti’s niche?

Mitti was a relationship manager and more international and national business, which was a platform that was well met here and I don’t know if—how do I say this politically correctly?—I don’t know if Mitti found the right place for him to be. He wanted to be more on a managerial level. He wanted to work with young people coming into the business and spend his time being more of an influence to them than on the broker side of the business.

How did you have the opportunity to work on Spotify?

I’ve done a lot of large transactional work of substance like half a million square feet. I represent a lot of technology companies. And when I say technology companies I mean more that are the basis of the figurehead companies right? So, like Uber is a very important client of ours. I’ve represented them for years. Spotify is the Uber of the music industry, right? Also, [a couple of the JLL brokers who represented Spotify] Ken [Siegel,] Peter [Riguardi] and myself specifically have worked together on Sotheby’s, so we’ve had a real history together of working well.

Would you say that Spotify is your most high-profile deal to date?

No. We did almost 1.1 million square feet of leases with [Empire State Realty Trust head] Tony Malkin over a very short horizon of time for Li & Fung in three different buildings [including the Empire State Building]. I think Spotify is great because it’s obviously for the World Trade Center a really important and powerful statement for New York and Lower Manhattan. I’ve also had a long-standing, both personal and professional, relationship with [Marty Burger,] the CEO of Silverstein Properties.

What was the whole 1 WTC-4 WTC back-and-forth about? Was it a strategy to negotiate better rents?

I think actually 1 [WTC] was very well contemplated. There were physical issues, a sky lobby is not for everybody, but you know in the end, there were opinions made about how the floor plan layouts were a little different and a little more effective for what Spotify needed. I think having a block at the top of the house was really special for them. It’s a Scandinavian company, and in the end they live differently than most of the other technology companies in New York live.

Most tech companies in New York City are thinking pre-war, almost industrial-type buildings whereas if you look at how they live today in Stockholm—you know, glass modern buildings—I think they had a lot of interest in that. I think that the ownership and the tenant really saw eye to eye and that really was an important factor. And they loved having Eataly in the building.

What impact do think the Spotify deal will have on Lower Manhattan?

I think what Spotify did and will continue to do is validate Lower Manhattan as the real up-and-coming tech center in some regards of New York City. It’s helped validate, in the same way that you know Google validates the Meatpacking District, and Facebook validates the East Village. Certain companies are so important to the area themselves that people move into those areas to be kind of in touching distance of those tenants. So we think that [Spotify is] going to help create even more positive energy and traction of the leasing up of Lower Manhattan.

The sense I have is that Tribeca is expanding I think every day closer and closer to the fringe of, let’s call it the trade center site itself. Look at what Brookfield [Property Partners] has done to energize the West Side of Manhattan and kind of the nightlife around it as well. Every day a new restaurant opens. Residential, tourism, trendy hotels, trendy restaurants, everything is coming into that neighborhood. It’s the evolution, and what’s happening there is fantastic. And I do really think—I mean we all joke about this—but I think Spotify really will hip-ify the area. It will give it a little more credibility of being a really cool place to be.

I think Lower Manhattan is becoming an extension of Midtown South. Does that make sense? I think it’s become the type of place where it affords more optionality for tenants that might have only boxed themselves into a very small arena. It really opens up options and the community is extending itself. But this is not unusual for Manhattan proper. You know, years ago the client would say, “I want to go look in this immediate area,” and in the end we’d look at 1,000 other locations. New York has become really a market unto itself where the submarkets have become less important.