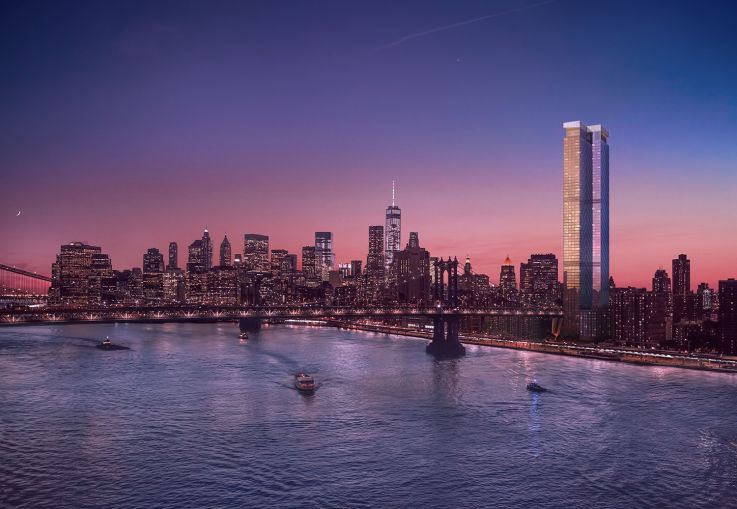 Few developers this decade have shown a desire to reshape the Manhattan skyline like Gary Barnett. The Extell Development Company chief virtually invented Billionaires’ Row with his One57 condominium tower at 157 West 57th Street—which set the template for the ultra-luxury, supertall residential skyscrapers that subsequently popped up throughout Midtown—and is currently at work on an even larger project, the 1,550-foot-tall Central Park Tower at 217 West 57th Street. (It should be noted that Barnett rolled the dice on One57 when the economy was still convulsing, and there was no guarantee he’d strike gold.)

But Barnett is now looking to work his magic farther downtown with a development that, in some respects, represents one of his biggest gambles yet: One Manhattan Square, an 815-unit condo building rising at 252 South Street, right next to the Manhattan Bridge and across from the FDR Drive, in the neighborhood known as Two Bridges. Despite the fact that One Manhattan Square is a project of unprecedented scale and ambition for the sparsely developed waterfront area, once again companies like JDS Development Group and Starrett Corporation are borrowing from Extell’s playbook with plans for high-rise apartments of their own in the neighborhood.

Yet it remains to be seen exactly how the developer’s latest endeavor pans out. In response to headwinds in the luxury Manhattan condo space that have discouraged developers from further investing in the high-priced projects that characterized the market in recent years, Barnett conceived One Manhattan Square as catering to “midmarket” buyers, with prices for one-bedroom apartments starting at $1.2 million and most of the units ranging up to $3 million.

Extell launched sales for the building to the general public this past November but not before pursuing a notably unorthodox strategy: exclusively marketing the property to Asian buyers one year before putting the apartments up for sale domestically. The tactic appears to have reaped some initial rewards. Extell announced in early March that it had sold more than 100 units, or nearly an eighth of the apartments at One Manhattan Square, in the four months since the sales launch—including a five-bedroom, $13 million duplex penthouse.

Raizy Haas, Extell’s senior vice president of development, described the building’s price point as “very competitive compared to other Downtown [condo] projects,” citing how buyers benefit from a 20-year tax abatement at One Manhattan Square that makes carrying costs at the property “the lowest in the city.” (One-bedroom units at Witkoff and Fisher Brothers’ 111 Murray Street in Tribeca, for comparison, started at $2 million.)

The Asian buyers that Extell initially marketed the building to, Haas told Commercial Observer, “are interested in diversification and are focused on stable, liquid, safe real estate markets, especially New York City…They are comfortable with and trust our reputation, and so it made sense to introduce One Manhattan Square [to them] given the price point, unit mix, amenities, waterfront views and low carrying costs.”

Though Extell only recently launched sales at the tower, the project’s sheer size and particular location has some observers wondering how long a potential sellout could take—especially given how other Manhattan condo developers, like Ben Shaoul’s Magnum Real Estate Group and Ziel Feldman’s HFZ Capital Group, have taken the hint and similarly positioned their own projects at the midmarket, $10-million-and-under price point.

“What’s attracted the most attention [to One Manhattan Square] is the unusual location for the project and its sheer size,” said Jonathan Miller, the president and chief executive officer of real estate appraisal firm Miller Samuel. “I think selling 100 units is a positive stat for [Extell], though I think sales will be viewed in terms of years, not quarters.

Miller added that the project “is coming in at a price point that hasn’t been set for this location, but that’s been the pattern with new development throughout this cycle—new product comes into the neighborhood and redefines value expectations for the market.”

Leonard Steinberg, the president of residential brokerage Compass, said one of the building’s challenges is that some condo buyers looking for a Lower Manhattan apartment “will have an objection to going this far east [to Two Bridges], and this is as far east as you can go Downtown.”

He said, however, that views overlooking the East River and over 100,000 square feet of amenities—including multiple swimming pools, a bowling alley, a cinema, a spa centered around a courtyard and a “relaxation garden”—differentiate the building from Downtown competitors.

“I think there’s been a tremendous undersupply of attainable, quality apartments [in Manhattan], and developers certainly saw that need,” said Steinberg, who has no involvement with One Manhattan Square. “[Extell] literally want to create a neighborhood within the building, and I hear a lot of investors are very attracted to the fact that it has the [tax] abatement.”

The concern, Steinberg added, is whether One Manhattan Square “will have a big enough audience,” citing a likely “two- to three-year minimum” timeline for a sellout. “You look at those prices and you think, ‘Everyone has a million dollars,’ ” he said, referring to the starting prices at the building. “We get very skewed in Manhattan real estate.”

Haas dispelled concerns about Extell’s ability to move the inventory at One Manhattan Square, noting that the developer “has successfully sold out large-scale projects such as The Orion,” the 551-unit condo tower it built at 350 West 42nd Street. Regardless of any potential challenges in selling out the building, Extell has “no current plans to offer units at One Manhattan Square as rentals,” she said.

Extell even raised prices on certain units at the property recently, with Haas describing the slight price hikes—such as a recent $90,000 increase on a $1.9 million one-bedroom—as “tell[ing] the market we are confident in our product and that we are selling well and selling fast.”

But Extell’s ability to sell its units at One Manhattan Square would appear particularly important given the lengths to which the developer had to go in order to finance the $1.4 billion project. Extell received more than $463 million in mezzanine lending from Scott Rechler’s RXR Realty—a financing package that was delayed amid concerns about Extell’s ability to secure senior lending—to fund the tower and two other projects, while also raising EB-5 funds and sealing a $600 million senior construction loan from a consortium led by Deutsche Bank.

“Lenders today are more selective when choosing to finance condo projects, especially large-scale developments such as One Manhattan Square,” Haas said. But she said Extell was able to structure “financing that was conservative and received the support of several banks that have been lenders on past projects,” while also noting that RXR is also a financing partner on “three [Extell] projects,” including One Manhattan Square. RXR did not immediately return a request for comment.

Only time will tell whether Barnett’s latest project will have been worth the hoops the developer had to jump through to bring it to fruition. Miller noted that Extell would likely have to rely on investors to buy up “a large swath” of the units at One Manhattan Square, rather than buyers purchasing to live in the building themselves.

But that would presumably suit Extell fine, as long as the building is able to deliver the necessary returns to Barnett and his financial backers. “Developers are going to build in this market whatever is economically viable, and if the market shifts, they shift,” Miller said. “Builders build until they can’t build anymore.”