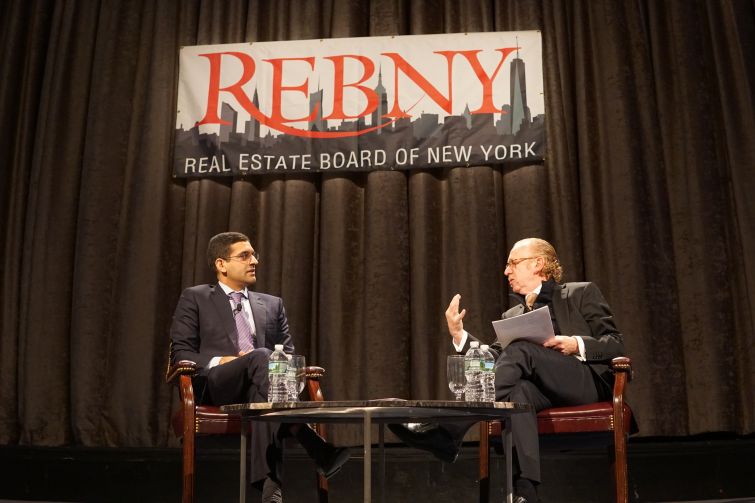 Blackstone Group continues to be “long-term believers” in New York City property markets, in particular offices and Class B apartments, despite concerns about other asset classes and the possibility of a high-interest rate, low-growth environment in the near future, according to Nadeem Meghji, a senior managing director at the alternative investment giant and head of its Americas real estate division.

Meghji spoke Wednesday afternoon at the Real Estate Board of New York’s Members’ Luncheon at the New York Hilton Midtown, where he sat down for an interview with James Kuhn, president of Newmark Grubb Knight Frank.

The conversation touched on Blackstone’s investment profile in the real estate market nationally, though Meghji also discussed the firm’s myriad plays in the New York market in recent years and its view of the local market moving forward.

He said Blackstone is particularly bullish on “Class B apartments in New York City,” citing its record $5.3 billion acquisition of Stuyvesant Town-Peter Cooper Village in 2015 as an investment in residential properties that “charge rents at $50 to $60 per square foot” rather than the new development space, where rents frequent $100 per square foot.

The Stuyvesant Town purchase, Meghji added, is viewed as a long-term hold for Blackstone, which sought what he termed a “win-win-win” deal that would satisfy the City of New York as well as the complex’s residents. “The hardest thing for us was to earn the trust of the tenants,” he said, citing the firm’s desire to listen to community concerns via surveys and focus groups.

Meghji noted that though the Stuyvesant Town deal came with extensive air rights—valued at a reported $625 million—Blackstone “agreed not to use [those air rights] on site” and to not build on open spaces at the complex. He added that the City agreed to assist the firm with an air rights transfer in the future, though Blackstone is currently planning “no action” on such an air rights deal.

The Blackstone executive also expressed optimism about the city’s office sector (he described the company’s $750 million acquisition of Park Avenue Tower at 65 East 55th Street in 2014 as predicated on the thesis that “Park Avenue isn’t going anywhere”) but was less optimistic on the hotel sector (given an influx of inventory and declining cash flows), luxury condos (“We’re cautious”) and prime retail (“High street retail went too far, too fast”). Meghji added, however, that, “As a basic theme, New York City is a place where we’re going to invest.”

When asked by Kuhn what keeps him up at night, Meghji was not particularly downcast on the future of the economy. However, he cited a low unemployment rate that may place a ceiling on growth and the likelihood of economic stimulus that would lead to higher interest rates. “If you end up in an environment with higher interest rates and inflation but lower growth,” he said, economic stagnation is a possibility.

Nationally, Meghji said Blackstone’s $1.3 billion acquisition of the Willis Tower in Chicago in 2015 was viewed as “an opportunity to control an iconic office building” with underutilized retail potential and 1.7 million annual visitors to its observatory—calling it the “perfect ‘buy it, fix it’ asset.”

Blackstone’s $1.7 billion purchase of The Cosmopolitan of Las Vegas hotel and casino, meanwhile, was “about buying the right piece of real estate” on what he termed “the 50-yard line of the [Las Vegas] Strip,” he said. Meghji noted that Blackstone has “basically doubled EBITDA [earnings before interest, tax, depreciation and amortization] [on the asset] since we did the transaction” in 2014, while also citing the firm’s belief and investment in select service hotel chains like Motel 6 and La Quinta Inns & Suites.

The luncheon also saw REBNY president John Banks briefly discuss issues like the Midtown East rezoning, which received a “no” vote from Community Board 6 last week and which he described as crucial to spurring new development and public infrastructure improvements in the neighborhood.

Banks also said REBNY had written to the New York State Department of State regarding StreetEasy’s controversial “Premier Agent” feature, which residential market participants have criticized as a pay-to-play scheme; Banks cited “serious reservations as to the way the program is structured” and said REBNY would further consult with the State on the matter.

REBNY also announced the winner of its 2016 Most Promising Commercial Salesperson of the Year Award, Hayley Shoener of JLL.