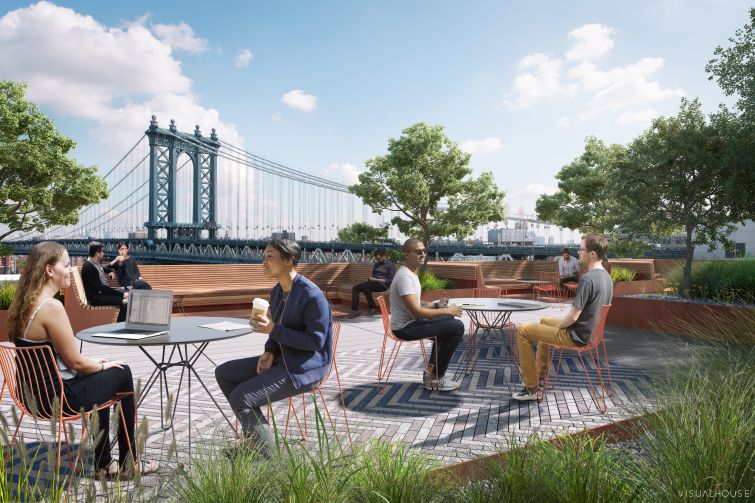 45 Main Street rooftop, which was designed by James Corner Field Operations, the firm that designed the High Line. It was a major point of attraction for BIG.

Bjarke Ingels will soon be able to walk from his Brooklyn home to his New York City offices.

The Danish starrchitect’s firm, Bjarke Ingels Group (BIG), has signed a 50,000-square-foot lease at Two Trees Management Company’s 45 Main Street in the Dumbo section of Brooklyn, the landlord announced today. It will be just a stone’s throw from Ingels’ approximately $4 million, three-bedroom penthouse at 205 Water Street between Bridge and Jay Streets in the neighborhood.

BIG expects to occupy the entire ninth floor of the 12-story building between Front and Water Streets starting in the fall. The asking rent in the 10-year deal was not immediately clear.

Two Trees’ Dan Conlon and Mark Jackson managed the transaction in-house, while BIG was represented by CBRE’s Mary Ann Tighe, Chris Mansfield, Peter Gamber, Ken Rapp and Tim Dempsey. The brokers did not immediately return a request for comment via a spokeswoman.

“There is a movement among the world’s top media, creative and design leaders and it’s centered right here in Dumbo,” Jed Walentas, a principal at Two Trees, said in a statement. “Our focus has been to position our buildings for creative firms—large and small—by modernizing infrastructure and providing first-rate amenities in a unique community defined by its independent local businesses.”

Part of the major reason why Ingels chose to move his Manhattan offices, which are currently in 22,327 square feet in 61 Broadway between Rector Street and Exchange Alley, is because he and many of his employees live nearby.

Indeed, about three-quarters of the nearly 200 workers at BIG’s Manhattan offices live in Brooklyn, according to The Wall Street Journal, which first reported news of the deal. Also, Dumbo reminds him of Copenhagen, where his company is based.

“With the majority of my colleagues, myself included, living in Brooklyn and the continuous enhancement of the neighborhood through the expansion of Brooklyn Bridge Park and the Two Trees community, Dumbo is an obvious choice for BIG in New York City,” Bjarke Ingels, the founding partner of BIG, said in a prepared statement. “The visual excitement and physical proximity to Downtown Manhattan combined with Dumbo’s artistic spirit and access to public space feels like our native Copenhagen, making it as Scandi-merican as any place I can think of.”

At 45 Main Street, BIG will join many other design and media companies, including HUGE, Big Spaceship, Hudson Union, The Joey Company and Mammoth Advertising.