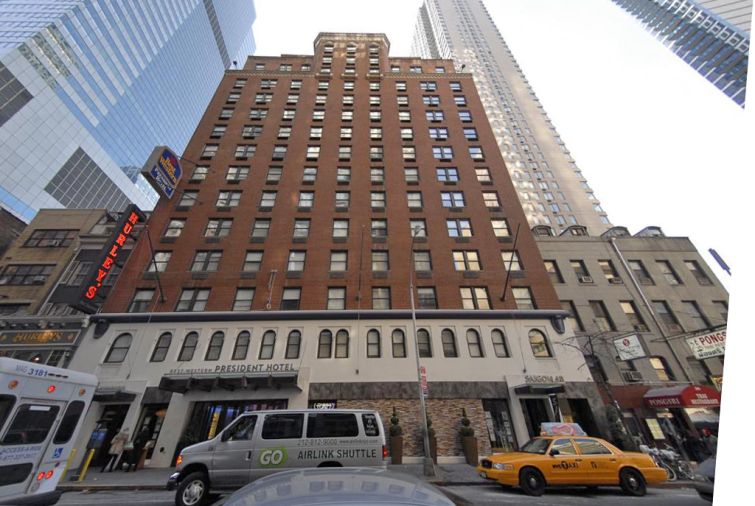 A $70 million loan collateralized by the Gallivant Times Square at 234 West 48th Street is being dual-tracked in foreclosure, according to a source familiar with the asset and confirmed by data from Trepp.

The 209,581-square-foot property, located between Broadway and Eighth Avenue, has been through several reincarnations. Up until June 2016, it was known as TRYP New York Times Square by Wyndham but is listed as the Best Western President in Trepp’s database.

The loan was originated in July 2006 with an original balance of $80 million and comprises 23 percent of the remaining collateral in the Credit Suisse-sponsored CSMC 2006-C5 commercial mortgage-backed securities transaction.

The loan was not paid off on its maturity date in August last year, and special servicer LNR Partners is currently dual-tracking foreclosure proceedings and potential restructuring options with the borrower, an affiliate of Investcorp International Realty, according to servicing commentary.

Investcorp bought the hotel from BW President NYC, an affiliate of Hampshire Hotels and Resorts, in 2009, paying $142 million, according to city records, and assumed the $80 million loan on the property at the time of acquisition.

The loan was previously modified in October 2014. Investcorp paid down the first mortgage by $7.5 million and also paid off the $15 million mezzanine loan, made by Column Financial, in full. Per the modification agreement, the borrower has the option to extend the maturity date until August 2017 or August 2018 if certain requirements within the previous loan modification agreement are met, said the source.