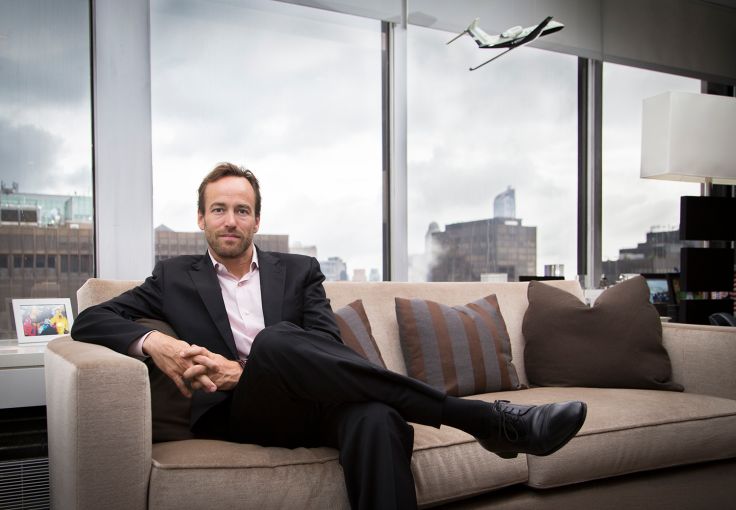 Over the last four years, Fisher Brothers has been able to carve out a niche in the mezzanine financing market. That opportunity exists because larger financial institutions and big banks don’t often put out loans less than $30 million for transitional properties, according to Winston Fisher. He sat with Commercial Observer in the family-run firm’s 299 Park Avenue offices in early February and provided some color on recent deals, a big new hire and running marathons.

Commercial Observer: You just got back from the World Marathon Challenge. Tell us about that.

Fisher: I just got back last Tuesday. It was seven marathons in seven days on seven continents.

So how do you feel after running 26.2 plus miles every day for a week?

You have a lot of different emotions, but [overall] it was deeply satisfying. I did it for charity, for the Fallen Heroes Fund. I try to do all my races for charity. I like to do something for more than just myself, and it’s a great way to build awareness. In 2016 [including this race], we raised almost $600,000 for Fallen Heroes Fund.

When’s the next race?

I’m doing a seven-day race through the Gobi Desert in June. It’s a stage race, so you have to carry all of your own food and everything, except you’re given water and tents at night to sleep in. I’m going to do the North Pole Marathon in 2018. It’s cool. Guys with guns have to stand around because there are polar bears. I love adventure racing.

It’s a good way to see the world, too.

I don’t know when I’ll have time, but there’s a marathon on Easter Island. Why not, right? There’s a race in the Grand Canyon called Rim-to-Rim-to-Rim, so you run down, up and back. How cool is that? You don’t just see the Grand Canyon, you live the Grand Canyon. Now you have an experience where you were actually part of that environment. It sounds cheesy, but it becomes part of your soul. It’s my passion.

Let’s talk about your other passion. Why is now the right time for Fisher Brothers to go full force with its mezz lending platform? Since we last sat down with you, you have hired, Billy Jacobs [a former member of Perella Weinberg Partners’s asset based value strategy].

Fisher Brothers has been an active investor in debt for many years. We were a large investor in the RTC [Resolution Trust Corporation] days. We have always been—besides being operators and developers—investors. About four or five years ago, we looked around at the environment, and frankly between interest rates at zero and what was happening in the space, we saw that this was an opportunity to really create a permanent business. Hiring Billy was another iteration in the sophistication of our investment. We’re good at debt structure and Billy just enhances the bench. We see a void in the market too, because we’re operators—we’re not CMBS [commercial mortgage-backed securities] investors. We’re not trying to just buy pools of debt. We’re really making mezzanine loans on assets that we can underwrite. We take an equity approach to lending because it’s our money. We don’t care if it’s equity or debt. We care that we’re going to get paid back. We see that that has proven to be quite attractive to first mortgage lenders and sponsors. We’re not high-leverage lenders. We’re not loan-to-own.

With land loans, construction loans, transitional loans—the stuff that really requires operational expertise—we’re able to get in and validate a borrower’s assumptions and that helps them get the first mortgage.

Often, a first mortgage lender finds comfort with a developer funding the mezz piece because if the borrower were to hand the keys back, there’s immediately someone who can take over the project.

It’s not just the lender we’re helping. We’re helping the sponsor, too. We have enough history and experience to know that taking over a project is a disaster. We don’t want to take over a project. We think it’s really hard. We can do it, that’s actually one of our abilities, but we also have respect for what that means. What we want to do is really do thoughtful, diligent underwriting, and to find the right projects—they might be hard, they might be hairy, they might be complex—but we can look through that noise and find the projects that are going to be successful.

How is your team structured?

Billy Jacobs runs the effort. We have Sebastian Post [the vice president of acquisitions at Fisher Brothers] sourcing deals. We have a dedicated team to mezz, but the truth is all the other underwriting is done by Fisher Brothers as a company. If we’re looking at a deal that has an office component, our head of leasing gets involved. When it’s development, our head of development takes part in the underwriting. We won’t lend on stuff where we don’t know what we’re doing. So when you say the team, the team is this entire company.

What are some of the more exciting mezz deals you’ve done as of late?

Size is important for us because if you want to go out and get a $200 million loan, there’s actually a lot of competition. We’ll go as low as $5 million, and as high as $80 million, but we think there’s a real sweet spot in that $10 million to $30 million range, especially for transitional assets. You name the big shop, they don’t put out $15 million loans. It’s just too small for them, so we’re happy to step in, and our pricing is competitive. That gets into something like our $7.5 million mezz loan on Tammany Hall [an office and retail repurposing at 44 Union Square], which is an iconic property with an unbelievable location. [Reading International] is a very good sponsor, but this was a new type of project for them. They’re doing adaptive reuse of a historic building which has its own challenges—we’ve done that as a developer. They’re installing a complex roofing system which we think will add tremendous value but it’s really hard to underwrite because it’s not standard: It’s a dome. We got in, we met with the subcontractors. We understand the plans, we understood where the plans were going. The size doesn’t show how complex that deal actually was. And that was great for the sponsor, and that was great for Bank of the Ozarks [who provided a $50 million first mortgage]. We could help be a validator.

Are you seeing greater opportunity in the market because banks are a little restricted when it comes to construction lending?

Definitely. Banks are stopping at 50 percent [loan-to-value ratios], and we’re filling in from 50 to 70. We’re not high-leverage players. You want a 90 percent loan? We are not the people to talk to. But in that segment of 50 to 70, maybe 75 percent, we fit a nice niche, especially on construction lending. We can also do deals as preferred equity. The nice thing is we’re dynamic and flexible, and our goal is to actually work with the sponsor and the bank to come up with an optimal structure.

What’s are you expecting volume-wise in 2017?

We have really robust pipeline of about $80 million now. We definitely saw our pipeline go up dramatically at the start of the year, but it’s hard to predict past what we see today.