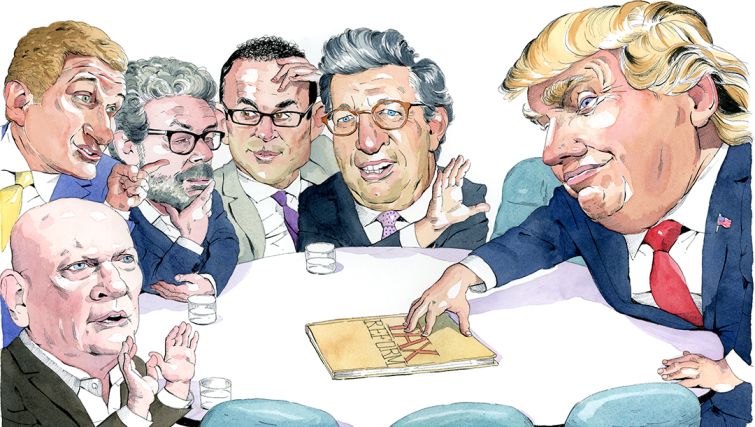 The real estate industry’s wish list for President-elect Donald Trump arrived two days after Election Day. Packets like the 41-page memo from The Real Estate Roundtable have no doubt been filling in-boxes at the transition team’s headquarters. Yet the policy guide from Trump’s real estate brethren presents him with a special quandary.

Trump and fellow Republicans in Congress have placed federal tax reform at the center of their plans. In doing so, however, they’ve called for changes to provisions of the tax code seen as essential to business by members of the powerful national organization of real estate owners, financial firms and trade groups. Winning industry support for any bill may prove tricky.

As much as the real estate industry wants a “simpler, more rational tax code,” a comprehensive bill carries “potential for tremendous economic dislocation,” the Roundtable memo warned. Some reforms pose the risk of lowering property values, which would “produce a cascade of negative economic impacts.”

In other words, Trump’s real estate industry peers want to see the details before they get behind tax reform. And real estate will play a key role in the legislative give-and-take ahead.

The Roundtable urged in the Nov. 10, 2016, memo against adopting one of Trump’s campaign pledges to end the carried interest exemption, as well as against a major source of new tax revenue proposed by the House GOP’s plan. The industry group also asked to preserve an existing tax break often discussed as part of reform. Such stances reflect only a portion of what promises to be a complex debate for all sides.

“In isolation, any provision might be viewed as negative or positive. In an overall context of tax reform, you don’t know. We’ve identified issues that are important to us,” Roundtable President Jeffrey DeBoer said. “That’s what we’re trying to do, is to look at these provisions together and not be hung up on one provision or another provision to the point that you can’t have the conversation around tax reform.”

DeBoer’s words carry clout. The Roundtable spent over $2.9 million lobbying Congress, the White House and other federal agencies in the first 10 months of 2016, according to the Center for Responsive Politics, a nonprofit campaign finance and lobbying watchdog. Only the National Association of Realtors spent more while representing real estate industry interests, at over $45.2 million (but NAR is a member of the Roundtable, making it a kind of happy lobbying family).

The memo to the president-elect’s team came from DeBoer and Roundtable Chairman William Rudin of Rudin Management Company. Members of the Roundtable’s board include Real Estate Board of New York Chairman and Tishman Speyer President and Chief Executive Officer Rob Speyer, Related Companies CEO Jeff Blau and Empire State Realty Trust Chairman Anthony Malkin, among other top industry names. Around half of the white paper revolved around taxes.

The Roundtable understands there will be “pluses and minuses” for everyone involved in the tax reform debate, Rudin told Commercial Observer. He noted the memo also staked out positions on energy efficiency policy and financial regulations.

“That’s why we do what we do in terms of talking about the issues and making sure that everyone understands,” Rudin said. “It’s a little broader of a discussion because all of these things have an impact on our industry.”

But the group told Trump’s team it hopes to preserve an exemption for what is known as “carried interest” for real estate partnerships, deferrals of capital gains from exchanges of similar properties and the deductibility of business interest costs associated with borrowing.

Those provisions comprise only a few of the many areas possibly touched by any comprehensive legislation, said Scott Greenberg, an analyst with the Center for Tax Policy at the conservative-leaning Tax Foundation.

“All I can see is how many issues are going to have to be solved before it gets to the president’s desk, and there are a lot,” Greenberg told CO. “The real estate industry is critical to a lot of salient issues that are going to be part of the tax reform debate.”

Carried interest, which is a managing partner’s share of the profits from a partnership, represents one of those areas.

Right now, carried interest is taxed at the capital gains rate (20 percent), rather than the personal income tax rate (which is in the upper-30 percent range for high earners).

Trump has proposed an across-the-board 15 percent tax rate for corporate or business income; but despite this seeming giveaway, the fear among members of the industry is that once tax reform starts, carried interest will be one of those soft targets that will be the first to go. And Trump has even said that carried interest is in his scopes.

“We will eliminate the carried interest deduction and other special interest loopholes that have been so good for Wall Street investors, and people like me, but unfair to American workers,” Trump said in an Aug. 8, 2016, speech at the Detroit Economic Club.

“A change in the law to tax all carried interest as ordinary income would be the first time that the sweat equity of an entrepreneur who is building a business would be taxed as ordinary income,” the Roundtable’s paper warned. “It would discourage risk taking that drives job creation and economic growth. The proposal would make it more expensive to build modern shopping centers, offices and apartments, especially in long neglected neighborhoods or on land with potential environmental contamination. As a consequence, significant higher-risk development simply will not happen. In short, it would have profound unintended consequences for main streets of cities and towns all across our country.”

Trump has yet to take a position on so-called “1031 exchanges,” named for their particular section of the tax code. Taxpayers who sell one property and buy a similar one may defer taxes on their profits for years under the existing program.

“The like-kind exchange program keeps the market moving,” DeBoer said. “Typically there is more capital that is put into a property that is acquired by an exchange. You’re creating jobs for the people who modernize the building.”

House Speaker Paul Ryan and other Congressional Republicans stayed silent about carried interest and like-kind exchanges while unveiling their blueprint for tax reform this past June. Yet their plan, called “A Better Way,” would have a major impact on interest expenses.

The House GOP plan would end the current deduction of interest expenses for businesses, which borrow capital. The Roundtable objects to the idea, which Trump has not endorsed and his team has said he does not support.

Eliminating the deduction would make capital too costly for investors, according to the Roundtable’s memo. Any limitations on business debt “would dramatically reduce real estate investment, decrease property values across the country and discourage entrepreneurship and responsible risk-taking,” the Roundtable claims.

On the other hand, eliminating the deduction would add $1.2 trillion in tax revenue over a decade and much more over the long term, said Greenberg, the Tax Foundation analyst. The House plan changes other tax rules around interest as well, he noted.

Neither Trump’s team nor Ryan’s office responded to CO’s requests for comment on the details of their plans.

House Republicans look forward to working with representatives for the real estate industry on tax reform “as the real estate sector is such an important part of the American economy,” said Emily Schillinger, a spokeswoman for House Ways and Means Committee Chairman Kevin Brady.

“Chairman Brady appreciates feedback from all stakeholders and believes that homeownership is a critical part of the American dream,” Schillinger said in an email. “We are working to build a tax code that will deliver opportunity to all Americans and strengthen every sector of our economy.”

Industry advocates are waiting on a lot of details to emerge in any bill, National Association of Realtors President William Brown said in a prepared statement.

“Lower tax rates and faster recovery of business assets could make a real difference in all corners of the economy, and particularly real estate,” Brown said.

“We are adamant that certain vital provisions, such as the 1031 like-kind exchange, be preserved, but are eagerly watching the development of tax reform to see how it specifically affects commercial real estate, and we will weigh in with suggestions and comments as the process moves forward.”

DeBoer said he could confirm the transition team received the Roundtable’s memo, but he declined to discuss any takeaways from his talks with Trump or his advisers.

“As the concepts evolve into details, our thinking will evolve as well,” DeBoer said. “And that’s really where everyone is right now.”