REBNY Extending Its Reach From Manhattan Into Brooklyn, Queens and Soon the Bronx 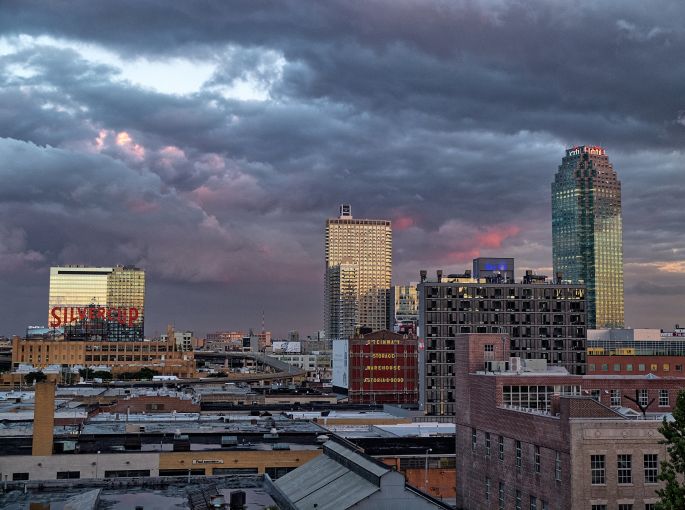 Two years ago, before Steven Spinola, the former president of the Real Estate Board of New York, and his wife, Eileen, REBNY’s head of the residential and commercial brokerage divisions, retired Eileen made a call to Eric Benaim.

Benaim, a veteran broker and longtime member of REBNY who founded Long Island City-based residential and commercial brokerage Modern Spaces, was intrigued at what she had to tell him: REBNY was creating a Queens committee as part of its goal to reach into the eastern borough.

After chatting with Benaim, the trade association decided to host a networking event—REBNY’s first in the borough—at his office at 4742 Vernon Boulevard in Long Island City.

“It was just a way to get to know Queens agents,” Benaim said. “Introducing REBNY so people know REBNY is coming to Queens. As more Manhattan members and Brooklyn members want to come into Queens, they want to make sure there are more REBNY members [in the borough.]”

Queens wasn’t on REBNY’s radar up until that point, which is sort of crazy in a city where mega projects by some of the city’s top developers—like Rockrose Development, Jamestown, TF Cornerstone, Savanna and RXR Realty—crowd the Long Island City skyline, and brokerages like CBRE and Cushman & Wakefield have offices.

But, for whatever reason, it is only over the past decade that the 121-year-old Manhattan-based organization has started establishing a real presence in Brooklyn and Queens. That presence can be seen in the networking events and luncheons it hosts regularly at LINC LIC at 43-10 Crescent Street.

“As more and more of our members sought to do [deals and developments in] Brooklyn—[developers] started in the Dumbo area and moved to Williamsburg and then moved to Long Island City and Astoria and along the coast there—it made sense for us to devote resources for members who already work in those communities,” said John Banks, the president of REBNY. “It was just a natural progression. We now have an Upper Manhattan committee that is relatively new. We have Brooklyn committee that is new. We have a Queens committee that is new.” Both boroughs have residential and commercial committees, which include some fairly big names in commercial real estate—a lot of whom are Manhattan based.

It shouldn’t be overlooked that REBNY is honoring two Brooklyn developers—Forest City Ratner Companies President and Chief Executive Officer MaryAnne Gilmartin and Two Trees Management Company Chief Executive Officer Jed Walentas—at its annual banquet this week. Both are also on the executive committee, which oversees the decision-making and steers the direction of the organization.

“Think about what’s happening in Queens and the South Bronx and all over Brooklyn,” Gilmartin said. “The organization would be foolish not to embrace the other boroughs. I think Rob [Speyer, REBNY’s chairman,] caught the sort of wave of the city being so much more than the isle of Manhattan.”

Of course, to a certain extent, REBNY has always had an outer-borough reach, even if it wasn’t quite as explicit as it is now.

“I think it’s been evolving over the last decade that REBNY is certainly more active in boroughs outside Manhattan,” said David Lombino, a managing director at Two Trees. “It’s also turf where there are significant political issues and that’s where REBNY plays a significant role, like 421a which has a lot of impact on areas outside of Manhattan. I do think there has been an evolution over time, and there was a time that REBNY was hyper focused on Manhattan.”

When REBNY reached a deal with the Building and Construction Trades Council of Greater New York to replace the 421a tax abatement program in November 2016 the implications were certainly apparent in Brooklyn and Queens. If the plan passes, developers of new residential projects throughout the city will be able to receive tax breaks for 35 years in exchange for creating affordable units.

But REBNY still has a lot of ground to cover in the outer boroughs. While the organization said it couldn’t readily break down how many of its 17,000 members are based in the outer boroughs when asked by CO, only a handful of people on REBNY’s 50-member executive committee hail from companies headquartered in Brooklyn (BFC Partners, Forest City and Two Trees) and Queens (Douglaston Development).

And while REBNY has a strong hold on the booming commercial and residential areas of Brooklyn and Queens, it has a lot of ground to make up in sleepy, residential-heavy neighborhoods, according to various outer-borough brokers.

The bulk of the REBNY membership is residential-focused, and for many of the outer-borough brokers, there is a nervousness that REBNY’s large base of agents will provide unwelcome competition and sap off their commissions.

“It’s not a nice thing to say, but they have a primitive mindset,” Benaim said. “And I grew up in Queens. I dealt with brokers before I got into real estate. They don’t care if they have that listing for a year; they will keep holding it. Whereas, REBNY brokers want to get it out there and rent [or sell] for as high as possible and as quick as possible.”

In Forest Hills Gardens, for example—where the average home price is about $2 million—the market is pretty much locked down by one firm: Terrace Sotheby’s International Realty. It isn’t so keen on joining REBNY as it already holds most of the listings in the neighborhood, knows where to get interested buyers, doesn’t want to give up half the commission easily and isn’t interested in doing deals in Manhattan, home to the bulk of REBNY transactions.

“Over the years, I have gone back and forth on whether to join or not,” said Susanna Hof, the owner of Terrace Sotheby’s International Realty. “I’d really like to be a member of REBNY mainly because of the resources and networking. If you have your listing it goes on the REBNY network and every broker has to co-broker. But for us we don’t get the benefit because we have all the listings [in Forest Hills Gardens]…And we know how to get the buyers.”

Benaim, on the other hand, was excited at the prospect of REBNY’s expansion into Queens. He figured more agents would slowly join REBNY, for perks such as a lawyer hotline and insurance for agents, as well as the benefits of co-brokering deals.

“I remember in the beginning we would have an issue with brokerages in Astoria—they weren’t REBNY members,” said Benaim, whose approximately 100 agents handle transactions in Manhattan, Queens and Brooklyn. “One of the reasons that we opened in Astoria [five years ago] is because we were losing a lot of clients from Long Island City to Astoria, and a lot of the brokers in Astoria didn’t want to co-broker.”

And as REBNY wades deeper into the boroughs, there’s a big dog it will have to compete with (at least on the residential side of the market): the National Association of Realtors, and its divisional arm, the Long Island Board of Realtors (LIBOR).

“The issue that we have with becoming REBNY brokers [as well] is there would be double the dues,” said LIBOR’s Western Queens Chapter board member Sal Crifasi of the eponymous Crifasi Real Estate.

Crifasi Real Estate, a residential and commercial brokerage with more than 30 brokers in Brooklyn and Queens, benefits from LIBOR’s networking services and the Multiple Listing Service (MLS), a business platform where brokers can share their listings.

Since brokers on the REBNY side often run into co-brokering problems with non-REBNY members, a little tension has developed between the two sides.

“I have done multiple transactions with REBNY brokers, and for the most part they have been good,” Crifasi said. “Even though we are two separate entities, it has worked well. But then there have been situations that haven’t worked so well.”

He added, “There is a common theme that all people on MLS that are part of LIBOR don’t cooperate with REBNY brokers. The guards are up on both sides, which is not good.”

REBNY and LIBOR have been working on a co-brokering agreement to help encourage its brokers to work with one another, Banks said.

“We recognize the regionalization of the industry in a way that is a bit unique,” he said. “We are engaged in active dialogue with some of those other regions to operationalize some of those natural connections and deals that seem to be coming about.”

Nevertheless, REBNY is considering heading into the next frontier: the Bronx.

“As I indicated, the Brooklyn and Queens communities were an outgrowth of movement toward those boroughs,” Banks said. “I suspect that the Bronx is going to be the next big place for a similar spurt in growth. When that happens we will be there to support not only our members, but to hopefully get people who are not REBNY members and are within the business to become REBNY members.”