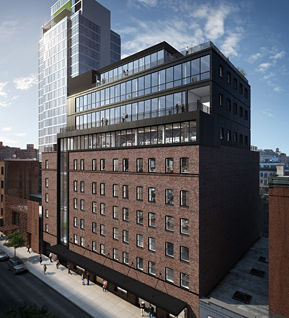 Ticket seller and concert promoter Live Nation has signed a sublease for all of 430 West 15th Street in the Meatpacking District, according to The Real Deal.

The building between Ninth and 10th Avenues is roughly 100,000 square feet and currently leased to Palantir Technologies, the sublandlord. Neither the asking rent in the deal nor when Live Nation will move in was clear.

But in October 2014, Palantir signed its 15-year lease for the whole eight-story building, as Commercial Observer reported at the time. Asking rents in that transaction ranged from $90 to $110 per square foot. The cybersecurity firm also has an office a few blocks away at 15 Little West 12th Street between Ninth Avenue and Washington Street, according to TRD.

A representative for Live Nation did not immediately return CO’s request for comment.

Earlier in 2014, Atlas Capital and Rockpoint entered into a long-term ground lease at the property. Then a six-story former parking garage, 430 West 15th Street was converted into an office building with two additional floors.

Then in February 2016, TIAA purchased the property from the developers for $106.9 million, property records indicate. It was the third building the pension fund had picked up in the Meatpacking District, The New York Post reported in November 2015 when the sale went into contract.