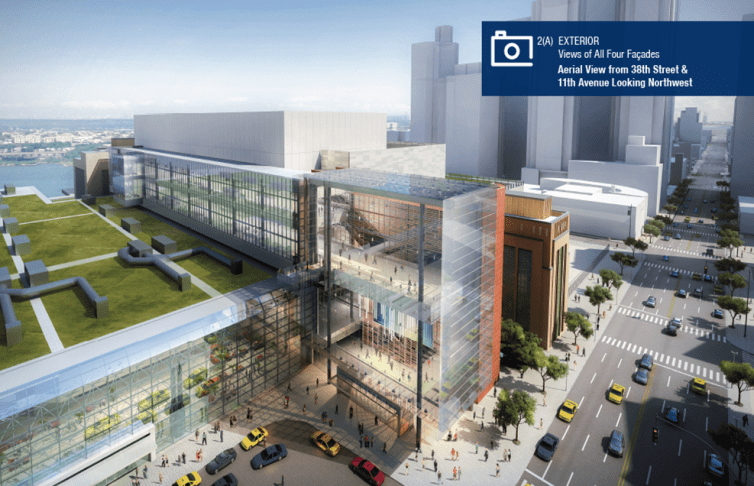 A partnership between Lendlease and Turner Construction has been selected as the developer for a 1.2-million-square-foot expansion of the Jacob K. Javits Convention Center on the Far West Side.

Directors of the New York Convention Center Development Corporation, the state entity that controls the exhibition hall, approved the partnership as the design-builder for the project, which officials expect will cost $1.55 billion.

The partnership, which tapped Atlanta-based architecture firm tvsdesign for the job, was in the running against a consortium made up of Skanska USA, HOK and STV, according to a presentation before today’s vote. (Gilbane Building Company had earlier made the shortlist for eligible developers, but was not in the final round.)

A Lendlease spokesman declined to comment, and a Turner representative confirmed the venture, but did not immediately provide an official comment.

“Skanska was honored to participate in this highly competitive process,” Richard Kennedy, the president and chief executive officer of Skanska USA Building, the construction division of Skanksa USA, said in a statement via a spokesman. “We commend the State of New York for its continued commitment to the improvement of our public infrastructure, which is essential for maintaining New York’s commercial dominance and for expanding employment.”

The eventual winner ranked above the Skanska-led group on its ability to meet the technical requirements such as scheduling and design, according to Sarah Saint-Amand, the president of the convention center committee. Its bid also came in at $26 million less than the one put forth by Skanska, she added.

Basic construction of the new facility, which will be attached to the north end of the Javits Center at West 38th Street and 11th Avenue, is expected to cost $1.2 billion. The remaining $350 million covers the additional costs that include new furniture and insurance for the project.

The development group can get a maximum $12 million bonus (earmarked in the $1.55 billion sum) if the project is done ahead of its 46-month schedule, according to the presentation.

New York state, which owns the Javits Center, has earmarked $1 billion to pay for the bulk of the project. Government bonds issued in 2015 and 2016 will cover the other $550 million, the presentation indicates.

Officials involved in the bidding process told committee directors that the eventual winning design jived with that of the 31-year-old existing glass and steel facility.

The neighborhood around the Javits Center has seen an influx of new development since the facility first opened in 1986. It sits along 11th Avenue between West 34th and West 38th Streets, within blocks of Hudson Yards (under development by Related Companies and Oxford Properties Group) and Manhattan West (Brookfield Property Partners’ multi-building development).

The Javits Center underwent a $460 million renovation between 2009 and 2014 that fixed its leaky roof and addressed the number of birds that flew into the building—often leading to fatalities. Before Gov. Andrew Cuomo announced the expansion of the Javits Center in January 2016, state officials explored constructing a new, larger facility somewhere in Queens.

“For the past 30 years, the Javits Center has fueled the Empire State’s economic engines, and thanks to Governor Cuomo’s vision, we will unlock this New York icon’s true potential and host the most dynamic events anywhere in the world,” Alan Steel, the president and CEO of the New York Convention Center Operating Corporation, said in a press release announcing the selection. “With a recent renovation and a rapidly changing West Side neighborhood, there has never been better time to visit the Javits Center, and this new project will showcase our spaces to new audiences for generations to come.”