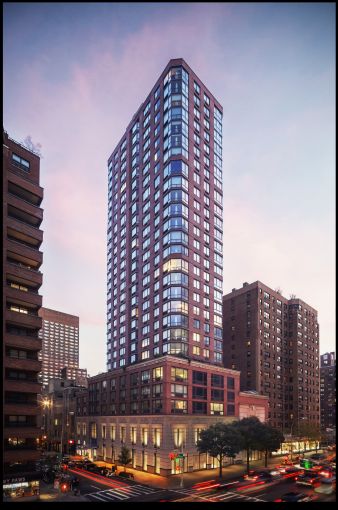 Drybar, a national blowout salon chain, has signed a 10-year, 1,706-square-foot retail lease at RFR Realty’s 300 East 64th Street for its second space in the area, Commercial Observer has learned.

The new location will be on part of the ground floor of the 31-story, 102-unit residential condominium building between First and Second Avenues. Drybar is expected to start occupying the space in the spring. A spokeswoman for the landlord declined to provide the asking rent in the deal. The asking rent on the ground floor was about $260 per square foot in April 2015, as CO previously reported.

“The Upper East Side has been a fantastic market for Drybar,” The Greenberg Group’s Zack Gross, who brokered the deal for the tenant, told Commercial Observer. “The existing location there [on East 76th Street] has always been one of our strong stores. We are excited to bring a second location to be more convenient for all of our customers up there.”

This will be the 16th outpost in New York City for Drybar, which operates more than 65 locations in United States and Canada. Its existing Upper East Side spot is at 209 East 76th Street between Second and Third Avenues.

On East 64th Street, Drybar joins a 5,800-square-foot Barry’s Bootcamp, which is on the second floor.

“We are thrilled to welcome the nation’s premier blow dry bar to 300 East 64th Street,” RFR’s Jordan Claffey, who represented the landlord in-house, said in prepared remarks. “We anticipate bringing another best-in-class retail concept to the last remaining 850-square-foot corner store available in the building.”