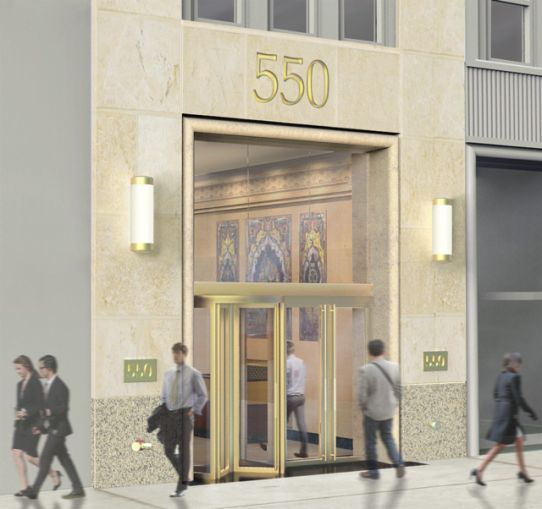 Image of the exterior of 550 Seventh Avenue.

TheaterMania, a source for theater news, reviews and discount theater tickets across the country, is relocating its offices come April 2017 to 12,015 square feet at 550 Seventh Avenue between West 39th and West 40th Streets, Commercial Observer has learned.

The 17-year-old company has leased the entire 16th floor in the Adler Group’s 24-story office building.

“Smart, creative and growing companies from all industries are moving to 550 Seventh Avenue. These firms are looking for high-tech buildings next to the best mass transit in the city,” Michael Heaner, a partner at the Kaufman Organization, said in a statement. “TheaterMania fits right in with our firm’s vision for the building and its existing mix of high-quality tenants.”

Heaner and Sam Stein of Kaufman represented the landlord in the transaction while Robin Fisher and Christie Bennett of Newmark Grubb Knight Frank represented the tenant. A spokeswoman for NGKF didn’t immediately respond with a comment.

The lease is for 10 years and the asking rent was $60 per square foot, according to a spokeswoman for Kaufman.

TheaterMania is taking space previously occupied by Donna Karan International. As CO reported last year, the fashion brand was vacating its roughly 50,000-square-foot space on the 14th through 17th floors by January of this year. As CO reported, the landlord was hoping to attract non-fashion industry, but creative tenants, for the space. InVision Communications took the 17th floor and 14 and 15 are still available.

The building is undergoing a capital improvement campaign for a renovated lobby and façade.