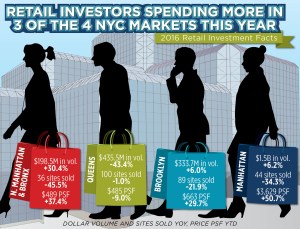 It’s that time of the year again: The holidays are in full gear, and the New York International Council of Shopping Centers’ National Deal Making Conference was this week. As retailers and real estate professionals meet to discuss business and wrap up 2016, the state of the New York City retail real estate market is sure to be a topic of conversation around the Jacob Javits Center. Although retail leasing market trends slowed this year—2016 asking rents are down from the historical highs reached in 2014 and 2015 throughout Manhattan—the New York City retail investment market remains stable. New York City retail dollar volume reached over $2.4 billion through the third quarter but is down 7 percent year-over-year despite three of the four markets posting increases.

Northern Manhattan and the Bronx retail dollar volume had the largest increases year-over-year through the third quarter, up 30.4 percent to $198.5 million transacted, despite the number of buildings sold dropping 45.5 percent to only 36 sold. The average price per square foot is at its highest level on record so far this year at $489 per square foot, a 37.4 percent increase from 2015.

Manhattan retail dollar volume had the second-largest increase year-over-year through the third quarter, up 6.2 percent to just under $1.5 billion traded. The number of buildings sold this year is down 34.3 percent with 44 sold, but there was a premium paid for the sites traded. At $3,629 per square foot, average pricing is up 50.7 percent this year compared with 2015 but still slightly off the 2014 historical high by 1.5 percent.

Brooklyn dollar volume increased from one year ago as well, up 6 percent to $333.7 million through the third quarter. Retail buildings sold this year are down 21.9 percent to 89, but investors are still paying top dollar for sites in Brooklyn. The average price per square foot reached an all-time high at $663 through the third quarter, a 29.7 percent increase from 2015.

Queens is the only market with a slowdown in retail dollar volume in 2016, down 43.4 percent with only $435.5 million transacted. Despite the year-over-year decline, Queens’ retail dollar volume is on pace to finish the year 45 percent above the five-year expansion cycle average. There were 100 retail sites sold through the third quarter of 2016, just one shy of the total through the same time last year. The average price per square foot also dipped this year, down 9 percent from 2015 to $485 per square foot.