Meet VR2, a Robot Out to Change Real Estate and Cut Human Brokers Out (Sort Of) 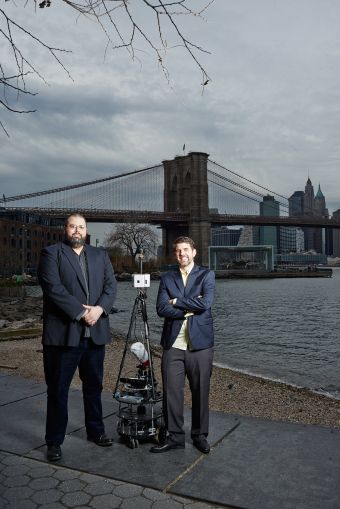 Everybody gets frustrated searching for an apartment in New York City, and Bryan Colin is no exception.

Last year, Colin, a techie who was creating mobile apps, looked at five different two-bedroom, two-bathroom apartments, each advertised as 800 square feet. But when he toured them with brokers, he was extremely disappointed.

“Not one of them was actually over 500 square feet,” Colin told CO. “There were fake pictures, fake floor plans, and I said, ‘This is a disaster. Why are these companies with really nice units that I’m spending a lot of money on not even putting something real online?’ ”

Colin came up with his own idea about how to address the problem: a robot—which simulates walking you through a property, unable to fudge the layout or give you some shtick about phony square footages—was the answer.

“I’m like, Holy shit, this is needed, but we have to build or own software, we have to create our own hardware,” Colin said. “We needed to figure out how to do this. It’s not [just] an improvement, it’s the future of real estate.”

The concept of a virtual reality real estate broker has been around at least since the 1987 dystopian cyberpunk action picture, RoboCop, when Peter Weller tours his old house (now up for sale) and encounters an endless series of television screens where a cheerful broker makes his pitch. (Weller ends the sequence by smashing one of the screens with his fist.) And there have been a number of companies in recent years, like the recently merged Hightower and VTS (formerly known as View the Space), which have tried to use technology more in real estate brokering—Colin being the most recent example.

In November, Colin’s company, VirtualAPT, debuted a robot (nicknamed a very Star Wars-like VR2) that took his nine-person team nearly a full year and approximately $125,000 to build. It creates real, not rendered, virtual reality videos with voiceover tours of residential and commercial spaces. And the videos move through the spaces and can be streamed online. This is different from current virtual reality offerings for real estate, which are for the most part 3D renderings of unbuilt properties, which jump from place to place within a space, rather than move fluidly.

While the idea of a robot might sound like a gimmick, Colin is adamant that this adds a new level of reality to the experience.

“On the surface it appears to be pretty exciting,” said Daniel Conlon, a managing director for Two Trees. “We are cautiously optimistic about it reaching a massive audience.”

VR2 looks (to the untrained, non-techie’s eye) like a project thrown together by children using whatever spare parts are lying around. Its multiple lenses that capture all directions are affixed on a tripod, which is situated on a base with a microphone that protrudes. At the base there are wheels and a motor for movement, and the remote—actually an Xbox controller—is used to guide the robot through spaces and start or stop recording.

The robot takes approximately 30 seconds to map out 2,500 square feet, so the machine can create virtual reality videos of most rooms in a few minutes. VirtualAPT can generally turn around fully finished video tours for clients (with voiceovers and other additions) in hours.

Pricing depends on the size of the layout, but the average is about $4,000 per 8,000-square-foot space, Colin said, for a one-time fee.

“It’s relatively inexpensive compared to some of the other [virtual reality competitors], and the actually experience for those actually using the VR [or Virtual Reality] is very clean,” said Abe Naparstek, a senior vice president at Forest City, which has tapped VirtualAPT to create virtual spaces of its common areas and some apartments at its NorthxNorthwest residential complex in Philadelphia. “We have seen a lot of other clunky applications that we have passed on, and this is the first one that we have decided to look at seriously.”

But what does VirtualAPT’s invention mean for brokers? Could this actually eliminate the broker?

Colin, for one, is not quick to sound warning bells. He is currently on the lookout to do deals with brokerages so they can make virtual reality videos of spaces for their clients. Brokers will still be necessary for contract negotiations and advising clients, he assured.

“I think the ability of a broker to highlight a space—the uses and the downsides—and the storytelling salesmanship that brokers have adds to the experience,” Colin said.

And, yes, it’s not merely developers and landlords who have seen the benefit of something like VirtualAPT; brokers have started to, too. Eastern Consolidated’s Brad Cohen, a senior director, recently hired VirtualAPT to make a virtual reality tour of a retail space at 620 Degraw Street in the Gowanus section of Brooklyn.

“Bryan and the team at VirtualAPT have created the most realistic representation of what it is like to tour a property,” Cohen said via email. “This is Google Street View on steroids.”

Despite all the technical advances and proliferation of sites like StreetEasy, which arm tenants with a lot more information than they’d ever had before, the broker ranks has stayed fairly flat going from 25,485 licensed brokers (not including salespersons) in 2007 to 25,650 brokers today, according to the New York State Department of State.

“Now, we have so much access to open data that I can search property listings right now online in China and in any place that I can imagine,” said Mariel Ebrahimi, a co-founder of Boston-based DistruptCRE, which hosts various technology-focused conferences for the real estate community. “So why do we need the real estate broker? The owner has so many new opportunities for how to sell, buy and invest in real estate today that a broker needs to be an adviser. They need to know about all of these new opportunities for every type of tenant that could possibly be out there and be that open guide and trusted adviser.”

VTS Co-Founder Nick Romito agrees that brokers won’t be replaced by technology like VR2 but will be forced to be more efficient or face peril. His company, which was launched four years ago and is a leasing and management platform that provides data and videos of properties, recently completed a $300 million merger with rival Hightower.

“There’s just not a scenario in which brokers get cut out, at least [not] anytime soon,” Romito said. “Their role changes over time in my opinion, becoming much more consultative, which frankly is where they want to be versus touring space for a large part of any given day. People in the residential space thought [property searching website] Zillow was the ‘great disruptor’ of brokers when they first launched because of all the rich content. The result is the opposite. There are far more residential brokers now than prior to the Zillow days.”

Romito added, “Transactions will definitely move faster. In fact, our clients tell us consistently that they’re seeing a significant decrease in downtime by using VTS.”

However, other experts counter that advancements in technology will weed out lazy brokers and ones that aren’t up to snuff on how to use the gadgets.

“Technology is a barrier to entry. It makes really good brokers better and really shitty brokers worse,” said Ashkán Zandieh, the chief executive officer at investment sales marketplace Falkon and a founder of research company RE:Tech. “This business is an eat-what-you-kill business, and if you are not hunting then you are not killing. It’s survival of the fittest. You have to have good fundamentals, and then the technology will help you like superpowers. But it could become your kryptonite.”

So far the real estate industry has been historically reluctant to embrace technology. One reason is the additional costs. Another is fear of change. And a third is fear of becoming extinct.

“Originally when VR in commercial [real estate] came out it was way too expensive,” said Zachary Aarons, a co-founder of real estate tech accelerator MetaProp NYC. “The way developers have their budget set up, VR is going to come out of your marketing budget. The big developers had the money to do it and did some really cool things—like Related [Companies] at Hudson Yards.”

Real estate pros have also been slow to adopt technology because they’ve been overwhelmed by the sheer number of tech startups.

From 2012 to 2015, 282 real estate tech startups, on average, were launched each year, according to statistics from RE:Tech. The company also found that 80 percent of brokers complained that there were too many tools at their disposal.

“If you are a commercial real estate broker, you get slammed with 280 emails from real estate startups,” Zandieh said. “Just imagine 280 startups emailing you every day. And it’s the same product offerings with different names.”

While other companies haven’t made a robot like VirtualAPT, there are many competitors when it comes to showing space through technology. VTS was a pioneer in online videos for spaces. It has started incorporating 3D renderings into its platform but has stopped short of using virtual reality.

And Matterport, a California-based provider of 3D images for various industries including real estate, has been making waves in the industry. It has now raised about $61 million, according to TechCrunch. And CBRE invested an undisclosed amount in the company in August.

“It’s a smart move for us so we can stay informed on [new] real estate technologies, and more importantly how those technologies can be used to better service our clients,” said Anish Mehta, CBRE’s senior vice president of technology. Mehta wouldn’t disclose what other tech companies CBRE has invested in at this time.

There is also Xceligent, a firm that focuses on data and research in commercial real estate. Xceligent launched a product in October called Spaceful that allows brokers and tenants to upload pictures, data and information online while on site tours, so they can record and then review the spaces more efficiently.

“When you go on a tour, you often don’t properly remember what you saw,” said Joe Emison, the chief information officer of Xceligent. “You know less and as a result of the tour, you end up being more indecisive. [Xceligent Spaceful] is a seamless way to log, take photos, information and comments. Hopefully, now it’s just one tour and it really counts.”

And residential listings website StreetEasy, which was purchased by Zillow in 2013 in a $50 million transaction, as Bloomberg News reported at the time, announced a partnership in August 2016 with tech company Floored to provide interactive 3D floor plans of listings.

“Virtual reality is the next big technology frontier,” Susan Daimler, the general manager at StreetEasy, said via email. “It’s something that’s top of mind at StreetEasy as we incorporate tools like 3D floor plans into more listings.”

Standardizing virtual reality is the next step.