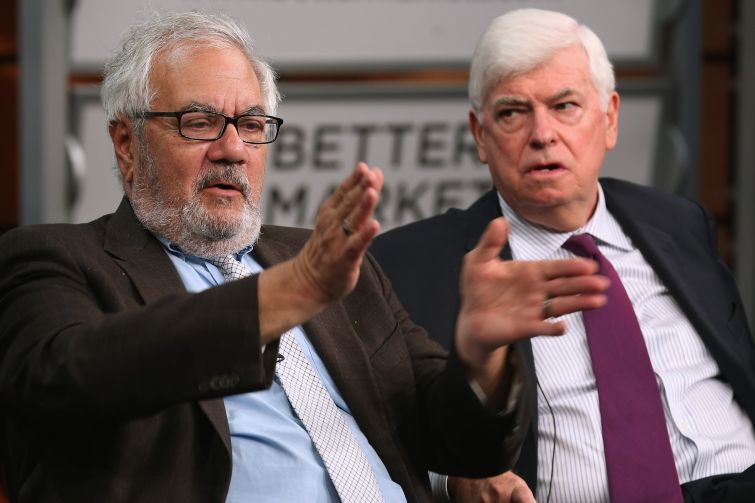 President-elect Donald Trump has said a lot of things. But as far as the commercial real estate debt market is concerned, there’s one thing he’s said that could have a tremendous impact: overturning the Dodd-Frank Wall Street Reform and Consumer Protection Act.

“I have no idea what [Trump’s] going to do, so there’s no point in me speculating,” Frank told Commercial Observer. “There’s a great deal of contradiction. He wants to bring back Glass-Steagall [the New Deal-era regulation of banks, repealed in 1999]. He doesn’t like big banks. Does that mean he’s going to repeal the restriction on credit default swaps? It’s too early to tell.”

Nonetheless, killing the bill would be consistent with Trump’s recent statement that he “would eliminate two regulations for every one enacted,” Heidi Learner, the chief economist at Savills Studley, said via email.

Sam Chandan, the associate dean at NYU Schack Institute of Real Estate, took a balanced view on the fate of the bill. “While there’s a lot about this election cycle that has been inconsistent with historical patterns, one of the things that is consistent is that there is moderation in policy positions in the aftermath of the election,” he said.

“On closer examination we’ll find that while in principle the Republican Party will want to see fewer regulations, they will be less aggressive in pursuing enforcement,” Chandan continued. “They will find elements of Dodd-Frank that are helpful and useful and some provisions that aren’t going to make sense given their positions.”

Whether or not Trump will follow through remains unclear, but he is certainly not alone in his disdain for Frank’s namesake law. Many Republicans have been outspoken about different elements of the 2010 bill they find damaging, but the Volcker Rule, which limits banks’ proprietary trading abilities, stands out. The cost of compliance is disproportionate when it comes to smaller community banks, which are negatively affected. Frank himself has echoed that sentiment and, in a previous interview with CO, said, “I think that some of the smaller banks that aren’t covered by some of the rules, in particular the Volcker Rule, have spent too much money proving that they are not out of compliance with the rules that were never aimed at them in the first place.”

Chandan noted that if Dodd-Frank were to be repealed, there would need to be some sort of regulation to replace it. And if that’s the case, the GOP is ready: Republican U.S. Rep. Jeb Hensarling, the current chairman of the Financial Services Committee, has backed the Financial CHOICE Act (Creating Hope and Opportunity for Investors, Consumers and Entrepreneurs) as a replacement for the Dodd-Frank Act.

As Hensarling said in a speech at the Exchequer Club on Nov. 16, the Financial CHOICE Act would turn single-headed regulatory bodies—like the Consumer Financial Protection Bureau, the Office of the Comptroller of the Currency and the Federal Housing Finance Agency—into bi-partisan agencies. The act would also require that Congress approve any major financial regulations before they can take effect, as well as end “too big to fail,” which is one of the key ideas behind Dodd-Frank.

“Proponents of Dodd-Frank promised it would end ‘too big to fail’ [the theory that some financial institutions are so gargantuan that their failure would wreak havoc on the economy and therefore they must be supported by the government in the event of failure] and taxpayer-funded bailouts,” Hensarling said. “But it did the exact opposite. Dodd-Frank writes ‘too big to fail’ and taxpayer-funded bailouts into law.” (For his part, Frank disagrees with that assessment: “I’m astonished that people say that,” Frank told CO back in July. “It would be illegal for any federal official, specifically the federal director of the Treasury, to step in and pay the debts of a failing institution without abolishing it.”)

The solution, he said, is “bankruptcy, not bailouts.” Learner noted that bankruptcy was not necessarily the lesser of two evils and pointed to Lehman Brothers, which took nearly four years to come out of official bankruptcy, not to mention the additional time it took liquidate all of the firm’s assets.

“There are some ‘good’ parts of Dodd-Frank, so I think we should be careful not to throw the baby out with the bathwater,” Learner said. “Credit risk retention on mortgages and greater credit rating agency transparency are positive outcomes. It seems that one of Hensarling’s major initiatives is to replace the ‘orderly liquidation authority’ or wind-down of banks with a bankruptcy process. However, the point of any financial regulation should be to eliminate the need for either a wind-down or bankruptcy; regulation should be about ways to help prevent us from getting there. It’s as if a doctor is more concerned with managing a patient’s final days than with his life while he’s relatively healthy. I think it’s too soon to tell how far Hensarling’s proposal will go, but he will have the most receptive audience yet in the way of the executive and legislative branches.”

While we have yet to hear if Trump will pursue Hensarling’s bill, the potential end of Dodd-Frank will likely not come without a successor regulation. But even if there was not replacement, Republicans may not see the growth in the financial sector that they claim has been strangled by Dodd-Frank.

Chandan said that he wouldn’t expect there to be “unbridled lending” merely because Dodd-Frank disappeared.

“Ultimately, every bank has to worry about its own health, longevity and function,” he said. “Even if you were to strip away all new regulatory constraints, they may still find themselves [not originating a loan] on a high quality property because their own credit officers may say not to, out of a desire to preserve their own institution even if not concerned with overall financial instability.”