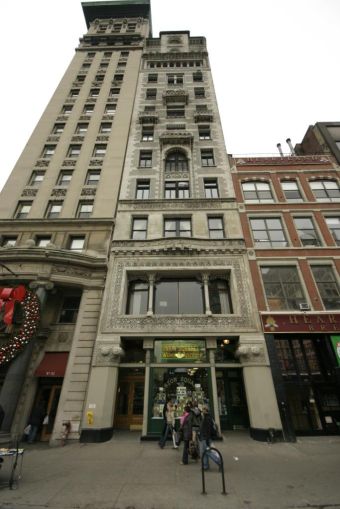 Sterling National Bank has provided a $27 million loan to refinance 33 Union Square West, according to records filed with the city today.

The loan is part of the Morgan Stanley-sponsored MSC 2007-T25 commercial mortgage-backed securities transaction, according to a source familiar with the deal.

United American Land has owned the property since 2006, property records indicate. Bear Stearns provided a $25 million mortgage at the time, which has been replaced with the new financing from Sterling. Meridian Capital Group arranged the financing, with Charles Grussgott leading the deal.

The 11-story mixed-use property, also known as the Decker Building, was built in 1900 and has a prime location on Union Square between East 16th and East 17th Streets. The building was constructed for piano manufacturer Decker Brothers Piano Company, who first occupied it. Perhaps more famously, the property was the scene of Andy Warhol’s attempted murder in 1968. The artist had a studio in the property until 1973, and was shot three times there by Valerie Solanas.

Dylan’s Candy leases the 3,364-square-foot ground floor of the building, which is currently 100 percent occupied, according to data from Trepp.

Officials at United American Land and Sterling National Bank did not immediately return requests for comment.