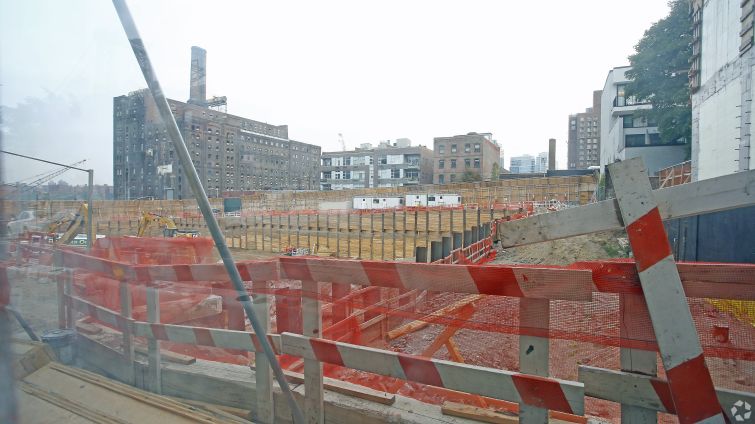 A construction worker fell to his death this morning while working on the façade of the former Domino Sugar Refinery in the Williamsburg section of Brooklyn.

Wilfredo Enriques, 59, had been working for subcontractor PG Products of New York, which is doing exterior work and window installation at the site. He fell from suspended scaffolding at the building’s sixth floor, landing on a setback two stories down, a source in the know told Commercial Observer. Police responded to the site, 325 Kent Avenue between South 3rd and South 4th Streets, shortly after 8 a.m. when they found the man who had suffered from head trauma.

Enriques was wearing a harness at the time, but it was not secured and anchored to anything, according to New York City Department of Buildings officials. The agency is investigating the incident. There were no prior complaints at the site.

“Our message to construction professionals is simple: experience is not enough,” DOB Commissioner Rick Chandler said in a statement. “Taking a few extra moments to ensure safety guards are in place before working can be the difference between life and death.”

First responders transported Enriques to Woodhull Hospital less than two miles away, where he later died, according to the police. The New York City Office of Chief Medical Examiner will determine the cause of death as the investigation continues.

Two Trees Management Company is in the process of converting the 11-acre site formerly occupied by Domino into a mixed-use facility featuring commercial space and affordable housing. A spokesman for the company said the site had been shut down and indicated the fall was accidental.

“We are overwhelmed with grief by this tragic accident and extend our deepest condolences to his family, loved ones and colleagues,” according to a statement from Two Trees. “All work has stopped on the site and we are working closely with the city to determine the cause of the accident.”

John Gibney, a principal of PG Products of New York, issued a statement following the incident in which he referred to Enriques as “a dedicated employee and friend” over the last 10 years.

“We are fully cooperating with Two Trees and the DOB to understand how this tragedy occurred,” he said.

This is the second incident within the last month in which a construction worker has died on the job. A crane operator and a member of his crew were killed on Nov. 22 in the Briarwood section of Queens, when a beam came loose as it was hoisted, and crashed down on the two, as CO previously reported.

Gary LaBarbera, the president of the Building and Construction Trades Council of Greater New York, issued a statement following today’s fatality, calling on the city to be more proactive on safety issues.

“Incidents like today’s, which are preventable, happen all too often and underscore the need for the mayor, the City Council and the Department of Buildings to work together to enact greater site safety regulations and mandatory safety training and apprenticeship programs,” he said. “Construction workers lives do matter and we can no longer tolerate irresponsible developers and contractors putting profits ahead of safety. This must end now.”

Update: This story was edited to include the identity of the victim and a comment from the subcontractor.