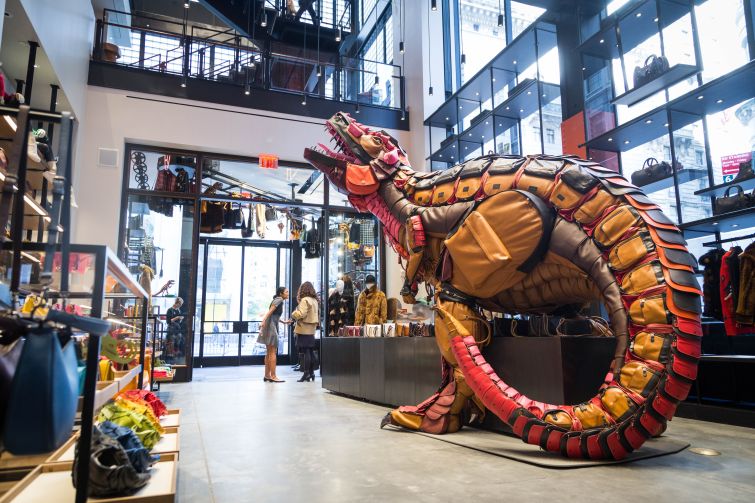 “I wanted people to be able to come here and discover new things about Coach,” said Stuart Vevers, the creative director of Coach, “but I also felt it was important that people could express their individuality and their personality through the services we offer here.”

He was describing Coach House, the brand’s newest flagship concept, which opened its doors to much fanfare at 685 Fifth Avenue on the corner of West 54th Street on Nov. 18.

But calling Coach House a “flagship” is a little like calling St. Peter’s Basilica a “chapel.” The word feels a little unworthy of the boutique’s ambitions.

The 20,000-square-foot shop is spread across the building’s bottom three floors and is now Coach’s largest store in the world and perhaps the priciest, too. Commercial Observer reported on the lease in February 2016, when the asking rent on the ground floor was a whopping $4,000 per square foot. New York-based design and architecture firm Studio Sofield carefully pieced together the space, though Vevers played a pivotal role in ensuring the house codes of Americana and heritage were honored.

Here are five of the most notable features of the awe-inspiring temple of retail.

One. First, let us start with the elephant in the room. Or, as the case may be, the dinosaur in the room. A major centerpiece of the ground floor is Rexy, a 12-foot dinosaur. Artist Billie Achilleos created this towering leather sculpture from 400 bags. “From beginning to end, it was a nine-month process to create Rexy,” explained Vevers. But almost as impressive, Achilleos didn’t use any specially made bags for the process; it was all pure Coach.

Two. New York is Coach’s hometown, so it was a natural focal point, as even the polished concrete floor is a nod to the city’s sidewalks. The artwork is in theme as well, as a boulder from Central Park can be found on the second floor, though this interpretation was crafted in wood by Brooklyn sculptor, Kurt Steger, and a vintage aerial photo of Manhattan looms large over the central staircase.

Three. The exterior of the Coach flagship rivals the polished interior, thanks in part to the 45-foot glass block exterior. Ensconcing the entire store in a jewel box, the abundance of glass provides a warm wash of natural light within the shop.

Four. Shoppers who wonder exactly how their bags are created will get some insight into the process, as a Coach craftsman will be permanently stationed on the second floor of the shop. With over 30 years of experience, the in-house artisan will be handcrafting various accoutrements, doing repairs and stamping monograms. Customers can also whip up a Rogue bag of their own design, out of over 1 million combinations, at a leather-festooned station on the third floor.

Five. There’s a reason why the year 1941 is often associated with Coach; it’s the year of the brand’s inception. As such, the heritage brand decided to cull design inspiration from the decade of its founding but in the subtlest of ways. Little details such as the vintage-inspired elevator buttons, subway tiling and pendant lights are a throwback to this earlier era.