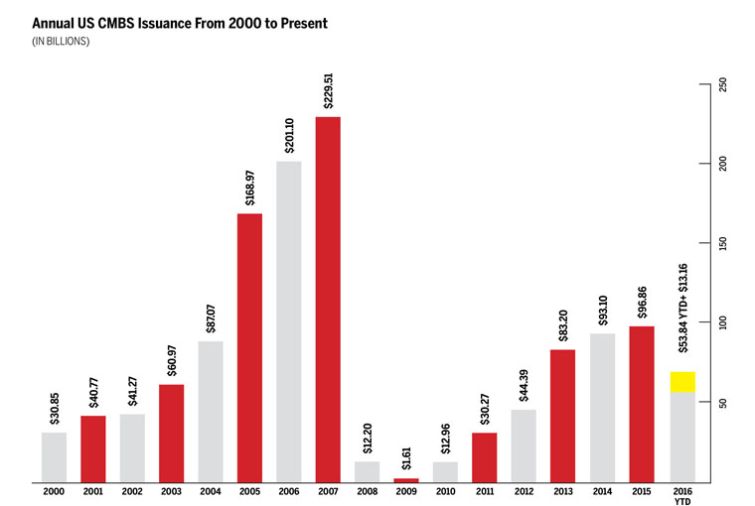 Annual US CMBS Issuance from 2000 to Present rheaarao

The amount of newly issued commercial mortgage backed-securities deals in 2016 currently sits at $53.84 billion and may not exceed $67 billion this year, according to data from Trepp. This is the lowest amount in three years, breaking what seemed like a steady pattern of recovery since the financial crisis.

The CMBS market rose gradually until the mid-2000s, increasing by nearly $20 billion each year from 2002 to 2004 and then accelerating by a whopping $81 billion in issuance the following year. It reached its peak at $229.51 billion in issuance in 2007. This year, most of the issuance volume was comprised of those pre-crisis, 10-year loans, which carried maturity dates ranging from 2016 to 2018.

Not surprisingly, the 10th year of the loan term has the highest default rate, a cumulative of about 3 percent. Most of these defaults occurred during maturity, according to a CMBS default and loss study by Kroll Bonding Ratings Agency. But other than year 10, the highest default rates were seen in the fourth, fifth and sixth years of the loan term—making up about 40.6 percent of the total default rate. This may signal to some that hitting the maturity wall isn’t the worst thing for CMBS loans.

“We do see an uptick in CMBS delinquencies because a high number of loans are maturing this year,” said Sean Barrie, an analyst at Trepp. “But the rate of incline has been small and that’s encouraging.”

That being said, risk retention kicks in at the end of this year under the Dodd-Frank Wall Street Reform and Consumer Protection Act. Part of the law requires issuers to keep 5 percent of the loan they’re selling to the market in the form of bonds, which is referred to as risk retention. Alternatively, they can sell this as a subordinate bond, which then must be held by the purchaser for at least five years.

“We’ve seen a pull back in the market because of this,” Barrie said. “There have been some risk-retention–compliant deals, but we haven’t seen much.”

There is concern in the market that these rules might pinch the profit margins of smaller CMBS shops which might be forced out of business. But it is not only risk retention that could make this happen. The cost to conduct a securitization program and be profitable is already proving to be challenging.

KBRA estimates issuance to be in the range of $55 billion to $65 billion in 2017 (specifically private label issuance) after risk retention goes into effect, but some issuers think otherwise.

“Most of the issuers I’m speaking with are actually planning to go higher than our estimate,” Larry Kay, a director at KBRA, said. “So I think risk retention will have an impact but won’t affect issuance in any way, shape or form.”