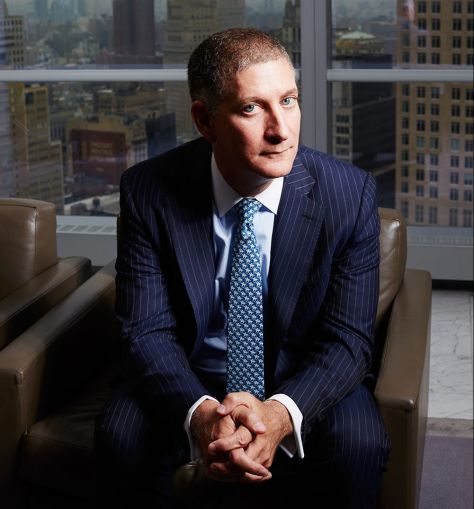 In 2009, Marty Burger met his second wife and Larry Silverstein in the same week.

Both of these matches have been happy ever after—even if he speaks to Silverstein 20 times per day and his wife is lucky to get him for a movie before retiring for the night.

Burger—the sole chief executive officer of Silverstein Properties since 2014—has managed to maintain a very rigorous schedule. To put it in Lin-Manuel Miranda–speak: “The man is non-stop.

If he’s not dining at a restaurant in one of the Silverstein properties, like CUT at 30 Park Place (which he has a nice view of from his office at 7 World Trade Center), or battling with Silverstein’s attorneys at the tennis court, Burger also has a pretty active second career life with the Urban Land Institute.

Indeed, Burger has been actively involved in the nonprofit specializing in development and land use since he was at Related Companies. (He joined the firm in the 1980s, left to work at Goldman Sachs and Blackstone Group and then returned to Related in the late 1990s.)

At a recent ULI event in Dallas, his nametag looked something closer to a four-star general’s ribbons than that of a CEO’s identification—so there was a ribbon for each of the various roles he held with the group as well as to note that he would be speaking at the event.

In July, the 51-year-old native of Huntington, Long Island, took over as the chairman of ULI’s New York chapter, replacing Island Capital Group’s Robert Lieber, who had held the title for the three years prior. He sat down with CO to talk about that as well as his day job.

Commercial Observer: What are some of the things you want to accomplish in the ULI role?

Burger: We have, I think, 2,600 members in New York. My goal is not just to increase our membership but also to get our current members to be more active. So I’d like to find new members that want to participate, but I’d like to get more participation from those that have been involved and want to be involved.

We’ll…have Harry Macklowe come in, or Steve Ross, or Larry Silverstein, and present their projects. That’s a big part of why the members need to be involved and stay involved.

Busy. [Laughs] Fulfilled. Today I was at a six o’clock spin class; I was at a 7:30 tennis match against one of our real estate attorneys, Jonathan Mechanic. [Burger was leading 5-4 in a third set that morning before calling it quits.] We have a real estate circle that plays tennis. I have a full day that goes to late tonight where I’m driving up to an event upstate.

But, you know, I was brought on to be a “deal CEO,” so I get less involved with the administrative stuff running the company and more involved with the projects that we work on, the businesses that we’re in and the future of what we’re doing.

You started as co-CEO five years ago.

Seven years ago I started as an executive vice president. We said, “Let’s take two years and see how it goes.” At the end of the two years Larry said, “Hey, it’s working out better than I thought.” I said, “Great, because I think it’s working out better than I thought.” Larry said, “There’s one issue: I’m not ready to step down.” I said, “Great. If Larry Silverstein is in the office, I can get a meeting with anyone. And I love working with Larry.”

Larry’s son-in-law, Tal Kerret, came into our business in between 2011 and 2012. And he’s now the president of the company, and he’s also the family liaison between me—the CEO—and the company. So if Larry’s not here, if he’s on his boat or something, Tal is sort of the family member whom I coordinate with. Tal and I are very close. We’ve worked closely together; we’re on the [Silverstein] investment committee together.

Did Larry approach you to join his firm or were you in the market for a new job?

I had left Related in 2006 after spending 15 years with them. I was running a bunch of businesses that I had created in Las Vegas but coming back and forth to New York. I got a call from a search firm, saying, “We’re looking for Larry Silverstein. We’re in the middle of a search to help find a successor.”

I came in and spent a lot of time with Larry, from May 2009 to October 2009. We agreed that I would start [as an EVP] in the beginning of 2010. He loves having me here; I love waking up in the morning and getting here.

How often in a given week do you and Larry speak?

Twenty times a day. Larry leaves the office, and he’ll go on his boat for a week, occasionally. He gets on the boat, and he calls us. We’re always in touch.

You said you were brought in to be a “deal CEO.” What’s the most interesting deal you have done since joining?

Well, I mean, the World Trade Center is a fascinating project. But just this project here [motions to 30 Park Place] was phenomenal. That was a real tough one to get financing for—it was a $1 billion project.

All these projects are their own animals. There’s nothing generic that we do here, and that’s part of the fun. It makes it more difficult because it’s very big numbers and it’s not cookie-cutter, so you have to reinvent the wheel each time you’re raising money for either debt or equity. But it’s exciting because they’re really game-changing projects.

Can you walk us through securing the financing for 30 Park Place in 2013?

We originally had a big-bank group that was going to come in, both senior and mezzanine [lenders]. One group [The Children’s Investment Fund] came in and said, “For a little bit more money, we’ll give you the whole thing.” It was one-stop shopping. If I had a construction issue, a timing issue or a legal issue, I talked to one person and got it approved. Versus if I had a bank group, I’d have to talk to the lower-tier bank group and the upper-tier bank group, and they’d all have to agree to it. It would take six months to make a change.

How much time do you dedicate to World Trade Center development versus everything else?

What was the experience of negotiating with News Corp. and Fox like?

It was going to be an exciting, exciting project. It’s too bad that the economic times made them change their direction. [Their 1.5-million-square-foot lease would have anchored the planned 2.8-million-sqaure-foot 2 World Trade Center but fell through last January.]

But it would have been a phenomenal building, and we’re better off for it because we have a new design for the building that is sort of [technology, advertising, media and information services] cool. I think it will position us for the next tenant who comes along that wants to be in that building.

The attorney general’s office is going to leave about 334,000 square feet at Silverstein Properties’ 120 Broadway and move to 28 Liberty

Street. Is there a strategy yet on marketing that space?

We’ve had a lot of traffic lately with lots of prospective tenants. We just had a tenant for well over 200,000 square feet come through that’s interested. We’re spending a lot of time with the brokers in the market to make sure that space gets filled. They’re not leaving until the end of 2018, so we have time. New York has a history of back filling. It’s a focus of ours, but it’s not a major concern.

Regarding your exercise routine, how do you keep so active given everything else that you’re doing?

I fit a lot into one day. I don’t require a lot of sleep, which is good.

How many hours do you get?

We had a broker event at Eataly [Downtown] last night for all the office brokers for the World Trade Center. All the different brokerage houses were there. And then I held another dinner afterward at our Wolfgang Puck’s CUT steakhouse [at 30 Park Place]. I got home around midnight. I watched a program with my wife until 1 a.m. and went to sleep. I was up at 5:15. So I slept four hours and 15 minutes and was at SoulCycle by 6, at tennis by 7:30 and at the office by 10.

Who is the better tennis player, you or Jonathan Mechanic?

I would say that I’m a stronger tennis player than Jon. We have a really strong group of guys that play on Thursday morning. There are eight of us, so we rotate around. I only play him like once every third week. Our general counsel, Jonathan Knipe, plays in that game. He’s a very, very strong player.

Tell us about your ski trips.

I started running a ski trip 18 years ago when I was at Related. Originally, it was for our equity partners, our lenders, our architects and our lawyers. It grew from an 18-person trip to 124 people last year.

We descend upon Vail at the beginning of March, on a Wednesday, and it goes through Sunday. We have four dinners together. We all ski together for three days. We have a couple of other events like ski biking.

Every Friday morning, we have a theme. So last year it was Clown Day. We all dressed up like clowns. We took a picture: It was all 124 of us in clown outfits. For the entire day, we’re skiing around in these clown outfits. This time it just happened to roll into happy hour. So we were all singing and dancing and drinking in our clown outfits until about 11 o’clock at night. It was pretty funny.

Were there other guests in the place you were staying?

Well, we were in Vail, Colo., which is a pretty big place. We were noticed; I got in the paper the next day. I was in the Vail Daily.

What’s the theme for next year?

Clown Day was so popular that I think we’re going to bring it back as a staple on Saturday and do some other theme on Friday. We haven’t picked it yet.

You got a speeding ticket once skiing, right?

I did. It’s framed. I got two actually.

How does one get a speeding ticket?

I guess if you’re going too fast and they don’t like it, they slow you down.