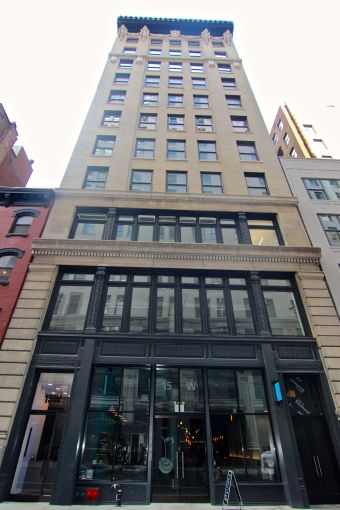 The network, known for shows like The Kennedys, Celebrity Page and Beverly Hills Pawn, is taking the entire fifth floor of the building between Fifth Avenue and Broadway. Asking rent in the 10-year transaction was in the mid-$60s per square foot, according to information provided to CO by Kaufman.

In mid-January, New Mexico-based ReelzChannel will move from its current 2,380-square-foot digs at 122 East 42nd Street between Park and Lexington Avenues, according to CoStar Group. That office handles the company’s advertising sales. The new location will be able to accommodate up to 26 employees.

“Since I started here, I’ve seen my staff grow from six people to 23 people,” Bill Rosolie, the senior vice president of advertising sales at ReelzChannel, told CO. “So we needed more space.”

Rosolie added that the move will help them get closer to their clients, manly advertising agencies, which have been increasingly moving to the West Side.

“Madison Avenue isn’t Madison Avenue anymore,” he said. “Out of all of the [advertising] agencies, there are three of them left on the East Side. We wanted to go closer to the West Side.”

Newmark Grubb Knight Frank’s Stephen Gordon, who represented ReelzChannel in the transaction, did not immediately return a request for comment via a spokeswoman.

“We are thrilled that 15 West 27th Street is following in the success of 119 West 24th Street and 19 West 24th—both buildings have recently reached 100 percent occupancy,” Kaufman’s Grant Greenspan, who represented the landlord in-house with colleagues Michael Heaner and Elliot Warren, said in a statement. “We’ve seen that companies are looking for immediate occupancy and have shown excitement for our pre-built spaces at 15 West 27th Street.”

In another recent deal at 15 West 27th Street, San Francisco-based advertising agency Muh-Tay-Zik Hof-Fer inked a deal for the entire 5,909-square-foot fourth floor of the building, Kaufman indicated. That tenant has already moved into the pre-built space. Jamie Katcher and Sebastian Infante of Cushman & Wakefield represented Muh-Tay-Zik Hof-Fer in the transaction. The asking rent in the deal was in the mid-$60s. Kaufman’s Greenspan, Heaner Elliot and Warren repped the landlord in-house in that deal as well.

“15 West 27th Street allows [Muh-Tay-Zik Hof-Fer] to develop a brand identity in one of the most in-demand creative neighborhoods,” Katcher said in prepared remarks.