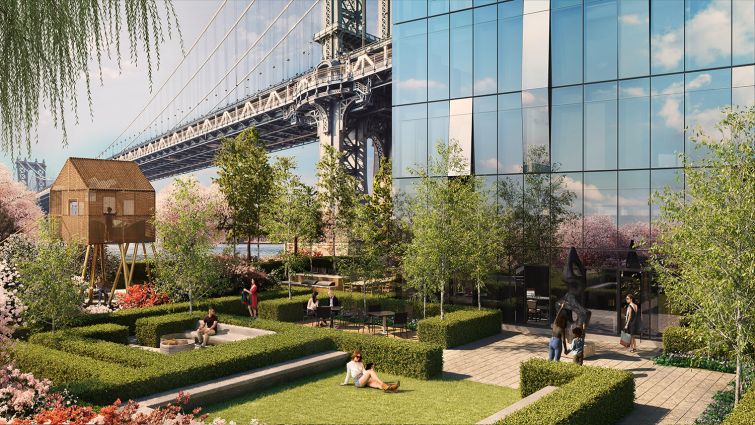 Ten years ago, Guns N’ Roses guitarist Richard Fortus said of Two Bridges, in which he owns a co-op unit, “It’s the only neighborhood left in Manhattan that doesn’t have a Starbucks.”

Not only is there still no Starbucks in Two Bridges, which lies between the Manhattan and Brooklyn Bridges from the East River to East Broadway, but there’s also no Duane Reade nor major supermarket since the Pathmark grocery store closed for good at the end of 2012.

Even grizzled New Yorkers don’t always know the name “Two Bridges.” It’s a Lower East Side- and Chinatown-straddling neighborhood dominated by affordable housing complexes and an immigrant population (today primarily from China and Latin America). The subway is audible as it rumbles over the Manhattan Bridge—but that same train doesn’t even stop in the neighborhood. (Only the F train does at East Broadway.) While the neighborhood feels like a throwback to 1980s New York City, with its century-old tenements, grit and dearth of retail, a number of developers are hoping if they build or renovate apartments in the area, the people (with money) will come.

“We’ll be bringing in 1,000 families,” said Gary Barnett of Extell Development Company with his One Manhattan Square development at 250 South Street. “It’s one of the best opportunities in New York City to get true great real estate value with a spectacular building with spectacular views.”

A pioneer in Two Bridges, Extell in 2013 acquired the former Pathmark site at 227 Cherry Street east of the Manhattan Bridge and is now building an 815-unit market-rate condominium tower and a 200-unit affordable housing rental building on the site. Barnett told Commercial Observer last week that he is working to “bring in a supermarket” as one of the retailers. Indeed, he has identified a 30,000-plus-square-foot space that could be home to the market. Extell’s affordable housing building is slated to be done at the end of 2017 or the first half of 2018, and the market-rate structure is set for completion in 2019. The sales center opened two weeks ago, Barnett said, and prices for the units—one- and two-bedrooms—range from $1 million to $3 million.

Barnett is no stranger to the neighborhood.

“I grew up there,” he told CO, “three blocks away [from the site I’m developing]. I was born at 1 Pike Street. It’s changed since when I grew up. It’s much more Chinese. Chinatown expanded in there. It’s now one of the safest precincts in the city of New York City—better than Soho, Tribeca, the Financial District.”

The neighborhood even smells different from Barnett’s younger days. “You don’t have the fish market smell—the Fulton Fish Market smell which I remember,” Barnett said. “It’s not there anymore.” (After 180 years, Fulton Fish Market relocated from South Street to the Bronx in 2005.)

Another developer with a big project in Two Bridges is JDS Development Group, which has plans for a 600-unit rental tower (150 of which will be affordable) at 247 Cherry Street (also known as 80 Rutgers Slip), next to Extell’s project.

L+M Development Partners and CIM Group are planning a 1,400-apartment residential and commercial complex (350 of which will be affordable homes) at 260 South Street, and Starrett Corporation is working on plans for a 60-story building at 271-283 South Street with 741 units, according to the Lo-Down. In addition, L+M is also working on two preservation projects in Two Bridges.

One of those projects is the 490-unit Lands End II at 265-275 Cherry Street, which L+M and CIM Group bought in 2013 for $279 million. The two 26-story buildings reportedly marked New York City’s first Section 8 project. While the federal subsidy contract expired a month after the companies bought Lands End II, they recognized the building was an important source of affordable housing in the community.

“Some might have seen that as opportunity to pull it out of the program, but we extended the Section 8 contract and entered into a 40-year agreement with the City of New York to preserve it,” said Eben Ellertson, who oversees acquisitions for the New York Affordable Housing Preservation Fund, a real estate private equity fund platform formed between L+M and Citi Community Capital.

The other L+M preservation deal is at Lands End I at 257-271 South Street, rebranded as 275 South Street. L+M and Nelson Management Group acquired the 19-story, 256-unit doorman building a little less than two years ago for $115 million, according to Robert Nelson of Nelson Management. The owners agreed to preserve the affordable units in the building for 40 years, Nelson said. Market-rate units in the building range from $2,500 a month to $5,000 per month for studios up to three-bedrooms. (The affordable units, in comparison, range from $770 to $2,065 a month.) Future amenities include access to a finished rooftop, a workspace and resident lounge, a state-of-the-art fitness center and a demo kitchen as well as on-site parking. Nelson noted that the units are great because of the light and the views. They are seeing interest in the units from young professionals and foreign students, Nelson said.

“What a great little oasis this neighborhood is,” Nelson said. “One of the things that appealed to us most is how can we provide moderately priced housing that is accessible to transportation. We’re not the type of owners who are looking to buy apartment buildings with rents of $8 to $10,000 a month.”

Not everyone is happy with the onslaught of development in the waterfront community that is seeing its most significant development in over a generation.

One of the signees was State Senator Daniel Squadron, whose district includes Two Bridges.

“I continue to oppose the current development proposals in the Two Bridges neighborhood,” Squadron said in a statement to CO. “Comprehensive coordination is critical, and impacted communities must be engaged. I’ll continue to work with [Community Board 3], colleagues and community members to ensure community voices are heard in this process.”

It’s still a matter of time before Two Bridges—which has been listed on the National Register of Historic Places since 2003—transitions as the new towers take time to rise and the esplanade remains undeveloped.

“It’s been a sleepy market for a long time because it wasn’t an area that was perceived to be attractive for high-end condo development,” said Michael DeCheser, a senior managing director in the Capital Markets Group of Cushman & Wakefield specializing in investment sales on the Lower East Side, and in Chinatown and Alphabet City. “The retail has been lagging behind the city, and the perception is it’s on the way up, but it’s not on the same trajectory as other areas of New York.”

Mei Ling Wong, a director in the Capital Markets Group at C&W and a member of DeCheser’s team, said of the area, “Lots of immigrants—they’d stay here. So there are lots of local stores. They have a local pharmacy. They stick to their own culture, their own people. Some people don’t even speak English.”

Downtown Music Gallery, a record store and performance space which five years ago The New York Times called “one of the last remaining Manhattan outposts of Downtown music,” has felt the impact of the stubbornly insular Asian population.

Since 2010, the neighborhood fixture has been below grade at 13 Monroe Street. Bruce Lee Gallanter, owner of the store, said he only settled on a lease in Two Bridges because, “I couldn’t afford rent anywhere else.” In the move from Bowery, Downtown Music Gallery lost much of its walk-in traffic. That combined with people purchasing fewer CDs and buying more digital music has killed his business, Gallanter said.

But investors are targeting the area “because it’s sort of the final frontier of rent-stabilized buildings,” DeCheser said.

“It’s like a pre-Soho area,” Nelson added. “It’s a neighborhood that doesn’t have Rite Aid, Duane Reade and all the big banks on the main thoroughfare. It has all these quaint bars and restaurants and all these quaint little galleries. It’s got a hip vibe to it.”

That vibe comes in large part because of the fact Two Bridges’ neighbors (the Lower East Side and Chinatown) have indisputably done well in the last few years. Essex Crossing, a planned mixed-use development with 1.9 million square feet of residential, commercial and community space in the heart of the Lower East Side is within walking distance (it’s also being co-developed by L+M). And South Street Seaport—where Howard Hughes Corporation is bringing 400,000 feet of retail space—is relatively nearby, just south of the Brooklyn Bridge.

According to DeCheser and his team, there has been an increase in activity from investors, renters and retail tenants seeking lower rents.

“You’re beholden to the F [train], but it is Manhattan, so when people are thinking of relative value, millennials are deciding whether they want to live in Murray Hill or the Far West Side of Manhattan. This comes up as an area where they can get more value. It’s attracting more and more people.”