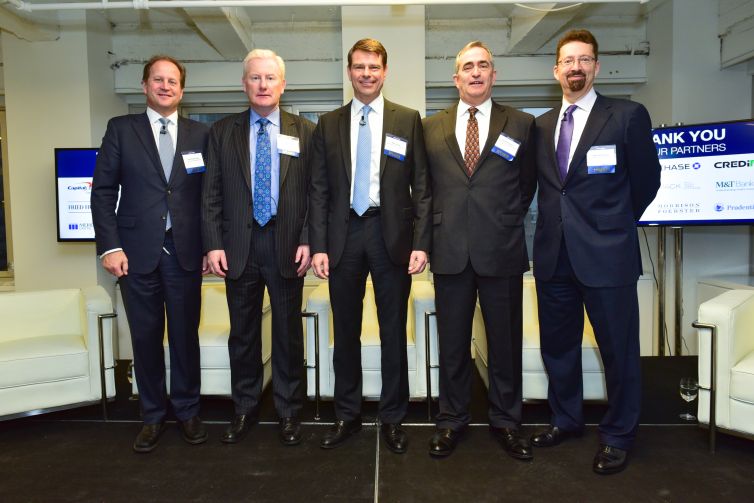 The last year has had its fair share of market tremors, from Brexit to the U.S. election. Industry experts from firms headquartered in Canada, Germany, the U.S. and China weighed in on how volatility is shaping their global lending patterns.

The general consensus among panelists was that that while the U.S. hasn’t lost any of its allure in terms of being a real estate investment haven, gateway cities are always preferred and banks the world over are keeping a close eye on the ever-increasing regulatory requirements.

Although the U.S. doesn’t currently represent the bulk of Industrial and Commercial Bank of China’s activities, accounting for only 0.5 percent of its portfolio, there’s “room to grow,” said Jerome Sanzo, the head of real estate finance at the Chinese bank. Landesbank Baden-Württemberg’s head of real estate finance, Alexander Joerg, said that his bank is also keen to expand its U.S. footprint. Less than 5 percent, or $5.5 billion, of LBBW’s balance sheet, is currently located in the country. Michael Higgins, head of U.S. real estate finance for Canadian Imperial Bank of Commerce likened the U.S. to Canada in terms of growth possibilities.

Gateway cities are still the flavor du jour when considering places to park capital, said panelists. David Durning, the president and chief executive officer of PGIM Real Estate Finance (the real estate investment business of Prudential Financial), said that the company made loans in 47 states last year but the firm’s portfolio is concentrated in  gateway cities.

Higgins agreed, saying “we go where the deal is, but focus on gateway cities for our balance sheet program.”

Sanzo said ICBC’s behemoth balance sheet plays a role in their need for scalability, and so primary markets make sense for the Chinese bank. “It’s hard to find this in secondary and tertiary markets, but we will follow our clients,” he said.

Durning noted the need for increased reporting but said the biggest challenge for PGIM is being able to lend in bigger markets. “We would like to invest more in France and Germany, but from a regulatory perspective it’s hard to cross borders,” he said.

Higgins described the changes within construction lending that he has witnessed as a result of the High Volatility Commercial Real Estate regulation in the Basel III capital requirements. “Borrowers are willing to put in more equity than I have ever seen in my career,” he said.

The commercial mortgage-backed securities risk retention implementation deadline is Dec. 24, but the requirement has some plumbing issues right now, said Durning. “There hasn’t been explicit guidance from regulators, as to what’s permitted and what’s not. CMBS will be more competitive when the kinks are ironed out.” Higgins said that risk retention will likely drive pricing up, as costs are inevitably passed through to customers.

Mezzanine financing has been a commonplace in the capital stack this year. Mezzanine lenders must be underwritten to the same standards as the borrower in a transaction, agreed panelists, because that lender may be required to jump in should things go belly-up. “We want to see mezz lenders with deep pockets and experience,” said Sanzo.

Not all mezz lenders are created equal, said Higgins. “We look at mezz lenders with the most experience, because we want them to take over the property if the borrower runs into issues,” adding that “we’re not looking for a loan-to-own lender, but one that can take over and manage a property.” He said that he would take preferred equity and mezzanine loans before a B-note.

As for A/B note structures in general, Joerg said that while the A/B note was often seen during the downturn, “it isn’t our preferred structure.” Sanzo, however, wouldn’t rule it out today. “It depends on what rank the B-note holder thinks they have,” he said.

Looking ahead to 2017, foreign influx of capital is set to continue and at least through next year, said Sanzo. In particular, hotels, for-sale housing and Class A office will be prized property types, but there is also interest in senior housing and multifamily, he said, referring specifically to Chinese investors.

The U.S. is seen as a safe haven for investment, agreed Joerg, especially the gateway cities, but as for the presidential election’s impact? “It’s too early to tell,” he said.

The new president’s impact on the market did not go entirely undiscussed. Should regulations such as Dodd-Frank Wall Street Reform and Consumer Protection Act be rolled back by Donald Trump, the market will experience some changes, said Higgins. “It will be more fluid and there will be cheaper pricing, which means we’ll see more activity,” he said. Durning agreed that the impact “should be positive.”

Only time will tell.