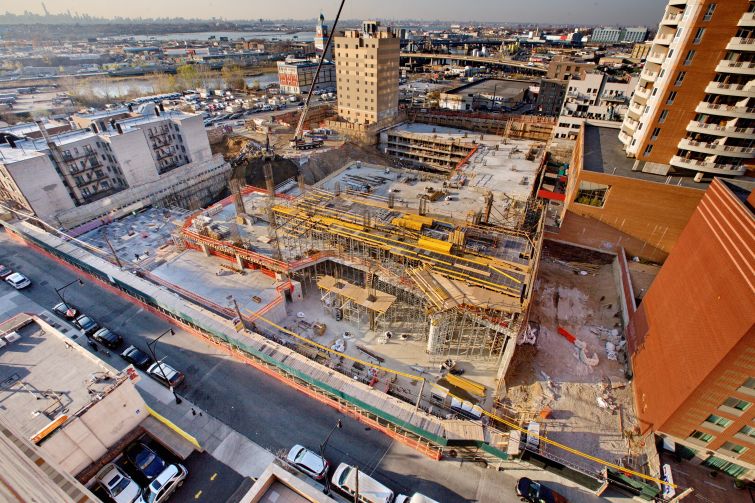 The development, called Tangram, is already under construction at 133-15 39th Avenue between College Boulevard and Prince Street, a site that was home to Flushing Mall until mid-2015. It will be comprised of four 15- or 16-story towers situated on top of a 225,000-square-foot, two-level retail podium. The buildings will house 300 luxury residential condominium units, 80,000 square feet of office space, a yet-to-be-decided hotel and a three-level parking garage with 1,200 parking spots.

“We are creating something that is very new for Flushing, and bringing in highly curated retail for an experience for people who are looking to experience a day in Flushing,” Geoff Bailey of SCG Retail, who has been tapped to lead a team to market the retail space, told CO.

The new 34,000-square-foot movie theater, which will become the only Downtown Flushing movie theater since the historic RKO Keith’s Theater shuttered in 1986, will be located on the first floor (technically the second level) of the two-story retail portion. Different configurations call for six to eight screens with seating for 500 to 800. SCG Retail is in discussions with “experiential” theaters that could include luxury dining, but Bailey declined to be specific. (Currently, locals head to College Point Multiplex Cinemas in Whitestone, Queens, one neighborhood to the north of Flushing, to catch a flick.)

“The [College Point] cinemas was a major concern because it’s very close, but all the theater groups [see] the density in Flushing and the need for a theater,” Bailey said.

There will also be a 24,000-square-foot food hall at the site with 15 to 30 vendors, depending on the balance of sit-down restaurants to stalls. The new food hall will pose competition to a popular Asian-themed food court in Flushing’s New World Mall.

“We feel that this food hall is an opportunity to bring the Flushing food experience to another level. It is a bit more than just the street food. It [will be] the chefs that are ushering new Asian concepts and other concepts to a new level—brand names, up-and-comers and local people who have strong reputations.” He later added: “The food hall at Tangram will be a much more curated and upscale experience unlike anything in Flushing currently.”

The retail podium will also feature as many as 30 shops in 1,500-square-foot to 5,000-square-foot spaces (and two that can accommodate 10,000 square feet to 15,000 square feet). Retail space at the new development has an asking price ranging from $150 per square foot to $200 per square foot. SCG Retail is targeting well-known brands like Coach, White House Black Market, Zara and Aritzia, but is hoping to bring retailers from the shopping districts of Shanghai, Hong Kong, Tokyo and Seoul.

On top of the planned hotel, F&T Group and SCG America expect to open a beer garden in 3,500 to 5,000 square feet, which will have views of Citi Field, the home of the New York Mets, the national tennis center and the Manhattan skyline.

Bailey described it as “Something to differentiate it from your typical hipster, Brooklyn-type beer garden.”

The retail portion of Tangram is expected to open in mid-2018. Margulies Hoelzli Architecture is the architect of record and designed Tangram, but still declined to share renderings per an F&T Group spokeswoman. BHDM is working on the interior retail designs.

SCG Retail is kicking off marketing for the retail portion of the project on Monday at the International Council of Shopping Centers’ event at the Jacob K. Javits Convention Center.

F&T Group, which is partnering with The Rockefeller Group and AECOM, on the 1.8-million square-foot mixed-use megaproject Flushing Commons, did not return a request for comment via a spokeswoman. A spokeswoman for SCG America did not return an inquiry seeking comment on Tangram.