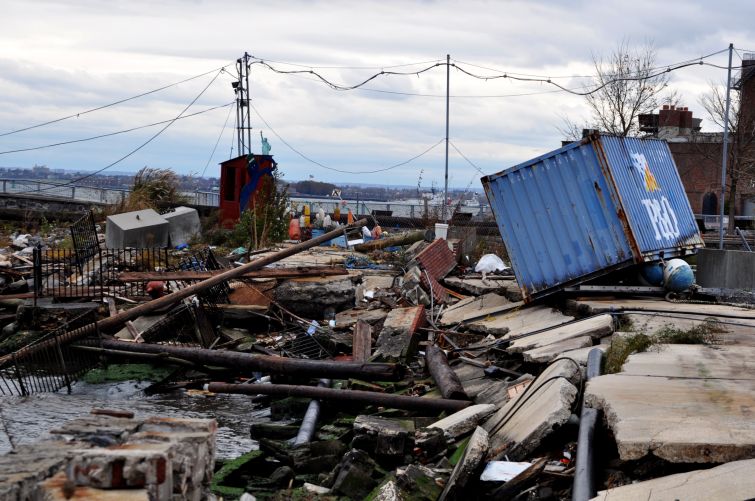 Squabbling is going strong at City Hall over efforts to allocate funds for the Build It Back program for homeowners devastated by Sandy. Photo: Michael Fleshman/flickr

Nine days ahead of the fourth anniversary of Superstorm Sandy, City Council members voiced anger that Mayor Bill de Blasio allocated $500 million to the $1.7 billion Build It Back program for homeowners without consulting them—and that the city won’t meet the deadline it set for the program’s completion.

Last week, the mayor allotted taxpayer funds without a council vote to fill a shortfall in the program then-Mayor Michael Bloomberg established to assist homeowners following 2012’s storm, as reported by The Wall Street Journal.

“As we learned the morning of our last hearing, through an article in The Wall Street Journal, the Build It Back single-family program is over budget by nearly a third more money than t he initial $1.7 billion allocated for its completion,” said Councilman Mark Treyger, the committee’s chairman. “For an administration that prides itself on transparency, the cavalier disregard shown to this body’s oversight authority was truly shameful.”

Treyger also said when officials initially communicated with the U.S. Department of Housing and Urban Development the budget was supposed to cover 22,000 applicants—far more than have actually gotten a check or been approved for one.

“That’s $2.2 billion to serve a total of 8,500 applicants,” he said to Commercial Observer. “So clearly, we are spending more than originally anticipated and only helping and assisting under half of the original applicant pool. How do you reconcile that?”

Early last week, the Mayor’s Office of Housing Recovery Operations released a progress report in which it says that 7,173 applicants—or 84 percent—have seen a check or construction, and that by the end of the year, more than 90 percent of program participants will have received checks or commenced construction.

The mayor admitted the city will fail to achieve its goal of completing all single-family Build It Back homes by the end of this year, blaming it on “the tangle of bureaucracy” that made it “virtually impossible to get a shovel in the ground.”

“We will fall short of that goal, for which my team and I take personal responsibility,” de Blasio wrote in the letter. “While Build It Back’s single-family program will not be completed by the end of this year, we’re getting closer to our goal every passing day.”

De Blasio said for single-family homes where the city is managing construction—which make up the majority of Build It Back homes—nearly all will be ready to start construction, 90 percent will have started construction and roughly 75 percent will be complete by the end of 2016.

John Grathwol, the deputy director of budget resources, workforce and accounting at the Mayor’s Office of Management and Budget, and Amy Peterson, the director of the Mayor’s Office of Housing Recovery, testified before the committee. The two admitted that the city should have been more forthcoming about the problems with Build It Back and that the model they adopted was not the right one to use. They said they would work to determine why half of the original Build It Back applicants dropped out of the program, with help from City University of New York researchers.

They also said the mayor would provide an update on the completion date in November and that there is a temporary rental program for homeowners who have to leave their homes during construction.

“We failed you and we failed ourselves,” Grathwol said, offering an apology for the lack of communication and outreach.

And while they said there are additional acquisition incentives of up to $150,000 for homeowners who face the longest and most costly rebuild circumstances—bringing the total available incentive to $650,000—members said they should have done a better job of advertising the incentive.

Queens Councilman Eric Ulrich—whose district has the most Build It Back applicants who are also still awaiting assistance—said he was disappointed by the way the administration handled the situation.

“I honestly don’t know how you can sit here with a straight face after blowing billions of dollars and ask the City Council for more money when you can’t even meet your own deadlines that the mayor set forth,” said Ulrich, a Republican publicly weighing a run against de Blasio next year.

After last week’s hearing, Peterson told reporters that there a number of challenges that come with doing both the elevation and rebuilding of homes and that the city is committed to completing the program and assessing how it is coming along.

“The mayor set an aggressive deadline to complete this program,” Peterson said. “Our priority is to get these homeowners help. This program is incredibly challenging. It is not the type of program that probably should have been started, and it’s not what we’ll do in the future.”

Robin Levine, a spokeswoman for Council Speaker Melissa Mark-Viverito, said the program needs to be reexamined.

“The program simply needs to run better, period. In addition, the administration cannot shift funds without notifying the council and we will be providing oversight on this, as well as the capital budget in the coming weeks and months,” Levine said in a statement to CO.

A version of this story originally ran in the Observer.