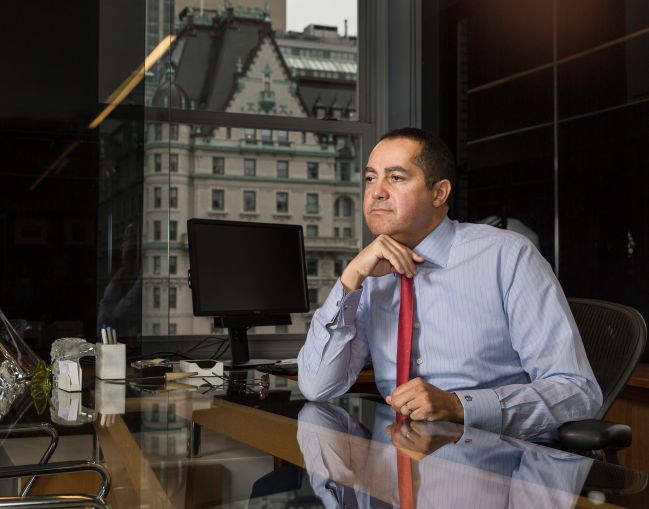 At the end of last month, Gov. Andrew Cuomo announced who would be awarded one of the sweetest plums in development that the state had to offer: the redevelopment of the James A. Farley Post Office (a.k.a. Moynihan Train Hall) on the West Side of Manhattan.

The 1-million-square-foot project promises to be worth $1.6 billion. Just about any developer would jump at the opportunity.

If you ask R. Donahue Peebles, however, it might have been nice if the state hadn’t picked developers like Related Companies and Vornado Realty Trust (who received the contract)—and maybe given one of the women or minority-owned firms a shot. Or, at least, made them a minority partner on the project.

“There has not been one major real estate development project awarded by the state to a minority developer in Gov. Cuomo’s tenure in office, and there have been opportunities to do so,” Peebles, who founded the Peebles Corporation (and who did not bid on the project), told Commercial Observer.

What might even be more galling is the fact that this is Vornado and Related’s second chance at Moynihan Train Hall.

The two developers originally won the right to develop office and retail space at the site a decade ago but have been stuck in a holding pattern ever since.

“For Moynihan Station, [the state] went with Related and Vornado—the same people that have had the property tied up for 10 years,” Peebles said. “Imagine that a minority firm hasn’t performed in 10 years. You think they’ll get back the project for a second time?”

This is one of the issues that the city, state and developers all struggle with. The big firms—which tend to be whiter, richer and much older—still get a lot of the breaks when it comes to the public development projects. This is despite the fact that the state has laws in place, which guarantee that a portion of their projects should be reserved for women- and minority-owned businesses.

The state’s Minority and Women-Owned Business Enterprise, or MWBE, program was founded in 1988 to promote diversity and is overseen by the Empire State Development Corporation. It certifies companies that are 51 percent owned and operated by minorities or women as eligible for the program. And, yes, they do guide work to these firms. However, the problem is that MWBE participants have gotten largely ancillary roles as subcontractors and consultants when it comes to the big projects.

The state recently gave itself a hearty pat on the back in an Oct. 6 press release from the governor’s office awarding $2 billion in contracts (not just in real estate) to minority- or women-owned businesses—25 percent of the nearly $8 billion it awarded from fiscal year 2015 through 2016. This is up from nearly $1.7 billion to MWBE firms from the prior fiscal year. The state awarded about $150 million in contracts for the redevelopment of LaGuardia Airport and more than $30 million for work on three of the state’s planned casino projects, to name a few assignments.

And one can point to a few other projects—more in the 100,000-square-foot range—that have gotten contracts through the program but usually in minority partner status. For instance, there is the 100,000-square-foot conversion of the Bayview Correctional Facility at 550 West 20th Street. The Goren Group, a women-owned business firm founded by Lela Goren, is the minority developer, with the NoVo Foundation as the primary developer (headed by Peter and Jennifer Buffet, Warren Buffet’s son and daughter-in-law, respectively).

This is not to say that there aren’t people at City Hall and in Albany who aren’t aware of the problem. The city has a separate law for MWBEs.

According to City Comptroller Scott Stringer’s office, of the $14 billion in contracts the city doled out last year, only 5.3 percent went to city-certified women-or minority-owned businesses. This is despite the fact that women make up 52 percent of New York City’s population and minorities account for roughly 60 percent of the city population, according to the 2014 American Community Survey.

A city spokesman contested Stringer’s figures. “Stringer’s 5 percent [figure] misrepresents our efforts,” the spokesman told CO. “His calculations include billions of dollars for areas inapplicable for MWBE participation, such as awards to nonprofits.” The spokesman said the number should be closer to 14.3 percent.

But almost in response to Stringer, Mayor Bill de Blasio announced a few days later, on Sept. 28, a goal to increase the dollar amount of city contracts to 30 percent by 2021.

Naturally, plenty of people in the MWBE program were extremely pleased with the mayor’s announcement.

“I have two sisters, both own companies, and it was a very big struggle for them,” said Paul O’Rourke, the chief operating officer of general contractor E.W. Howell. “Times change, the mandate comes out, and you have to change with the times. If that means hiring someone and taking a couple of dollars out of your pocket, then so be it. I think the capacity is a challenge, but it is achievable.”

Other MWBE advocates were unconvinced by de Blasio’s promises.

“I applaud the mayor for reorganizing the agencies responsible for administering the city’s MWBE programs by consolidating the responsibility under one deputy mayor,” said Louis Coletti, the president and CEO of Building Trades Employers’ Association. “We need to find a way to ensure that the city can achieve these goals, but at this point I’m skeptical that 30 percent is achievable.”

Coletti further explained: “The MWBE certification process isn’t working for anyone. It isn’t working for the MWBE community because their assumption is that when they get certified by the city, it’s going to lead to contract awards, and that hasn’t been the case.”

Indeed, the hoops the minority- and women-owned businesses have to go through to get MWBE certification oftentimes make it seem not worth the effort.

“I’d rather be chasing opportunities that no one else is looking at,” said Heidi Burkhart, the founder of eight-year-old affordable housing brokerage and consulting firm Dane Real Estate when asked why she didn’t pursue the certification. “The time and energy put into it doesn’t make much sense to me.”

And while a lot of firms claim they want to work with MWBE-certified businesses, they often fail to put in the effort to really track them down.

When Barbara Kavovit—the owner of Evergreen Construction, who recently got certified—began talking to CBRE and the Metropolitan Transportation Authority about possible work it was because of her connections, not the other way around.

“They didn’t go through the state directory to find me,” Kavovit said. “You don’t just sit there and wait for the state to call you. You get your certification, and you market it the best way you know how.”

A glitch in the state’s MWBE program is that it makes things easier for women- and minority-owned firms in their infancy but prohibits companies from growing; there is a personal net worth cap of $3.5 million for their founders.

“The first time they have any kind of success they are kicked out,” said Peebles, who is worth $700 million, according to Forbes. His company is working on about $4 billion in development around the country, Peebles said.

But this is not to say there haven’t been extremely notable success stories, due in part to the program.

Jodi Pulice, the founder and president of brokerage JRT Realty Group, counts marketing and leasing 1 World Trade Center for the Port Authority of New York & New Jersey among her biggest achievements. Pulice, who has partnered with Cushman & Wakefield since 2003, worked with the global company on the tower since it required some MWBE participation.

“[The certifications have] differentiated us and whenever you are different in any industry there is always an attraction,” Pulice said. “We happen to be completely professional and good at what we do. But a lot of times early on we didn’t have the opportunity to show how good we were. This brought us to the table and allowed us to compete.”

And Michelle Ryckman, the president and founder of the 15-employee firm Insight Civil Engineering, started her company five years ago and, shortly after, registered with the state and city as a woman-owned business.

Now her firm is the subcontractor working on the engineering plans for de Blasio’s citywide ferry system. They have worked with the landscape architects to connect the 15 new landing docks to electrical conduits around the city that will be implemented with the current ferry ways.

“We would not be where we are without it,” Ryckman said. “It really has been the catalyst to our engineering firm growing.”

“To be quite frank, I hope some day women in business don’t even need this,” Pulice said. “But if it’s the starting block that we have to use, then I am more than willing to do it for everyone that comes after me. But hopefully someday there is no such thing as an MWBE certification process.”

In the meantime, the smart firms are using the program to the fullest extent they can.

“The construction industry, it’s like the Flintstones,” Kavovit said. “It’s a breath of fresh air to see a women on the job site. I think it’s very welcomed by people that want to learn that there is an option.”