David Levy on Adams & Co. and How the Firm Has Kept the Garment District an Apparel Haven 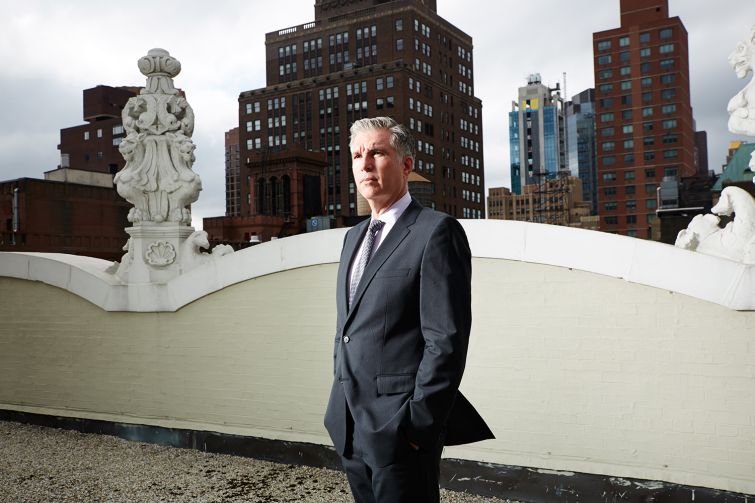 In the 1990s, David Levy and James Buslik were running a small Manhattan brokerage when a landlord with whom they had a good relationship called them to his office. He wanted them to take over the firm, Adams & Co., in the coming years.

It was the Thursday before Memorial Day, the 49-year-old Levy recounted.

Before the weekend was out, the best laid plans of Levy and Buslik would go awry (more on that in a minute).

But, it would seem, fate was determined to see the marriage through. Levy and Buslik merged their firm with Adams & Co. in 1999, taking over a 21-building portfolio mostly in Midtown and Midtown South.

Levy, a principal at the firm, wears many hats in his day-to-day role at the 96-year-old company. While it controls a vast empire in the Garment District, Adams & Co. also does third-party leasing for 12 other properties and represents tenants all over the city.

In 2014, he worked on a deal for a subsidiary of watchmaker E. Gluck to occupy an old manufacturing plant in Little Neck, Queens. Levy, a married father of two sons who grew up and still lives in Nassau County, shed a little insight for Commercial Observer on this deal and what life is like at Adams & Co. at the firm’s offices at 411 Fifth Avenue between East 37th and East 38th Streets a couple of months ago.

Commercial Observer: Where were you before joining Adams & Co.?

Levy: [I was at] a very small brokerage company called “James Buslik and Associates.” We started as we left Helmsley-Spear in 1990.

Can you run us through leaving Helmsley-Spear, starting your company and then buying Adams?

We should go back to the beginning. In 1988, I was in my senior year in college. One of the owners of the camp that I had gone to for the past 13 years had passed away. The other owner called me up in my room and said, “Hey, Irv has passed away, and I really could use you this summer.”

I said, “Burt, I’m graduating college. I don’t think my parents are going to want me to spend two months up at summer camp.”

He said, “I understand that, but I really could use you.”

I went up to camp. In my division was a kid named Jeff Buslik [James’ son and now a broker at the company]. He was a nice kid; I really didn’t think much about him.

In October, I get a call in my house, where I’m living with my parents. And I was trying to figure out what I was going to do. [Jeff’s mother] said it’s Jeffrey’s last soccer game. “Jim is out of town, and he would love for you to come. Would you come?”

I went to his soccer game. We had lunch at a pizza place. She said, “What are you doing with yourself?” I said I wasn’t really sure. She said, “You should call Jim. He’s the vice president of Helmsley-Spear.” I called Jim. He interviewed me. That was it.

He calls me up [again] in January. I went to work for him [after that].

We worked together for a year and a half at Helmsley-Spear. Things are breaking up there. It’s time to go; we leave. We just started doing our own thing. One of the things I was doing was renting a lot of space in the Adams buildings for whatever reason—just as a broker.

One of the main people I built a relationship with was Marty Roaman who was one of the owners of 463 Seventh Avenue and was located in the Adams office—he passed away in 2008.

Every so often Jim and I would come up here. We’d sit with Marty and Sidney Perlman, who was Sam Field’s son-in-law [Field was one of the founders of Adams & Co.] and say, “What more can we do? We want to do more. You have no plan for succession here.”

Fantastic. On Sunday, he passed away. We didn’t really know what to do. But we go to the funeral. At the funeral Sidney’s widow, Claire, came up to us and said, “I know what Sidney had in mind. Give me some time, and we’ll work it out.”

And here we are. She was true to her word.

Today, what do you personally focus on?

I’m doing the leasing of our properties, managing the brokers out there and the asset management of the buildings we control.

Run us through some of the buildings you own as well as your third-party assignments.

Our buildings are from 18th to 41st Street, but we do tenant rep business all over the city.

On what avenues are your buildings?

We have one building between First and Second Avenues on East 34th Street that’s a medical building. Then the rest of our buildings go as west as Eighth Avenue.

Do you do more leasing in buildings that you control?

I personally do most leasing in buildings that I control. Of course, I do some tenant rep and transactions that interest me—things that I get excited about—but mostly I work on it with the guys out there. They run those transactions and I just oversee them.

What are the kinds of tenant rep deals that interest you?

It’s mostly friends or clients that I’ve had for a long time. I did a lease in Little Neck, Queens, for 233,000 square feet a year and a half ago that was interesting, exciting and different. We worked at getting grant money and things like that. So that was a more interesting project.

What was the property?

It was the old Leviton plant on Little Neck Parkway, across from the Sam Field Y. Did you know that the Sam Field Y is named for Sam Field, who founded Adams & Co. in 1920?

I did not realize that.

And his grandson, John Perlman, is still our partner today. He started this company in 1920, founded the Y in Little Neck and right across the street was the Leviton plant that we rented to a watch company. It was pretty exciting.

So they’re building a new facility?

What they really did was re-skin the existing Leviton building and built on to it in two different areas. So it will be bigger and obviously a lot more modern.

E. Gluck is the parent company. Armitron is the brand.

How much is Adams & Co. doing in terms of its own leasing versus tenant rep?

You have a lot of buildings in the Garment District. There’s been so much discussion of what to do with the area and its zoning. Who are the companies coming in?

Then we have some buildings that are out of the zone that we are keeping as industry buildings: 10 West 33rd Street is all accessory people. Handbags, belts, scarfs, hats, watches, jewelry. Thirty-four West 33rd Street, just down the block from that building, is all children’s wear tenants, and we’re keeping it that way for multiple reasons.

What are some of those reasons?

The main reason is those two buildings are kind of irregularly shaped. They don’t really lay out that well for office product. We think the highest and best use is [showroom].

Also, we’re very, very conservative. We don’t make the most money. We never make the least money. And we’re kind of “slow and steady wins the race” type of philosophy.

Going back to 10 West 34th Street, you guys call it the Accessory Building. How did it become that?

When we bought the business in 1999, we looked at what the highest and best use was for each building. It seemed to me that that building was never going to be a great office building. It’s shaped almost like a U—it’s got these two long tails that are kind of awkward. It seemed like the best way would be to create a demand for the building, [a feeling of] If I’m in the accessory business, I want to be in that building. That’s what we did.

They’re not always the biggest names, just the people who are supplying the big names. Is that what you try to go for?

No, that kind of just evolved. For whatever reason getting the luxury brands to getting 33rd Street is not that easy. We’ve been very lucky in getting a lot of accessory tenants but not the high-end luxury brands. Like the mid-tier or lower.

Are you considering doing something similar—as in all apparel—with any other of your buildings?

We have [three]: Accessory Building, Children’s Wear Building and we have a Contemporary Sportswear Building on West 39th Street between Seventh and Eighth Avenues.

Short of that, not really. First of all it takes a real dedication on the owners of the buildings’ part to turn down an office tenant and say, “Sorry I can’t rent to you, Mr. Architect. Because I only will rent to accessory tenants.” It takes a lot of discipline and a lot of patience.

We experimented with home goods—sheets, towels and blankets, stuff like that—in a building, 11 East 26th Street. We thought that was going to be successful…but of course Madison Square Park is so hot and that industry is not.

Now that Midtown South has become so hot, how beneficial is it for you guys to have buildings in the area?

What kinds of tenants are you renting to?

We rented 50,000 square feet to a company called Taboola at 1115 Broadway; Ford Models and Hewlett-Packard at 11 East 26th Street. Getting high-end, good tenants is the key for us.

How long have you had those two buildings?

How long have they been in the Adams portfolio? Since the 1940s and 1950s. Like I said, we have a long-term perspective on everything.

Do you have any plan to sell any of these any time soon?

There is no intention of selling these buildings.

Does the company do acquisitions, too, or is it just manning the fleet?

It’s mostly manning the fleet that we have. It’s taking on third-party management and leasing, also. And doing some investing in properties, but not necessarily in Manhattan, either.

On average, how many leases do you guys do every year?

I knew that question was coming, so I looked it up. Over the last five years we’ve averaged 277 deals per year.

Since you’ve taken over the company, what’s been one of the most challenging periods?

People view us as just building owners—they don’t view us as brokers. So that’s a challenge to make sure that our reputation is that we’re a full-service real estate company, including brokerage. Not just the owners of the building.

Are you ever met with skepticism when you’re doing tenant rep and also representing one of your buildings?

How do you reassure a tenant that you have their best interests at heart?

I think it really depends on the tenant and how comfortable they are with you. We’re very, very, very hands on. I know most of my tenants. We have 2,200 tenants, something like that. I have a very good personal relationship with them.

As far as tenants walking in off the street: It happens. That doesn’t happen as often as it used to; it happens mostly in the specialty buildings. They know where they want to be—they don’t really need the broker.