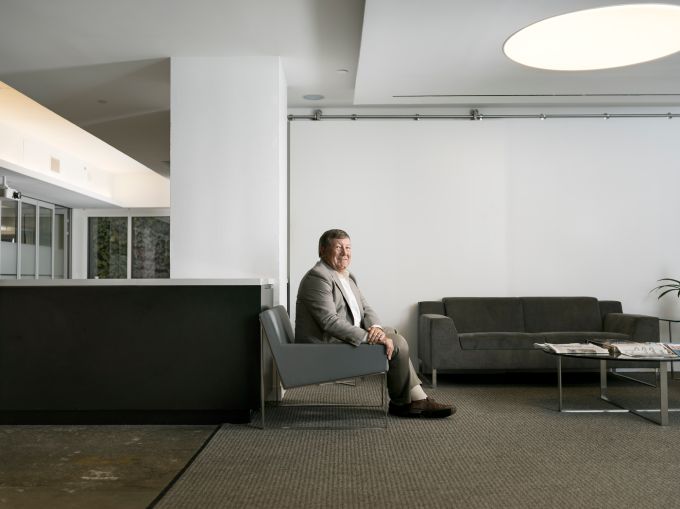 After learning that two planes hit the World Trade Center, William Sandbrook ran to watch the towers fall from a rock quarry in distant West Nyack, N.Y., on the Hudson River.

That night Sandbrook, who was then the president and chief executive officer of Tilcon New York, began calling the offices of local officials, including then Mayor Rudolph Giuliani and then Gov. George Pataki, to see if his company could help with the cleanup. (Tilcon sells construction aggregates, which are rock, gravel and crushed stones used to make concrete and asphalt.)

On the day after 9/11, Sandbrook and his workers brought 100 loaders and trucks to remove rubble and help with search and recovery. Sandbrook slept on-site in his truck and his workers came back for the next three days (he didn’t bill the city).

Today, he’s working at the same site—but in a different capacity.

“I was there when it all came down, and now we’re here to rebuild them,” said Sandbrook, 59, who has since switched jobs and is the president and chief executive officer of Texas-based U.S. Concrete. “It’s interesting because I helped clean it up and now we have supplied the concrete in Tower 1 and most of those buildings.” (His firm also provided concrete for 3 and 4 WTC—and it is slated to work on 2 WTC, whose fate is uncertain.)

U.S. Concrete, which is publicly listed with the Nasdaq, has been thriving in New York City (although Sandbrook lives in Texas); the company is now responsible for providing concrete to developments such as Related Companies’ Hudson Yards complex; Brookfield Property Partners’ Manhattan West project; and BFC Partners’ Empire Outlets in Staten Island. In addition, the company is involved in public efforts including the revitalization of LaGuardia Airport, construction on the Tappan Zee Bridge and building of the Second Avenue subway.

Well aware of Gotham’s construction boom, the nearly 20-year-old U.S. Concrete has absorbed half a dozen concrete firms in the five boroughs within the last two years. (The New York Building Congress projected this year would result in $41 billion spent on construction projects in New York City, up from $39 billion in 2015 and $35.4 billion in 2014.)

And with these acquisitions, U.S. Concrete is responsible for supplying concrete to build a majority of the largest projects in the city, putting the company at the top of the industry.

It has some 2,700 employees around the country and its major markets are San Francisco, Dallas and Washington, D.C. U.S. Concrete has 148 concrete plants and more than 1,500 ready-mix concrete trucks, and publicly reported its revenue increased 25.2 percent within the first six months of 2016 to $520.8 million from $416 million during the same period last year.  The concrete industry generates about $28 billion worldwide, with 2,037 companies and 6,500 concrete plants, according to research firm IBISWorld.

The common denominator among all of the companies U.S. Concrete bought in New York is that “they’re all Italian families,” Sandbrook joked. (Although, it was only half a joke—they did happen to be mostly Italian-American family businesses.)

“All the guys we’re buying right now were customers of mine when I was [at Tilcon] selling them aggregates,” Sandbrook said.

Most recently on Aug. 22, U.S. Concrete picked up Brooklyn-based Kings Ready Mix, a 30-year-old firm, which has a fleet of 62 concrete mixers and four plants.

New York City now accounts for about 30 percent of U.S. Concrete’s revenue, which was $704 million in 2014, and grew to $975 million the following year, according to public filings. The company has made over $1 billion during the year ending June 30.

“I [believe] very strongly in what Bill Sandbrook is doing and that is why I joined his team,” said Michael Falcone, a co-founder of Kings Ready Mix and its former treasurer. “I think I approached them before they approached me. I’m 75 and my partner is 73. [We] wanted to take a step back and enjoy life. We could have gone on, but I saw what Mr. Sandbrook did with Ferrara [Bros.], and I said why not?”

“Bill is great. He is super smart, and he is a visionary,” said Joseph Ferrara, the vice president of third-generation Ferrara Bros. (who is not the same as Joseph Ferrara, the principal of developer BFC Partners). “He has done a great job with U.S. Concrete. He shed nonperforming sectors and businesses and built a powerful, growing business. He doesn’t let grass grow under his feet.”

Sandbrook had heard that Ferrara Bros. was looking to sell and reached out. An August 2014 breakfast led to a deal the following year, said Ferrara, who with his son decided to stay on with the company, which still uses the Ferrara Bros. name in New York City and New Jersey.

“Our interests aligned, and he had known our family and our business and our reputation for many years,” Ferrara explained. “What we liked about [selling] was that we had grow to a size that we needed to be more corporate. And it is nice to have a board and a much bigger balance sheet.”

U.S. Concrete also bought the 25-year-old Jenna Concrete Corp., which is based in the Bronx, this Aug. 10. It has 52 concrete mixing trucks and two plants. Jenna provided ready-mix concrete to build Yankee Stadium and expansions to the Robert F. Kennedy Bridge (formerly the Triborough Bridge).

In June, U.S. Concrete acquired Queens-based NYCON Supply Corp. and four months earlier picked up Greco Brothers Concrete of L.I. from Brooklyn. Each has two plants and 38 and 37 trucks, respectively. And in 2014 U.S. Concrete bought Diamond Concrete in Staten Island.

For anyone with his sights set on New York, absorbing an existing concrete business is much easier than starting new plants because of high land costs, Sandbrook said. Thankfully, many family-owned construction companies are receptive.

“Family businesses are selling because of the difficulty of doing business in this [industry]—the neighborhood complaints, the environmental issues, the traffic congestion and the unions. People don’t want to deal with unions,” Sandbrook said. “And then you have all the regulations—all the stuff with Obamacare and taxes. It’s just difficult to be a small business. And it’s risky.”

U.S. Concrete has seen its stock price rise to the high $40s in September from around $4 in September 2011, when Sandbrook took over the company.

Sandbrook graduated from the United States Military Academy at West Point in 1979 and spent 13 years in the army (he was a one-time aide to former President Ronald Reagan). While in the army, he earned four master’s degrees, including an MBA from Wharton School of the University of Pennsylvania and a master of science in systems engineering from Penn, as well. He started his career in the construction field working as an executive vice president at Tilcon.

Sandbrook rose to president and chief executive officer in 1995, and the following year Oldcastle Materials, the North American arm of Ireland-based building materials giant CRH, acquired Tilcon. He became the head of the western division of Oldcastle’s business in 2003, before being promoted to the head of Oldcastle Architectural in 2006, responsible for the group’s U.S., Canada and South America operations. He oversaw 7,000 employees and annual revenues of $2.1 billion in 2007.

In 2008, he was tapped to be the CEO of Oldcastle’s Americas Products & Distribution, a position which made him responsible for all architectural products and precast, glass, metal and distributions businesses. The firm had revenues of $7 billion that year and more than 25,000 employees.

In 2011, Sandbrook, decided to jump at the chance to take over U.S. Concrete as it was searching for a new leader. The company was financially reeling at the time; the previous year, the company had declared bankruptcy and had nearly $400 million in debt and reported assets of $389.2 million, according to Reuters. Many business professionals might have seen it as a losing proposition, Sandbrook saw an opportunity. He took a 25 percent pay cut in guaranteed salary for the new job and received a 5 percent equity in U.S. Concrete. Plus, he figured he didn’t want to say “what if” for the rest of his life.

“I was one of the top five operating guys in this worldwide company [CRH]. But at 54 years old, I was never going to be the CEO of CRH,” Sandbrook , a divorced father of one (and grandfather of one), said. “It’s headquartered in Ireland. In our industry, there are a lot of [international] companies where the CEO will always be from the country where it is domiciled. So you have to resign yourself to ‘I’ll have a good career, and I’ll make good money, but I’ll never be the guy in charge.’ So if you want to be the guy in charge, you have to make a move, no matter how risky.”

As soon as he arrived at the new job, he realized that the company was too micromanaged—every last decision had to be run through Houston.

“Operating managers that know what they are doing and had been doing that job for 30 or 35 years and, at a very local level, tactical level, had to ask [accountants’] permission to fix things that were broken,” Sandbrook said. “But if the equipment didn’t run you couldn’t produce efficiently, so our costs were out of control.”

Sandbrook immediately allowed plant managers to autonomously make those necessary fixes to get the company’s plants running at full capacity again. And to further decentralize the company, Sandbrook moved the company’s headquarters from Houston to Euless, Texas, near Dallas.

“The founding CEO was from Houston, so that’s why it was headquartered there,” Sandbrook said. “But their closest operation was 200 miles north of that [in Dallas]. And three-quarters of the headquarters staff had never even been in a concrete plant. All the centralization meant that all of these concrete companies had to report to Houston to guys who didn’t really know the business.”

Before Sandbrook’s arrival, U.S. Concrete was involved in other businesses selling concrete-related products, namely precast concrete structures and concrete blocks. These are usually built in factories and put on trucks and delivered to clients, unlike ready-mix concrete, which is made on project sites and poured into structures.

“Concrete-related products allowed [U.S. Concrete] to go to Wall Street and say they had a bigger platform of product categories,” Sandbrook said. But it was a “lower [profit] margin, completely different production process than ready-mix concrete, different customer set, and there was no reason to be in it other than they were concrete-related products. Strategically, it made no sense, and we couldn’t afford it. So I had to sell those companies.”

Sandbrook did away with about five companies that sold precast concrete.

Having already acquired six businesses in New York City and becoming the top provider in the market, one might think that Sandbrook would be done with acquisitions. But, Sandbrook said he is still interested in buying more local companies, since New York City is in a building boom.

“We’re in part of the cycle that the amount of construction in New York in some of the sectors is unrivaled in the history of New York in total square footage under construction,” Sandbrook said. “So we needed to go to where people are buying our product. It’s basic. I want to structure our portfolio of companies where there is the most dynamic growth potential, both in the short and the long term.”