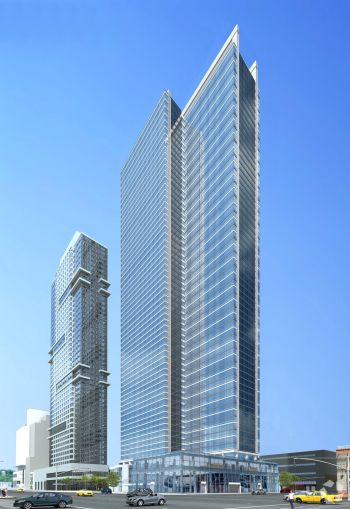 Volvo is taking a lot of vroom at The Moinian Group’s 605 West 42nd Street, the high-rise rental building also known as Sky.

The Swedish automaker is taking 60,000 square feet at the base of the 1,175-unit tower between 11th and 12th Avenues, according to The Real Deal. Volvo’s lease is for 15 years, according to TRD, but the asking rent was not immediately available.

Gregg Weisser, the head of commercial and retail leasing at The Moinian Group, confirmed the deal and said in a statement that it added to the top retail tenants the company had signed, such as Nordstrom’s 43,000-square-foot men’s store at 3 Columbus Circle and the NBA flagship store at 535-545 Fifth Avenue between East 44th and East 45th Streets.

“This space is perfect for Volvo’s needs and we wish them success in their first long-term lease deal in Manhattan,” Weisser said in a statement provided to Commercial Observer.

In total, Sky has 70,000 square feet of retail between the ground floor and lower level of the 60-story building, according to marketing materials for the building. With the Volvo lease the property has less than 10,000 square feet remaining at the street level, which can be divided up for multiple tenants.

Mark Kapnick of SRS Real Estate represented The Moinian Group, according to TRD, while Michael Kadosh of CBRE represented Volvo.

“With Manhattan’s Far West Side continuing to gain traction, we believed this was the perfect opportunity for Volvo,” Kadosh said in a statement to CO via a spokeswoman. “Sky is truly a magnificent luxury building which aligns very well with Volvo brand.”

Volvo currently has a dealership at Taconic Investment Partners’ 619 West 54th Street between 11th and 12th Avenues. A source familiar with the property said the dealership will leave the building as part of the new lease, making the property’s 20,500-square foot retail portion completely vacant.