Under Construction: A Look Inside the Renovation of 30 Broad Street in FiDi 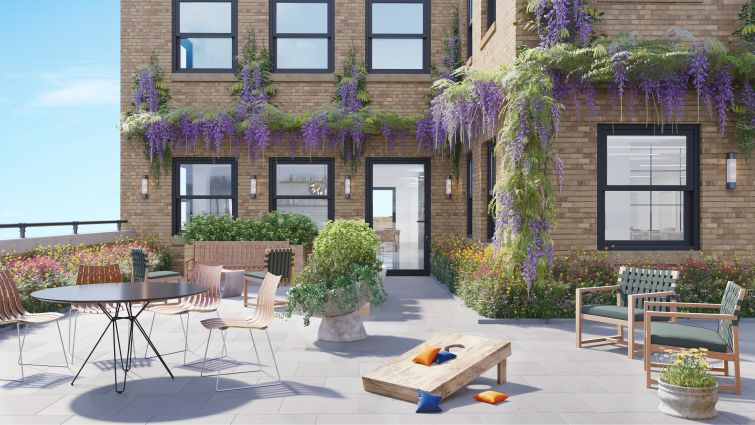 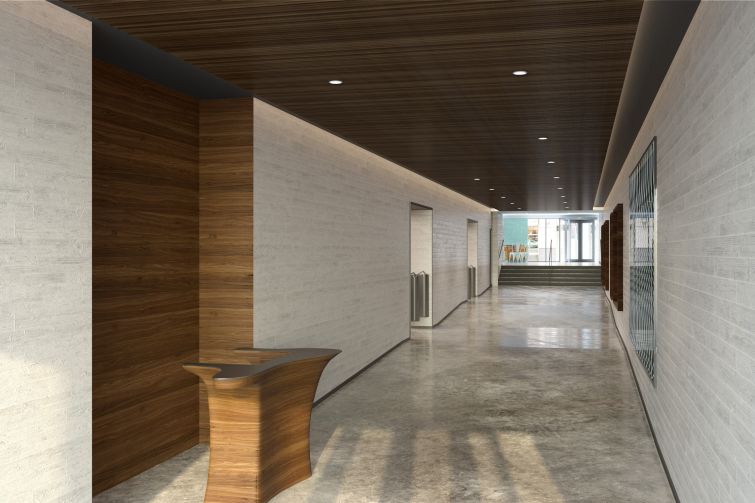 The renovated lobby with walnut ceilings and an interactive artwork on the wall. Rendering: Wordsearch River Film Liam La Guerre 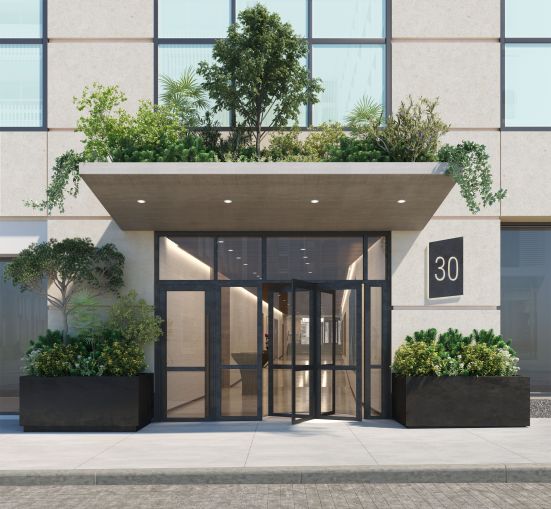 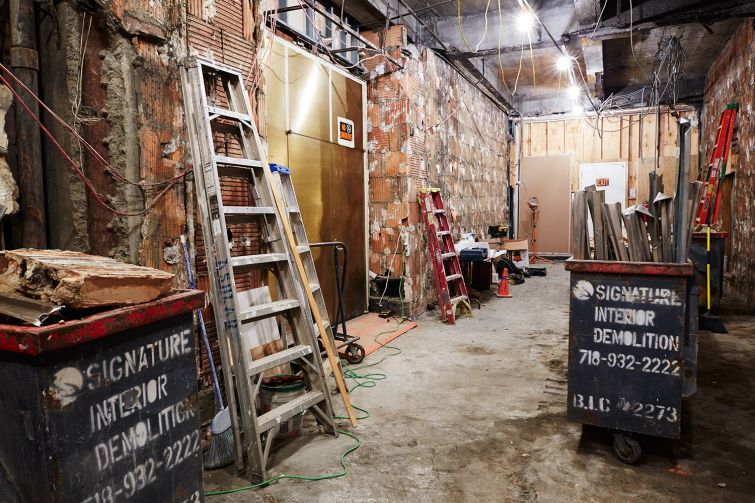 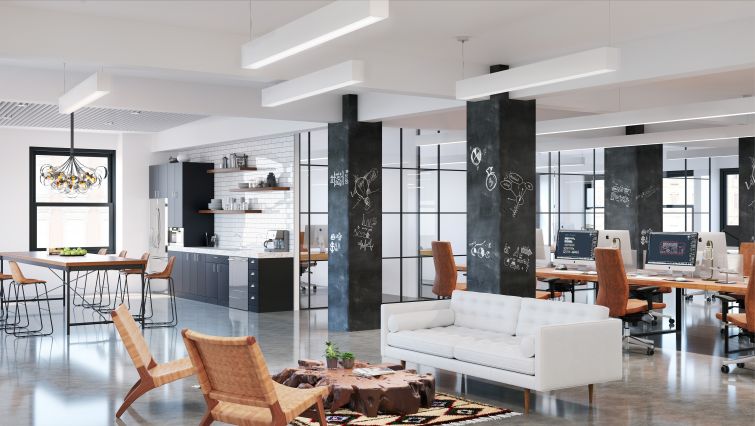 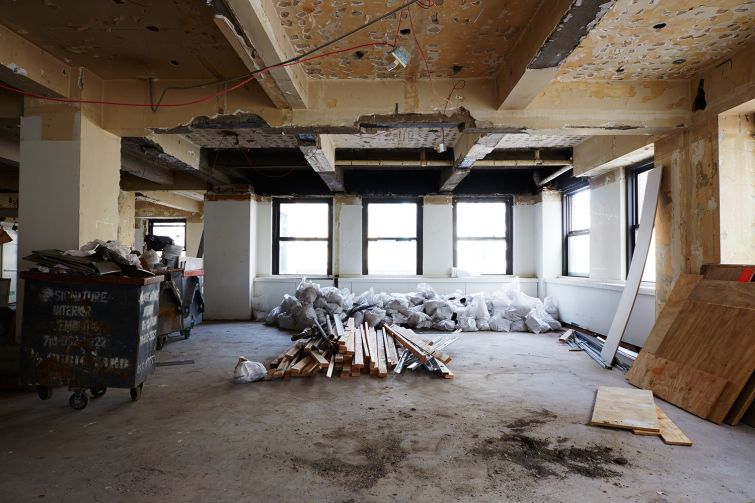 In today’s Financial District, there are fewer business suits and expensive neckties and more sneakers and polo shirts.

So when Tribeca Associates acquired a 99-year ground lease for 30 Broad Street in April for $130 million, the company knew it had to reposition the 47-story office tower to keep (and scoop up) the modern companies of FiDi 2016.

Within months, the developer (which has built various hotels in the city) started a more than $30 million renovation to transform the prewar building between Exchange Place and Beaver Street from stuffy, corporate offices to lofty spaces with amenities that are usually associated with Midtown South conversions.

“In developing hotels, like the Baccarat Hotel and the Smyth Hotel, we try to attract a certain audience and create a certain look, and we are trying to bring that hospitality experience that we have into the office space,” Bill Brodsky, a founder and managing partner at Tribeca Associates, told Commercial Observer during a tour of 30 Broad. “The product that we are developing is different than the normal FiDi renovation.”

Tribeca Associates has tapped architecture firm Montroy Andersen DeMarco and designer Jun Aizaki, the founder of Crème, to craft the amenities and offices.

Aizaki reimagined the lobby as a more inviting place, with brighter lights, white walls, walnut ceilings and a new canopy decorated with plants atop and around the entrance (a rare sight on Broad Street). The lobby will be extended straight through the building from Broad to New Street, and it will have an expanded café. The landlord also commissioned an interactive exhibit by artists Annica Cuppetelli and Cristobal Mendoza, which uses a motion sensor and a projection system to reflect guitar-like strings on the wall, which move when people walk past.

“What we wanted to do was create this sense of community where people would spend time and congregate,” Aizaki said. “So the lobby becomes a place of interest instead of being a transient place where people just come in and go to the elevator. But there is very little open space where people could gather. [So] what we came up with is this narrow space that has these moments of interest.”

Tribeca Associates is adding a game room on the eighth floor, which will feature an Xbox, a cappuccino machine, Apple TV, Wi-Fi and a Ping-Pong table.

Montroy Andersen DeMarco has designed modern pre-built office spaces with all the things millennials like: exposed ceilings, polished concrete floors, open-desk spaces, glassy conference rooms and private suites, and slimmer, artful columns. And some floors will have outdoor terraces made from the building’s setbacks, like the 7,615-square-foot 27th floor, which will be pre-built along with the eighth, 34th and 36th floors.

Of course, the renovation of the building isn’t exclusively to attract young, trendy companies. Tribeca Associates is also targeting law firms, nonprofits and financial services companies, which are looking to Lower Manhattan as a refuge to Midtown prices.

“We are looking for progressive type tenants that are being priced out of Midtown South and want to be located Downtown,” said Newmark Grubb Knight Frank Executive Managing Director Andrew Peretz, who is marketing the building with colleagues.

United Builders Group, the general contractor, has already demolished vacant upper floors, by ripping out drop ceilings and tearing down dividing walls. Workers have also demolished the Broad Street side of the lobby in preparation for the renovation. In addition to all the visual upgrades, Tribeca Associates plans to install new HVAC and electrical systems, and 12 new elevators.

The 470,000-square-foot building is currently about 85 percent leased. The renovation of the vacant offices will be completed by the end of the year and the lobby in January. NGKF is asking from the $50s per square foot to the low-$60s per square foot for office space.