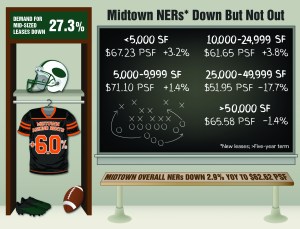 Today, the line between rooting for your favorite National Football League team and fantasy team can get confusing even to the most avid fan. In Week 1 of the NFL season, I was rooting for my New York Jets to defeat the Cincinnati Bengals, while also silently cheering for my top fantasy pick, Cincinnati’s A.J. Green, to score fantasy points. Similarly, understanding the pricing for Midtown office space can be daunting if not analyzed correctly.

Direct average asking rents in Midtown for all classes of space are up one touchdown, 6 percent to $82.62 per square foot year over year through August. On the flip side, net effective rents, or NERs, for new leases (with a minimum lease of five years) are down nearly a field goal, 2.9 percent, to $62.62 per square foot. Despite rising asking rents, average NERs dropped slightly as work allowances increased. This is partially due to an increase in $80-plus work letters issued on new leases—up 20.1 percent compared with only 16.3 percent one year ago. As an aside, in fantasy football last year, 20.1 and 16.3 yards per catch was the average of the top- and 10th-ranked receivers. But the 2.9 percent decline does not paint the whole picture.

Examining Midtown average NERs within size ranges uncovers different results. NERs on smaller leases signed this year actually increased but are down for leases greater than 25,000 square feet. Below are the 2016 year-to-date average NERs by size and the change versus one year ago through August:

It is no surprise the new leases signed for less than 10,000 square feet have the highest NERs, but midsized deals in the 25,000- to 49,999-square-foot range got sacked this year. Part of the decline is attributed to a 27.3 percent drop in demand for these spaces, as only 32 were signed this year compared with 44 one year ago. In addition, of the 32 leases, 35.7 percent of them were signed in the West Side and Murray Hill submarkets, which achieved the lowest NERs this year in this size range.

Although the overall change for Midtown NERs are down, as the market heads into the fourth quarter, there is still time for midsized deals to pick up the average.