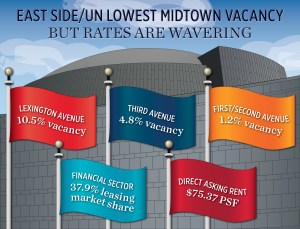 Last week, getting around Midtown was a chore, as Barack Obama was in town for the 71st United Nations General Assembly. As cars and pedestrians struggled to move up and down the avenues on the East Side and the blocked off streets, it made me think about the recent performance of the East Side–U.N. office submarket. This submarket is bordered by East 65th Street to the north, the East River to the east and to the west, Lexington Avenue south to East 47th Street and Second Avenue south to East 39th Street.

Despite the 100-basis-point vacancy increase from one year ago to 6.1 percent, the East Side–U.N.’s vacancy rate is the lowest of Midtown’s nine submarkets and fourth-lowest throughout Manhattan. Surprisingly, the vacancy rate drops along the avenues moving from west to east. The Lexington Avenue corridor has the highest vacancy rate in the East Side–U.N. submarket at 10.5 percent, due to five of the 16 buildings in the area with available spaces ranging from 60,000 to 150,000 square feet. Third Avenue is a much tighter corridor with a 4.8 percent vacancy rate, as only two of the 20 buildings have significant availabilities, but none greater than 90,000 square feet. Combining First and Second Avenues in this submarket only produces eight office properties totaling almost 1.8 million square feet. The lack of supply and demand from United Nations-related tenants keeps the vacancy rate low along these avenues at only 1.2 percent.

With overall direct asking rents averaging $75.37 per square foot, up 6.4 percent year-over-year through August, this submarket remains attractive to tenants due to pricing almost 9 percent below the Midtown average. Total leasing activity has been solid over the last 20 months, with over 3.2 million square feet leased or renewed. Lease renewals accounted for 42.4 percent of the activity during this time, higher than the Midtown percentage of 27.2 percent. Financial services firms accounted for the most activity, with 37.9 percent of the East Side–U.N. market share for leases greater than 10,000 square feet. Legal services and technology, advertising, media and information services round out the top three at 20.9 percent and 15.7 percent, respectively.

Fortunately for all these tenants, things should be back to normal this week as the traffic clears up with the closing of the general assembly.