Stat of the Week: 41 Percent 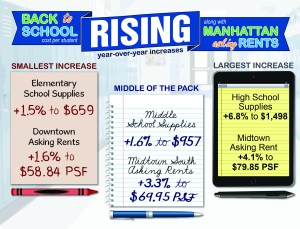 Back to school is officially underway in the New York City area, and as a father of two boys—one in eighth grade and one in fifth grade—the cost of school supplies and fees can be quite lofty this time of year. In fact, year over year, the cost to send your child to school is up for all three schooling levels—elementary, middle and high school—according to the Huntington Backpack Index. The higher the level of education, the higher the year-over-year increases are. Similar to school costs, overall average asking-rent year-over-year increases in the Manhattan office market are higher for the three major markets from south to north. So, let’s compare the grade levels with the Manhattan office markets for the first-ever Stat of the Week Back to School index.

As if the costs were not bad enough at the start of the year, I need to spring for a double-graduation party in June when my sons move forward into high school and middle school, so I better start saving. Maybe invest in some Midtown real estate? Hmm…