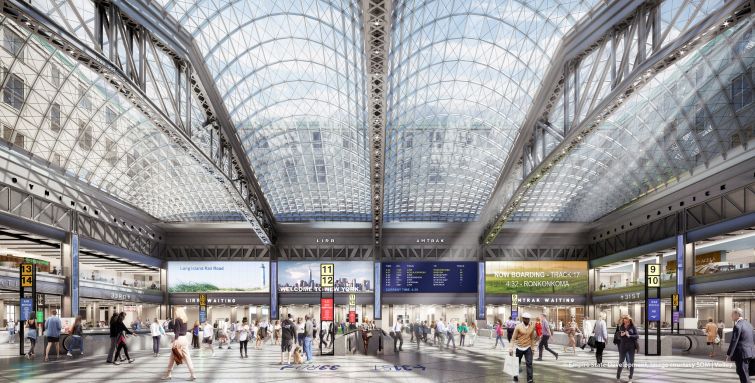 A rendering of the new Moynihan Station. Photo: SOM via flickr.com/governorandrewcuomo tcullen2015

Despite a multibillion-dollar bid-rigging scheme implicating some of his closest associates, Gov. Andrew Cuomo tried to shift the focus to an ambitious infrastructure program—a $1.6 billion plan to transform the historic James A. Farley Post Office into a world-class transportation hub that would entail revamping Pennsylvania Station, which he called the “train version” of LaGuardia Airport.

Cuomo announced the selection of a developer-builder team that includes three companies—Related Companies, Vornado Realty Trust and Skanska—to redevelop the Farley Building, creating the new, 250,000-square-foot Moynihan Station to house passenger facilities for the Long Island Rail Road and Amtrak. That train hall would also include 700,000 square feet of office and retail space.

Pre-construction work will start this fall, with the new train hall slated to be completed by December 2020. The LIRR concourses and the two subway stations in Penn Station will be rebuilt by the MTA. Empire State Development and Amtrak will partner on a request-for-proposal to rebuild the current Amtrak portion of Penn Station.