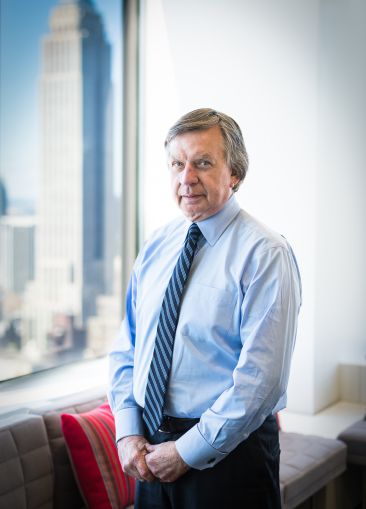 Kansas City, Mo.-based Polsinelli has grown to 20 offices across the U.S. with 800 lawyers, the real estate and financial services industry has drawn the law firm’s presence to New York City. Dan Flanigan, who joined in 1999 as the firm’s 97th lawyer, has very much been at the forefront of the effort, overseeing that practice (which has about 180 attorneys across the firm in total) out of both New York and Kansas City. He sat with Commercial Observer in Polsinelli’s offices at 600 Third Avenue and East 39th Street and talked about how he went from being a civil rights lawyer to working on major bankruptcies and representing some of the largest financial institutions and developers today.

Commercial Observer: How did you get your start as an attorney?

Flanigan: In 1969, I was in my last year of college and I had no idea what I was going to do except that I had a very low draft number and the Vietnam War was raging. I took a course in American Constitutional history and I turned in a paper. I remember thinking, “This is the worst paper. I hate this thing. It’s going to be terrible.” And I got it back and my teacher had written, “This is the best paper I have ever received from an undergraduate.” There was an “A+” on it. “If you would like a fellowship to Rice University, I’ll get it for you.”

So I did that. I went down there to just do graduate work in history, but my mentor had always wanted to have a dual program where someone got a Ph.D. in legal constitutional history and a law degree, so we just invented that sort of dual program and I ended up with a Ph.D. in history and a law degree, with no intention of ever practicing law. I taught history for a couple of years at the University of Virginia. The best way I can say it is that I really wasn’t cut out to be an academic, so I ended up moving into the law.

This was the early 1970s. I was initially a civil rights lawyer with the Department of HEW [or Health, Education and Welfare] in Kansas City, Mo., where I had grown up. I actually worked on a [historic] Kansas City desegregation case [which eventually became Missouri v. Jenkins]. Once that was done, I really wanted to get out of government. The next raise would have trapped me for the rest of my life. I ended up with a law firm [Linde Thomson], and they made me half a real estate lawyer and half a litigator. That was at a time when specialization wasn’t quite as pronounced as it is today and when bankruptcy was just the opposite of what it is today. Nobody really did it. Only desperate young lawyers like me trying to make a living would even think about it then. So these three components—real estate law, bankruptcy, litigation—are things that I stayed involved in, in some way, for the rest of my career.

What are the types of clients you primarily represent?

It’s mainly financial institutions. My largest client, and one of the firm’s largest clients, is KeyBank. Another major client of mine is Prime Finance. They’re a New York-based bridge lender that primarily raises their capital through funds. We’ve been really successful in the nonbank, alternative lender space [too], even though KeyBank is probably our largest client. Beyond myself, the firm has done work with Extell Development Company over the years. Our Chicago office has a very dynamic real estate practice and does a lot of work around the country in student housing and also in charter schools.

As far as alternative lenders go, are you seeing them become more active now that banks are pulling back because of regulations?

Yes and no. Of course, that’s been the whole story since the [savings-and-loans] crisis of the late 1980s. Banks were just out of the business of lending in a way. Right now for example, you would have thought that this year especially, nonbanks would have been incredibly successful because the banks have been hit with [the High Volatility Commercial Real Estate rule] and just general regulatory pressure and so on, but then [early this year] the bond market went crazy with spreads having blown out and really shut [commercial mortgage-backed securities] down. It’s amazing how correlated things are. When the insurance companies did well, banks made all kind of loans, but the nonbanks really have not done so well this year. You would think that is just a bump and they’re going to continue to be able to expand because they just don’t have the same regulatory pressures. They will eventually—someone is going to want to regulate them.

What other trends are you seeing in real estate finance now?

People are scratching to figure out what’s around the next bend, especially anything related to capital markets. To me, the most interesting thing that’s occurred over the last few years is the emergence of nonbank bridge lenders, people like Prime Finance, that are not raising money through CMBS but raising it through funds and doing floating-rate, shorter-term lending, like banks have traditionally done. That’s really an important and valuable source for developers that they don’t have when the banks get seized up or feel a lot of pressure from regulators.

When it comes to risk retention, are you worried that B-piece buyers in CMBS deals will start closing shop?

This may be a different set of investors, but there are people who are raising 10-year money to be in that market.

So you think there’s going to be new players in that space?

I think there already are and there will be more. There will be new players coming into that B-side, but you have to think that the 40 CMBS lenders are going to drop to something like 20 or 25.

Originally people were worried B-piece buyers would disappear. Why has that sentiment changed?

People probably misjudged the amount of money out there sitting on the sidelines and the ability of people to marshal—back to [the idea] that nature abhors a vacuum and someone is going to fill it. CMBS is too valuable a product to go away, or at least to go away without a fight. Especially for B- and C-properties all over the country, that’s been in some ways the main financing mechanism. It got somewhat of a bad rap in 2008 and 2009 because it actually got a spillover from [residential mortgage-backed securities], which really was totally out of hand.

We have a client that immediately started raising funds to invest in B-pieces, specifically geared to this risk retention model. It’s just such a creative financing world out there that people are not going to just die without a fight, but the larger institutions will be the one withstanding more at the end of this. It’s not just risk retention. It’s Regulation AB II where [originators] have to sign off on reps and warranties, and that may be more significant than anything.

Now that it has been nearly nine months since Reg AB II has been implemented in the CMBS market, what feedback are you getting from clients?

I think there’s been some reluctance to buy [smaller originators’] product, when you, the big guy, have to make the warranties and reps. Can you really look back to that [smaller CMBS shop]? I think that’s actually caused some difficulty.

Are you doing a lot of bankruptcy work right now?

I’m sure glad I haven’t been mainly a bankruptcy lawyer—there just have not been significant bankruptcies, relatively speaking. In the 1990s I was basically doing nothing but bankruptcies. The biggest thing that’s changed the whole landscape [since then] is the invention of bringing recourse, meaning if you have nonrecourse financing and file a bankruptcy it becomes full recourse to the individual. There used to be all of these bankruptcies filed just to slow down a lender, just to take the asset hostage and negotiate the best deal with a lender. When your risk is to go from having a nonrecourse loan to a full-recourse loan with undervalued property, that changes the whole ballgame. So a huge amount of what filled the bankruptcy courts back in the 1990s didn’t even happen in 2008, 2009 and 2010.

On the other hand, I am doing a significant amount of work coming out of the Residential Capital bankruptcy. I represented a group of class action plaintiffs who had hundreds of millions of dollars of claims coming out of truth-in-lending violations. I got involved on the creditor’s committee in that case and am now general counsel for one of the borrower-claims trusts that was created out of it.

When someone comes to you and wants to file for Chapter 11 bankruptcy, what are some of the biggest misconceptions they typically have?

I’m going to be a little broader than just real estate, because really the more interesting types of bankruptcies are in operating businesses. What I’ve heard since I was a young lawyer is that “if we file for bankruptcy, all our customers are going to leave.” That has never happened in any case I’ve been involved in.

People [also] have a misconception about how radically you can treat a lender in a bankruptcy. For example, people think the phrase “cram down,” means something that it doesn’t. It doesn’t mean you can cram down debt [from a lender] and make debt go away. What it defines is under what conditions you can cram a plan down [a lender’s] throat that he doesn’t want to take.

What do you make of all the retailer bankruptcies, like Sports Authority, that we’re seeing today?

First of all, you’re not seeing very many. And you’re not seeing enough for the bankruptcy lawyers, I’ll tell you that much! There are the oil and gas bankruptcies and then retail is in a complete transformation. The one thing that’s just mind-boggling is to see what certain malls are being valued at. I just saw one that when the loan was originated back in the mid-2000s—and there are so many examples of this—it had an $85 million valuation. The foreclosure was $8 million, and there was a 100 percent loss on [the deal]. So-called regional malls are in deep trouble all over the country, and retail itself is in the process of this transition. In one sense, the retail bankruptcies have been going on for a long time and will no matter what just because people get out over their skis.