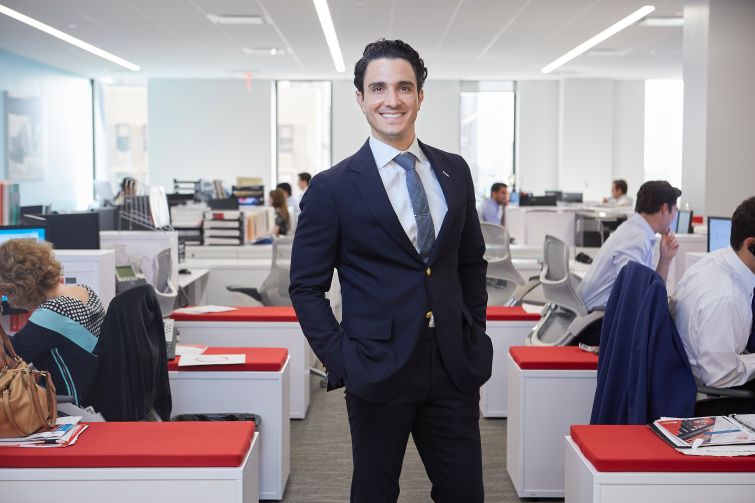 Last year was a big one for Cushman & Wakefield Vice Chairman Stephen Palmese.

In October, he represented Treeline Companies in its $85 million sale of a four-story office condominium at 180 Livingston Street in Downtown Brooklyn to Thor Equities. The 165,210-square-foot property between Smith and Hoyt Streets includes 142,525 square feet of additional air rights. (A spokesman for Thor said the company plans to hold onto and operate the property.)

And then in December, Palmese alongside colleagues Robert Knakal, C&W’s chairman of New York investment sales, and James Nelson sold 9 Dekalb Avenue (also in Downtown Brooklyn) for J.P. Morgan Chase to the Chetrit Group and JDS Development Group for $90 million. The property will be home to Brooklyn’s tallest tower, a 1,066-square-foot, 73-story behemoth behind the landmarked Dime Savings Bank of New York building.

“To look at the Brooklyn skyline and know that you were part of the puzzle makes me feel good in some respects,” Palmese told Commercial Observer recently at C&W’s new Brooklyn office at 1 Pierrepont Plaza in Brooklyn Heights, where he is based.

This year has not been too bad either.

In fact, Palmese, 34, has been the leading investment sales broker in Kings County for C&W (and Palmese said for all firms) with transactions totaling more than $200 million thus far this year.

One highlight was the closing of the six-building Sterling Portfolio in April, a package of residential properties in Prospect Heights and Park Slope with 71 units, for $41 million. He represented investors Jerome Kessler and Harvey Stashower in the sale of the walk-up buildings to Coastline Real Estate Advisors.

Most recently, Palmese closed on the sale of 249 Varet Street in East Williamsburg, which was the site of the New York Loft Hostel, for owners Juan Figueroa and Jon Colsky. The 25,400-square-foot property traded hands in September for $21 million to developer David Levitan, who will continue with city-approved plans to turn the building into a homeless shelter.

“He knows the intricacies of the business of buying and selling a property like this,” Figueroa said. “He is a diplomatic person that will be pushing to sell…but not [for figures that are] too low that sellers would lose money.”

Figueroa and his partner have plans to open a new hostel in Bushwick.

“We are content with what we got, and it will allow us to do something bigger and better and keep us going,” Figueroa said.

With a clean shave and slicked back hair, Palmese is a youthful father of a 3-year-old boy with another son on the way, and apparently, he’s the person people look up to at C&W’s Brooklyn office.

“I use him as an example when recruiting and training,” said Betty Castro, the managing director and market leader for C&W’s Brooklyn and Queens offices. She tells new hires, “ ‘Look, if you do this disciplined approach, you can be like Stephen and make this kind of money at some point.’ I use him as a role model to recruit and train and motivate the young folks.”

Castro continued, “He is smart, intelligent and charismatic. He has the ability to capture a room when he walks in. And when he speaks he’s very articulate and extremely knowledgeable about the Brooklyn market. He conducts himself in an extremely polished and professional manner.”

Palmese grew up in Staten Island, the youngest of four children. Taking a day trip to Manhattan was a special event for Palmese as a kid. And the city’s skyline was always attractive to him.

“For me growing up, the center of the universe was Manhattan and every special occasion and holiday that my family would share, we’d celebrate in Manhattan,” Palmese said. “Since I was a little boy, going into Manhattan and just staring up into the skyline was something that I became enamored with.”

Palmese was interested in urban planning but wanted to be in an industry he considered more financially rewarding. He also considered acting (which we’ll get back to in a bit).

He studied international finance and small business management at Georgetown University in Washington, D.C. Following his 2004 graduation, he decided to become a broker, unlike a lot of his peers.

“At the time my friends graduating from school were all going into corporate finance and investment banking,” Palmese said. “And I looked and said, ‘All the smart guys and gals were going into finance.’ And not that there weren’t incredibly smart people in real estate, but the tide wasn’t heading there. And I kind of thought there was an albatross. Why go toward competition? I knew [less competition] represented opportunity.”

He launched his career with Massey Knakal Realty Services 12 years ago (C&W purchased Massey Knakal in 2014), after he was introduced to the firm by a friend of his sister-in-law, Jonathan Hagerman, now an executive manager director at C&W.

Palmese began selling smaller investment and multifamily assets in the residential-heavy Brooklyn sections of Sunset Park, Bay Ridge, Dyker Heights and Sheepshead Bay. The neighborhoods were far from the Manhattan skyscrapers he was attracted to, but he was inspired by the potential for development in Brooklyn.

“When I first started, Brooklyn real estate was not sexy,” Palmese said. “To my benefit, Brooklyn has had tremendous natural growth. And the average transaction size grew from $800,000 to $3 million to $10 million.”

After nearly a decade of working in the area, he started closing bigger and bigger deals. And as his real estate career took off, Palmese decided to revisit another passion: the theater.

Together with three friends, he produced the play The Killing of Sister George in December 2012 in the Long Warf Theatre in Connecticut. The production, which ran for 45 days and starred actress Kathleen Turner, was a revival of Frank Marcus’ 1964 play about a radio actress, whose career was at risk after a public meltdown.

Turner “captures the character’s surface qualities with ease: the bawdy humor, the leathery voice to match a tweedy exterior, the streak of sneaky sadism in her relations with her young lover,” gushed The New York Times review.

It was “challenging but fun” to forge what was his first large entertainment project (not counting much smaller-scale matters he’s worked on). And Palmese can see it through the lens of a real estate professional, as much as anything else.

“I’m a producer, so I’m the developer,” Palmese said. “We had a product, which we had to get the rights to, which we had to buy—so that was us buying the land. We then had to find investors to raise money for the play. We couldn’t go to a lender, so we went to friends and family.”

They raised $250,000 to produce it and the theater company chipped in another $250,000. Palmese said the production broke even and they were hoping to do more shows in Los Angeles or New York, but “Kathleen Turner got busy [and] she wanted more money.” Because of “all of the things that become an issue—ego, money, time—we never got to L.A. or New York.”

But for Palmese, the show always goes on. The broker is hoping to produce a movie next. Actor James Franco is his top contender for the lead role, and he is working with a “fairly prominent” filmmaker in local circuits, Palmese revealed with a bright smile. (Who? He wouldn’t say.)

Working with said filmmaker would give him a “little more street cred,” Palmese said, joking that he may be an extra in the movie.

But his acting ambitions aren’t impeding his day job.

Palmese is marketing some of the largest development properties in the borough. That includes the 2.65-acre development site at 500 Kent Avenue on the Williamsburg waterfront for Consolidated Edison, with colleagues Brendan Maddigan and Andrew Behymer.

And then there is 333 Johnson Avenue in East Williamsburg, a 127,900-square-foot former manufacturing site with the potential for building up to 326,000 square feet. Palmese, Maddigan and Knakal are offering the property for sale for landlords Normandy Real Estate Partners, Royalton Capital and Sciame Development.

Perhaps most intriguing is a 16.8-acre site in Coney Island at 2731 West 12th Street, which is jammed between the Belt Parkway and the Coney Island Creek. Palmese and a C&W team are selling the property for energy company National Grid. The site has 1.47 million buildable square feet. While Coney Island has started to see some more entertainment-related projects and larger multifamily buildings, many investors are holding onto their properties with plans for massive development, as CO previously reported. This site could yield a mega-development in the future, Palmese envisioned.

“It was a plant for them,” he said. “It was demolished and cleaned up. The site is big enough…for a ball club or soccer club.”

Currently, about 70 percent of Palmese’s business is in Brooklyn with the rest in Manhattan. He’ll tell you though, he has no intentions of leaving the borough behind for that legendary skyline, which first lured him into real estate. That may be to his benefit—again.

“There are thousands of brokers. And those that do the best, specialize in a certain type of transaction, or an area—people who can differentiate themselves,” Knakal said. “I think being the Brooklyn expert, there is a lot of value in that. If you started off in one thing and started to do others, it could dilute the value.”

But is he really committed to Brooklyn if he lives in Manhattan’s West Village? He said his family is looking to relocate to Brooklyn, when the time is right.

“Brooklyn is too expensive,” Palmese said. “When Brooklyn was cheaper, I didn’t have the money, but now that I have some money I’m playing the market and waiting [until it softens].”