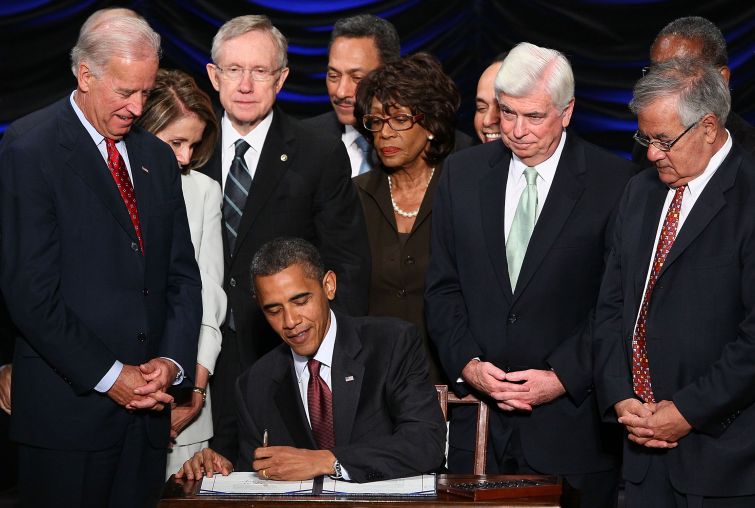 A mere few months after its sixth birthday, the Dodd-Frank Wall Street Reform and Consumer Protection Act is facing a challenger.

“It’s been six years since the passage of Dodd-Frank. We were told it would lift our economy, instead we are stuck in the slowest, weakest, most tepid recovery in the history of the Republic,” Texas-based Hensarling said in an opening statement before the committee on Tuesday morning. “The economy does not work for working people.”

Hensarling went on to say that instead of ending “Too Big to Fail,” the Dodd-Frank bill codified an orderly liquidation authority, and that his bill instead would mean “economic growth for all and bailouts for none.”

Ranking Democrat Representative Maxine Waters was equally critical of the proposed CHOICE Act. “I’m more than disappointed—I am amazed that we are considering this highly partisan, damaging piece of legislation,” said Waters, who pointed out Hensarling’s omission in mentioning the two million fraudulent accounts opened by Wells Fargo last week in his opening statement while simultaneously pushing a bill that several say favors big banks more than consumers. Waters was one of several speakers to mention the Wells Fargo scandal and also the $125 million golden parachute that was given to the executive who oversaw the unit responsible for the fraud.

“The Dodd Frank Act made sweeping changes to our financial regulatory system so that our economy would never again be threatened by special interests, yet here we are pretending that the crisis never happened considering toxic legislation that takes us exactly in the wrong direction,” Waters said. “Let us be clear who would benefit from the Republican’s wrong choice. Wall Street and other special interests who have been fighting against financial reform since it was enacted. The regulatory roll-backs in this bill know no-bounds. Nearly all the rules we enacted to make banks safer and stronger would be repealed.”

The CRE Finance Council, in conjunction with Steptoe & Johnson, outlined the most pertinent areas of the bill for the commercial real estate industry in a CREFC Government Relations alert the day of the meeting, the key topic for the industry organization being risk retention. The CHOICE Act would eliminate risk retention for all asset classes except for residential mortgage-backed securities.

The bill also proposes to set examination standards for financial institutions and commercial loans. For example, commercial loans would be barred from carrying a non-accrual status due to the loan deteriorating in value, and the bill would also require a modified or restructured loan be removed from non-accrual status if the borrower proves their ability to perform on the loan over specified time periods, as outlined in the CREFC alert.

In July, Commercial Observer spoke with Robert Pittenger, a Republican congressman from North Carolina, who spoke up in favor of the CHOICE Act today and criticized Dodd-Frank “There is lack of capital and credit in the market, and that small entrepreneur who has been the lifeblood of our economy, can’t get capital. [The American economy] didn’t grow because we had a great government, it grew because of opportunity and freedom. Today that capital is not to be found, because the banks are too restricted,” especially small- and medium-sized banks, he said.

In the same interview, former U.S. Rep. Barney Frank weighed in on Hensarling and his alternative to the legislation that he and Christopher Dodd co-penned. “Three-and-a-half years into his chairmanship [of the House Committee on Financial Services] he comes out with an outline of a bill that nobody believes can even be considered.”

Perhaps only time will tell.