I Am Samuelian: The Lowdown on the Guy Tasked With Transforming Governors Island 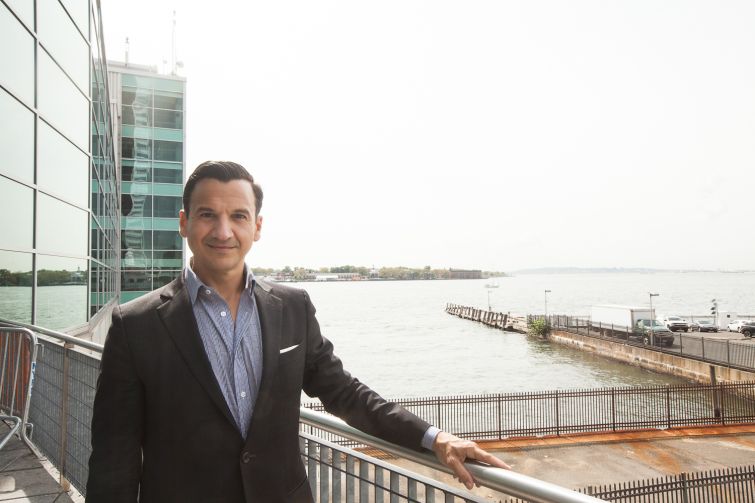 On Monday, Michael Samuelian took a five-minute ferry ride from Lower Manhattan to Governors Island in the heart of New York Harbor for his first day of work.

The 44-year-old newly minted president and chief executive officer of the nonprofit organization, The Trust for Governors Island, has been tasked with transforming the 150-acre island into a 365-day mixed-use community. The city-established trust was created to operate, plan and redevelop the island.

This is no small endeavor given that the island closes to the public from the end of September (as in this Monday) until the end of next May. In its hibernation mode, the island’s population dwindles to roughly 600 from hundreds of thousands during the summertime. The only people that make their way to the island offseason are those attending The Urban Assembly New York Harbor School, park staffers and contractors.

In 2003, the federal government sold the remaining 150 acres of Governors Island to the city and state for a nominal cost. Provisions in the deed called for much of the island to be used for public benefit. Artists’ residences, dormitories and hotels are permitted uses, but permanent residential units are precluded from being erected on the island. The island will get its first commercial tenant in 2018, a 78,000-square-foot day spa, QC Terme.

Commercial Observer talked to Samuelian, who lives with his two Beagles, Daisy, 6, and Henrietta, 8, in Greenwich Village, last week about leaving Related Companies, the advantage of having development constraints at Governors Island and being a marathoner, not a sprinter, when it comes to planning.

Commercial Observer: Why did you leave Related after 11 years—eight of it focused on Hudson Yards—for this gig?

Samuelian: I’m excited to take some of those ideas in terms of creating great spaces and bring them to Governors Island. As a New Yorker, I think that the public realm is one of the most important parts of New York. In many cases people focus more on our buildings, but it is really the public spaces that bring people together, and I think that Governors Island has done an amazing job in creating a public space.

[Also,] I’m interested in whether development—institutional, cultural, academic, commercial or hospitality—can actually make the public space better and figure out what that real balance of uses is. I think one of the things we want to make sure of is that the island is and will remain public.

Governors Island is quite remote.

That is one of the challenges—how to make remoteness an attraction. Because it is an island, there is something magical about it. As a New Yorker, I can say it’s very difficult to find places to relax where you can be out of the action and the hubbub of the city and the traffic and the noise. [But] once you’re on the ferry, you have this magical feeling and this detachment, and you can automatically relax. No car is really on Governors Island. You just feel the breeze of the harbor, the birds, you see the Statue of Liberty, you see the skyline. So there’s a sense of detachment that I don’t want to lose either.

Have you always been an advocate for Governor’s Island?

When I worked in Lower Manhattan many years ago…Governors Island was on the radar…because I was predominantly responsible for the eastern waterfront that runs from the Battery up to the Manhattan Bridge.

When were you on the island prior to landing the job?

I went there in August. I had predominantly been there for events as either part of The Friends of Governors Island [of which he is a member] or a party or something. So I took the subway to Court Street in Brooklyn, and I wanted to find my way because I had never been there from Brooklyn [which] is an increasingly popular ferry stop for us in the summer. So I walked to Pier 6 and stood on line like a civilian to see what the experience was like to actually get onto the island and I definitely had some lessons learned. I almost wanted to take pictures of the people queuing up because it was literally a cross section of New York. It was women in burkas, and guys in yarmulkes, and Hispanic families and Asian families and yuppies. It’s not just a park for one type of person. And that was really inspiring to me. And then once I got onto the island, I got a Citi Bike and did a circuit to orient myself. There was drone racing occurring on the south island, and you had the Brooklyn Music Festival happening at Colonels Row. So you have these very disparate uses occurring at the same time in the same place and not conflicting with each other. That’s what New York is.

Why did you want the job?

When I interviewed, we talked a lot about the goals for the island, what my goals were professionally in terms of coming back to work in public service. Hudson Yards is a fantastic project. I have great pride in what we’ve accomplished there, and I’ve spent the past eight years working on that project [as vice president for planning and design], but in many ways the die is cast on that. It’s not done by any means, but from my perspective as a planner the work is basically done. So I can just about watch it the way every other New Yorker watches it rise in the skyline. This is a great opportunity for me to help lead and understand the vision of the city—and make sure that it happens because so much great work has been done by Leslie Koch [my predecessor who retired] in terms of building this park, which is becoming more and more loved by New Yorkers.

And now we’re ready for the next stage of development.

What do you think is the most interesting part of the island’s history?

I’m just learning so bear with me. What’s interesting to me and what I want to resolve in my head is how the island can move forward into its next couple hundred years. It was a fort on an island in the middle of the harbor—it briefly defended the harbor—but really it was an administrative center. Castle Williams was used as a prison for a very long time. Even Civil War prisoners were held there from the south, so it has this interesting history and this legacy that we have inherited. And very, very few people went onto Governors Island. There’s a rare person who grew up there because their dad was in the Coast Guard, but it was never public. It was this essentially publicly owned private island in the middle of the most densely populated city in the country. So you have this ironic kind of detachment. It was federally owned until [2003] when it was handed over [to the city and state]. We have this unique opportunity, almost like it landed from Mars in the middle of the harbor, and we can do something fantastic with it, and that’s what I think is so inspirational about the opportunity. We can’t make another Governors Island. We would never be able to afford it.

It can’t go residential so you have some development constraints.

You have a colorful resume. How’d you get where you are today?

I studied architecture at Cooper Union, here in New York. I still teach there today. From the beginning I realized I wasn’t the kind of architect who was very interested in the detail of how the wall hit the floor. I was always much more interested in the social history of how buildings got where they are—so the political history of how a building came to be or the real estate behind it, and that pushed me into studying urban design in graduate school. So I went to Harvard [University] to study urban design, which is basically urban planning for architects, which is where I got exposed to how we think about cities, and the fact that the decisions we make, even small decisions, really change cities. And after I finished up at Harvard I came back to New York and worked for a great corporate architecture firm, HOK, doing a lot of commercial and institutional and transportation work, but then I got a little bored, and then 9/11 happened, and I was wooed by a friend of mine who works at City Planning to come to work on Lower Manhattan. I was director of Lower Manhattan Special projects, which basically meant I worked interagency for City Planning.

How did you then land at Related?

I worked for this fellow, and he was the director of the Manhattan office, and he had moved over to Related, and then at that time, Related and Vornado [Realty Trust] had won the Moynihan Station project. So my first few years at Related were working on Moynihan Station.

I like big projects. I like the complexity of big projects. I’m a patient person. I think as a planner you need to be. I joke with people: I’m a marathoner; I’m not a sprinter.

What do you like best about New York City?

What would you like to see on the island in five years?

How much square footage do you have to work with?