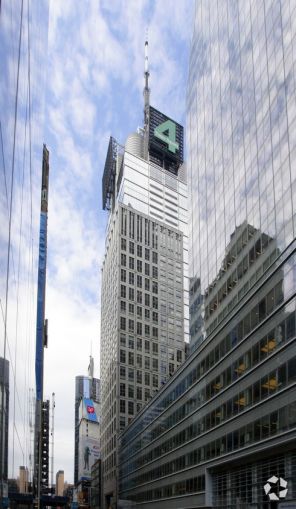 After nearly two years of waiting to fill up the former Condé Nast space at 4 Times Square, landlord Durst Organization seems to have hit its stride at the Midtown skyscraper.

Law firm Fross Zelnick Lehrman & Zissu has signed a 41,221-square-foot lease at the 1.9-million-square-foot building at Broadway and West 42nd Street, a source familiar with the deal told Commercial Observer. Currently based at 866 United Nations Plaza on Manhattan’s East Side, the firm will occupy an entire floor of 4 Times Square in a 15-year lease.

A spokesman for Durst declined to comment on the transaction, which is the second at the building in recent weeks. ICAP, a financial securities company, signed a deal for roughly 82,000 square feet, occupying the 13th and 14th floors of the 48-story tower. The company has the option to expand to the 15th floor, too.

While asking rents in this lease were not immediately available, the landlord was looking for $85 per square foot in the ICAP deal, as CO reported earlier this month.

Tom Bow and Rocco Romeo of Durst represented the landlord in-house, while Mark Weiss and Robert Eisenberg of Cushman & Wakefield represented the tenant and did not immediately return a request for comment via a spokesman.

With the Fross Zelnick lease, Durst has leased up more than 120,000 square feet of the 817,000 square feet vacated by Condé Nast at the end of 2014. The mega-publisher of multiple magazines relocated two years ago to a 1.2-million-square-foot space at 1 World Trade Center, which Durst owns with the Port Authority of New York & New Jersey.

Fross Zelnick will not be the first law firm to call 4 Times Square home. Skadden, Arps, Slate, Meagher & Flom currently occupies the upper floors of the 17-year-old Midtown property. The firm is slated to leave 4 Times Square, however, and move to the under-development 1 Manhattan West on the Far West Side when construction is finished in 2020.